This is also the most balanced of all double-breasted styles. The top of the two fastening buttons is placed at the waist to draw in the jacket at the narrowest part, while buttons are placed below and above the waist for balance. When there is only one row of two buttons at the waistline, the buttons are in an unflattering horizontal line. When a second row of two buttons is added below the waist, the jacket looks bottom-heavy. So a row of vestigial buttons above the waist are added. The buttons are placed further apart that the fastening buttons to follow the V-shape of the opening and to make the waist look smaller. The buttons placed further apart at the top also mimic how a jacket would spread open if the top buttons were aligned with the rest to be able to fasten (a 6×3 configuration) but left unfastened.

This classic style removes the bottom row of buttons from the 6×2 and the remaining buttons are usually lowered so that the jacket buttons below the waist. Sometimes the bottom row is left at the waist, which can make the jacket look top-heavy but fasten at a more natural place. By placing the bottom row of buttons below the waist, the jacket looks more balanced and the lapel line is lengthened for a more flattering look. But a lower button stance looks more relaxed and will place less emphasis on the waist because the buttons will not be at the narrowest part of the body. A button stance that is too low can make the jacket, along with the wearer, look saggy.

In this 4×1 style, the buttons are placed in a keystone formation, with the top buttons placed further apart than the lower buttons to emphasize the exaggerated V-shape of this style. This also mimics a fully button-able 4×2 with the top buttons left open The 4×1 is the most traditional style for a double-breasted dinner jacket, but it is also acceptable for suits and blazers. This style is also associated most with continental tailoring and the 1980s, but tailors all over the world in all eras make use of this style. Roger Moore’s tailor for his 1980s James Bond films, Douglas Hayward, preferred this style, and not just because it was popular at the time. Moore wears a suit and a dinner jacket in this style in Octopussy and A View to a Kill, respectively.

The 4×1 is often called the “Kent” because Prince George, the Duke of Kent, was an early adopter of this style in the 1930s. The Duke of Kent, along with his older brother the Duke of Windsor, fastened their 4×2 double-breasted jackets only at the bottom. When they leave the top button of a 4×2 unfastened, the jacket spreads apart at the top to create a keystone look even though the buttons are sewn in a rectangular formation. Late in life, the Duke of Kent had his double-breasted jackets made in the 4×1 formation to refine the effect that he achieved from buttoning his 4×1 jackets at the bottom.

Because the 4×1 has fewer buttons than the 6×2, it can be more flattering on shorter men because it breaks up the body less.

This is a naval-inspired double-breasted jacket that is ideal for blazers, such as the blazers that George Lazenby wears in On Her Majesty’s Secret Service and that Roger Moore wears in The Man with the Golden Gun. It is an older style of double-breasted jacket that was popular in the Edwardian Era. Besides blazers, it also works well for suits, but it is most commonly seen on overcoats and pea coats because the high buttoning wears warm. This jacket buttons high on the chest, and because of that it can look blocky and unflattering on shorter and heavier men.

This is a minimalist style that is good for dinner jackets as well as for more fashion-forward suits and other jackets. The single row of buttons on this jacket is either placed at the waist or below the waist. Because there are two buttons on a horizontal line, it tends to widen the body and works best with a narrow wrap. The horizontal emphasis on this jacket makes it one of the least popular double-breasted styles. When the buttons are placed below the waist, it widens the hips rather than the waist and creates a longer lapel line to make up for widening effect of the buttons.

Roger Moore wears this style when aiming for a more fashion-forward look in The Man Who Haunted Himself. His buttons are placed at the waist.

This style is similar to the traditional 6×2 style but lacks the vestigial buttons. It works well on blazers and sports coats with a patch breast pocket, since there is no button taking up real estate in that area. On jackets with an ordinary welt breast pocket, the space can look empty and the jacket can look unbalanced and bottom-heavy with four buttons at the waist and below. However, this is still a traditional style, particularly for those who don’t like vestigial buttons. Top buttons on the 6×2 remind some people of nipples, and if that is the case the 4×2 is a fine alternative. It also works well with narrow lapels because higher buttons can compete with narrow lapels. There is more on this below.

The 6×1 is based on the 4×1, just with an extra row of vestigial buttons. This style always fastens below the waist, and the buttons are placed in a keystone formation to follow the deep V-shape of the lapels. It was a fashionable double-breasted style from the mid-1980s through the early 1990s, when the button stance was placed extra-low. This style is able to take a lower button stance than 4×1 because there are more buttons to fill the space. The low fastening creates a long lapel line, which can be flattering on a shorter man, but if it fastens too low the leg line will appear shortened and the torso will look awkwardly proportioned.

This is a naval-influenced style, but having vestigial buttons at the top instead of functional like on a true naval uniform (the 8×4) brings this into civilian territory. The style is highly unusual, but it gives a regal look to a navy blazer. Emilio Largo in Thunderball and Prince Charles wear this style on navy blazers.

Of the three fastening buttons on this style, all three or only the top two may be fastened.

This is the style of the naval officer’s uniform, such as James Bond’s Royal Navy commander’s uniform. This style should be avoided for jackets in civilian dress, but it can work for an overcoat, such as the bridge coat that Daniel Craig wears in Spectre.

All four buttons on this jacket should be fastened.

With a wrap that is too narrow, the slimming effect can backfire. The jacket will look wider because there will be too much space on the sides of the jacket.

The Relationship of Wrap and Lapel Width

Wrap and lapel width are not correlated, but they need to balance each other. Narrow lapels work best with a narrow wrap (Figure 5A) to achieve the ideal V-shape. The top buttons should not be spread wider than the distance between the lapel points. If the wrap is too wide for the lapel width, the jacket looks unbalanced and bottom-heavy. Figure 4A shows narrow lapels on a jacket with a wrap that is too wide, and the emphasis is placed incorrectly on the top buttons because they have the same spread as the lapel points. This configuration looks unbalanced and can be fixed with wider lapels or a narrower wrap. It can also be fixed by removing the top buttons and making the jacket a 4×2, which better ensures that no buttons are spaced wider than the lapel points and the jacket achieves a V-shape.

A wider wrap needs wide lapels (Figure 5B) for balance. But wide lapels can also look good with a narrow wrap because the V-shape of the jacket is accentuated. Roger Moore’s double-breasted jackets in The Man with the Golden Gun have a narrow wrap to accentuate his waist, but they have wide lapels. The overall effect is an exaggerated V-shape that makes him look more masculine. 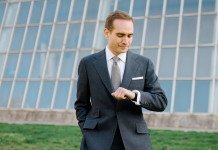