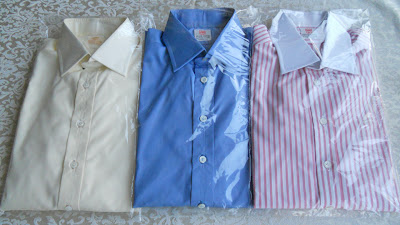 The Suits of James Bond reader David Marlborough has kindly allowed me to write about his bespoke shirts from Frank Foster, Roger Moore’s long-time shirtmaker who also made shirts for George Lazenby in On Her Majesty’s Secret Service and Sean Connery in Never Say Never Again. Foster’s relationship with Moore began during his tenure on The Saint, and through the years Foster has made many unique pieces for Moore, including his shirts in The Persuaders with button-down cocktail cuffs and his controversial safari shirts. Foster is still one of the world’s foremost shirtmakers and operates from Pall Mall, London. 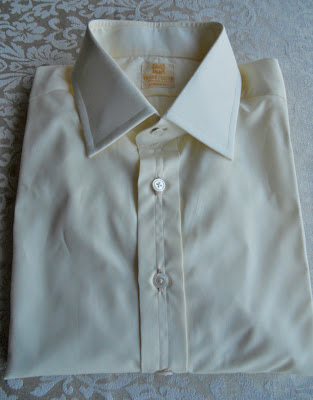 Mr. Marlborough bespoke a number of shirts from Foster in various cotton poplins, all with his familiar spread collar. He requested a taller collar similar to what Foster made for Roger Moore, though not so tall that it would ever look outdated. The height is slightly taller for a taller neck and the points are long enough that they stay under the suit’s lapels. One unique point of the shirt is the placket design—the stitching is rather close to the centre of the placket. Most shirtmakers have their own way of stitching the placket and their own preferred width, and not all shirtmakers would be willing to stray from their norms. The shirts are all adorned with simple 4-hole mother of pearl buttons, with the exception of 2-hole buttons on the blue shirt. Marlborough chose a 2-button mitred cuff for his shirts, the same as what Roger Moore wore in For Your Eyes Only. Foster’s standard includes gauntlet buttons on the sleeves. 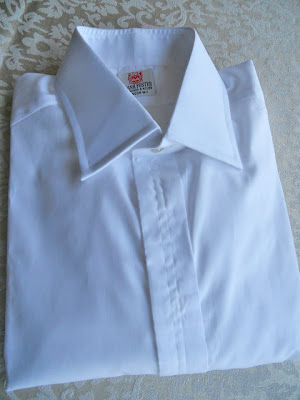 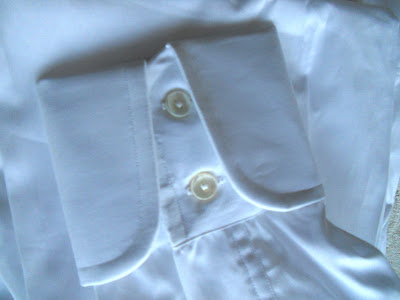