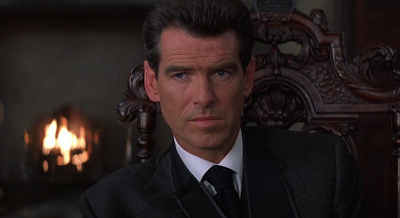 Whilst in Scotland in The World is Not Enough, Bond wears a Cheviot tweed suit made by Brioni. This suit is charcoal (probably in a black and grey birdseye weave) with a blue windowpane, city colours on a country suit that work quite well. The suit coat has Brioni’s typical straight shoulder line, but the chest was cut with some drape unlike the usual clean-chested Brioni. The button three front has a low button stance and the lapels roll gently over the top button. The suit coat has double vents and four buttons on the cuffs, plus slanted pockets with a ticket pocket complete the English country look. Bond wears his darted front trousers with a belt. These trousers appear to have plain bottoms hemmed with a guardsman slant. The heavier weight may explain the lack of Brosnan’s usual turn-ups. 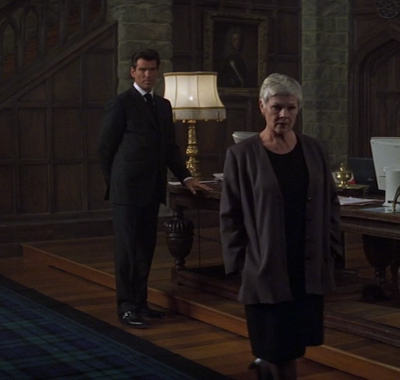 Bond wears a white shirt from Turnbull & Asser with a spread collar and double cuffs. The tie is wool knit tie in black, since he just came from a funeral. Bond’s shoes are black Church’s Presley monks. Overall the outfit is a bit informal for a funeral, though the dark city colours and black shoes help. The overcoat Bond wears over this suit will be covered later. 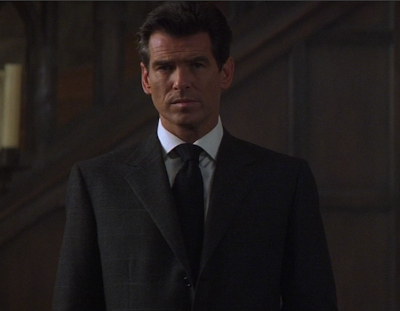