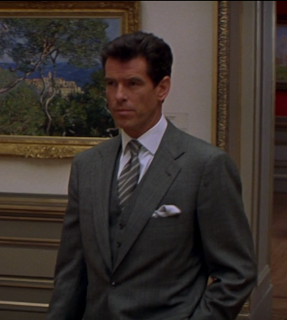 Just a few months before the release of The World Is Not Enough, Pierce Brosnan starred in one of his most notable films during his tenure as Bond, The Thomas Crown Affair. Milanese tailor Gianni Campagna made Brosnan’s suits for the film for a total cost of $400,000, at $3,400 a suit, according to an article from the San Francisco Examiner. But like in the Bond films at the time, Turnbull & Asser made the shirts and Chruch’s made the shoes. Thomas Crown is a rich man with luxurious suits, and his clothes are most appropriate for the character. Though the look is more old-fashioned than what Brosnan wore for Bond, there are many similarities between the two characters’ clothing.

This three-piece suit is made from a fine hopsack glen check in light blue and black with a blue overcheck, and it is almost reminiscent of the famous three-piece suit that Sean Connery wears in Goldfinger. The jacket has a button two front, but the lapels have a gentle roll more like those found on a soft button three suit. Double vents, flapped pockets and four-button cuffs detail the jacket. The jacket has a clean, structured look with padded shoulders, yet the shoulders have a natural curve compared to the straight shoulders of Brioni. The waistcoat has a six-button front, with the bottom button left open, and four pockets. The full-cut trousers have double reverse pleats and turn-ups and are worn with a belt. In comparison to what he wore as Bond, these trousers are much fuller. 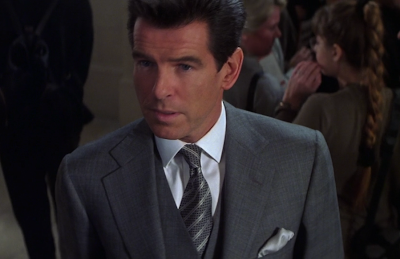 Brosnan’s Turnbull & Asser shirt is made from a white cotton herringbone. The shirt has a spread collar and double cuffs. The tie has a dark grey ground with black polka dots and light grey stripes. The puffed pocket square is light grey to coordinate the with the tie. Brosnan’s shoes are black plain-toe oxfords. 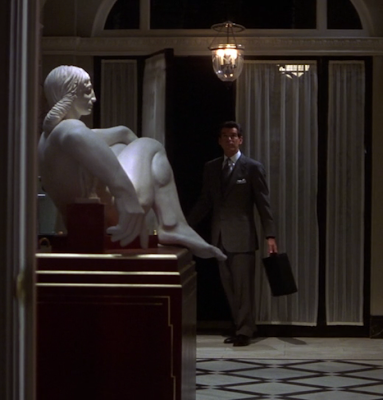