Michael Caine stars as the unsophisticated spy Harry Palmer in 1965 film The Ipcress File, produced by James Bond film producer Harry Saltzman. Palmer is quite the opposite of James Bond and lives a very unglamourous life. Unlike Bond, Palmer never looks perfect, he wears glasses, he does desk work, he wakes up alone and he shops at the supermarket. Palmer’s clothes, however, aren’t completely unlike Bond’s, but they still leave something to be desired. 1980s Bond tailor Douglas Hayward was famously Michael Caine’s tailor, but it is unknown if he made the clothes for The Ipcress File. 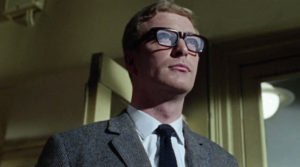 The jacket also has double vents, a single button on each sleeve—the jacket’s buttons are black plastic—and hip pockets with narrow flaps. Palmer sometimes wears the pocket flaps tucked in, like when he carries a folded newspaper in his hip pocket (see image at the end of the article). Keeping small items in outer pockets does enough to disturb the jacket’s lines without having items sticking out from the pockets. Palmer demonstrates the way no gentleman should carry his newspaper.

Palmer wears medium grey worsted wool trousers under the jacket. They have a darted front, slanted side pockets, an extended waistband, buckle side adjusters and a tapered leg with turn-ups. There ought to be a little more contrast between the jacket and trousers, and a shade lighter in grey would be enough to give the two pieces more separation. The trousers most likely come from the suit Palmer wears later in the film. Palmer’s black shoes keep within the city tones of the outfit. 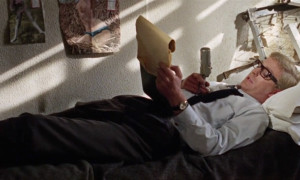 Palmer’s pale blue shirt is the least refined part of his outfit. Though the spread collar has a good width, the length of the collar points is rather puny. The collar is stitched 1/8 inch from the edge rather than the traditional 1/4 inch. The shirt has square single cuffs for cufflinks. These are not the stiff single cuffs that one wears for full evening dress but instead cheap, flimsy cuffs similar to the modern convertible cuffs that can be worn either with a button or with cufflinks. Palmer’s shirt has a breast pocket, which further brings the origin of Palmer’s shirt into question.

From Tailors with Love: Craig v Cruise, with Chris Laverty 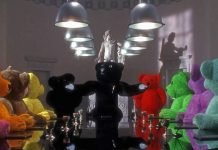