Though Kronsteen, played by Vladek Sheybal in From Russia with Love, is one of the less memorable Bond villains, he is one of the more interestingly dressed. In his final scene he wears a stylish alternative to the navy blazer: a slubby navy silk jacket. The jacket is has a draped chest with gentle waist suppression and extended—but soft—shoulders with roped sleeve heads, all of which suggest an English tailor made this jacket. Though it may have a tradtional cut, it also has fashionable 1960’s elements. The jacket appears to be a button one at the front with three buttons on the cuffs, and the buttons are covered in the jacketing silk. The narrow lapels have a generous roll to expose less of the shirt, and they also have swelled edges. The jacket has an open patch breast pocket and open patch hip pockets.

Kronsteen wears light grey worsted wool trousers to contrast the jacket. The trousers are cut with forward pleats, which balance well with the drape style of the jacket. His cream shirt is possibly silk and has a plain front without a placket. The shirt’s short point collar and double cuffs are stitched on the edge. Though black bow ties should best be kept with black tie, Kronsteen wears one as his signature look. It’s a narrow batwing shape, possibly in a barathea weave. It’s difficult to see Kronsteen’s shoes, but they are likely the same black lace-ups that he wears with his charcoal blue suit at the beginning of the film. 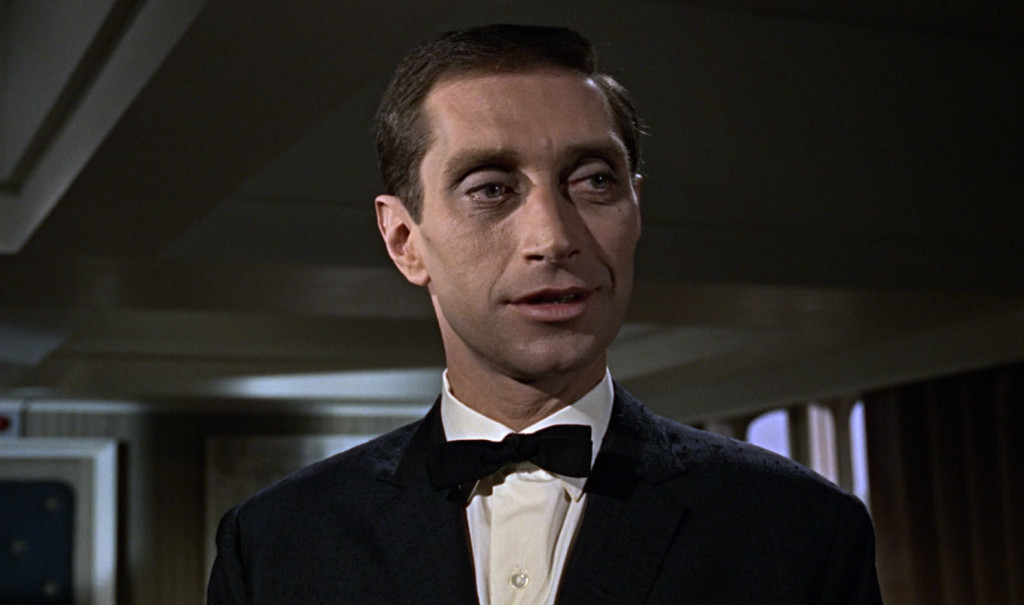 Kronsteen carries a pork pie Panama hat that goes well with the summery look of his silk jacket. Like a traditional Panama hat, it’s woven of cream-coloured straw and has a black ribbon. Though the bow tie and panama hat look rather costume-like together, with the right attitude some men could pull off this look today. And if the whole look is too much, a slubby navy silk jacket with patch pockets is a versatile warm-weather jacket that looks great dressed up or down, daytime or nighttime.