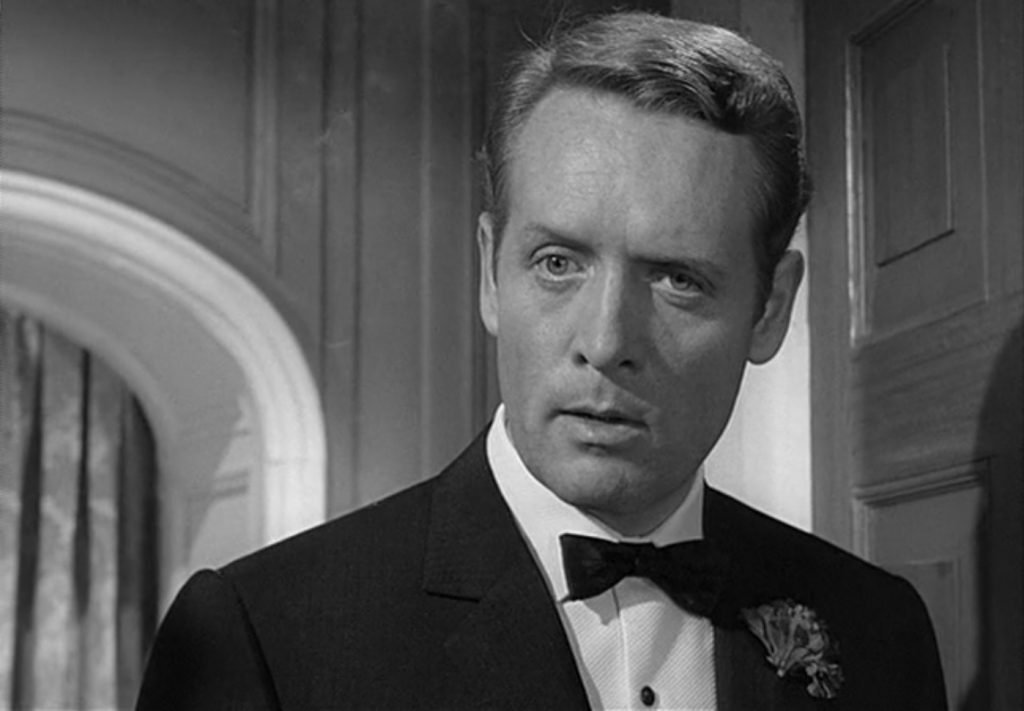 In the 1965 Danger Man episode titled “The Ubiquitous Mr. Lovegrove”, John Drake dresses in faux black tie. He wears a dark lounge suit with black tie accessories, something that should only been done when travelling light. However, this episode takes place at home in London, and Drake owns a dinner suit, so it doesn’t make sense for Drake to be wearing a lounge suit as a dinner suit. Black and navy suits are the best to wear in this situation, with charcoal working not quite as well. Danger-Man.co.uk has some colour stills from this episode, and the suit appears to be dark forest green. If the colours are accurate, it’s a flashy colour for a lounge suit, but since it’s not going to be mistaken for a business suit it works better in this situation. The suit also has a self-stripe, which elevates the dressiness. 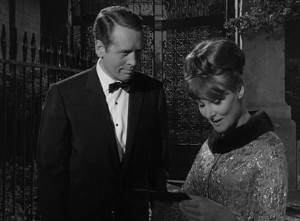 The jacket buttons two and has natural shoulders with roped sleeve heads, four buttons on the cuffs, jetted pockets, and no vent. The last two details make this suit work better for dressy evening wear. Peaked lapels would also help make a lounge suit work better for makeshift black tie, but this suit has notched lapels since single-breasted suits with peaked lapels weren’t so common in the 1960s. Drake wears the suit jacket with two pairs of trousers. The first pair matches the jacket, and it has double forward pleats and belt loops that are hidden under the cummerbund. The second pair, which looks lighter than the jacket and is probably dark grey, has a flat front. Anthony Sinclair, who also made Sean Connery’s suits in the Bond films, likely tailored this suit as he made many clothes for John Drake actor Patrick McGoohan. 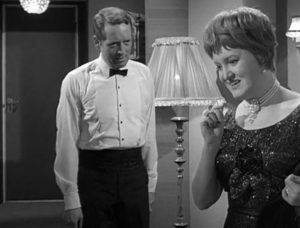 Drake wears proper black tie accessories with the suit. The dress shirt has a bib, spread collar and double cuffs in cotton marcella, and the collar and cuffs have edge stitching. The body of the shirt is a white-on-white stripe and the buttons are black to resemble studs. Drake’s bow tie is black silk but the cummerbund is a fancy patterned silk, and it is possibly in a colour other than black. The shoes are black plain-toe derbies. Early in the episode Drake wears a boutonniere in his lapel buttonhole.

Apart from Patrick McGoohan sharing the same tailor as Sean Connery, this episode has another connection with James Bond: Desmond Llewellyn, who played Q in 17 Bond films, appears in this episode.