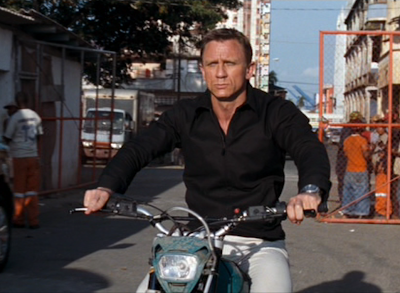 For his trip to Haiti in Quantum of Solace, James Bond wears a black pique-knit polo shirt by Tom Ford with a small rounded breast pocket and a two-button placket. The polo has a tight fit and very short sleeves to show of Daniel Craig’s muscles. The Polo is very similar to what Sunspel made for Daniel Craig in Casino Royale and confused many people as to the polo’s origin.

The trousers are off-white Levi’s 306 STA-PREST jeans, a line originally from the 1960s. But these are much more than just jeans, even beyond the unique colour. Levi’s intended for these jeans to be worn pressed with a crease down the leg for a less casual look, though Bond’s jeans are not creased. Little did Levi’s know in the 1960s that forty years later jeans would be acceptable for dressier occasions and be worn with dress shirts and jackets by the more fashion forward. The fabric is a twill weave with a strong diagonal rib in a cotton/polyester blend to prevent wrinkling. Like most jeans, these have a five-pocket design, including patch pockets in the back. Bond wears these jeans with a cross-hatched black leather belt with a silver buckle by Prada. 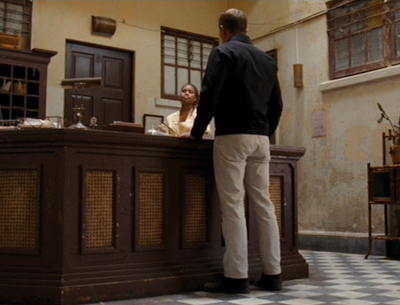 After a nasty fight that tears up Bond’s polo, he finds a black Adidas Y-3 jacket to wear over it. The jacket has a collar, set-in sleeves and a zip front. The fabric is most likely a cotton and polyester blend. It has two lower hand-pockets. Bond’s shoes are Church’s Ryder III Chukka Boots in brown suede with a Dainite® studded rubber sole.

Bond makes a bold move by wearing a black belt with brown shoes. He does this to match the belt with the jacket and polo shirt instead of his boots. Even though the jacket is not Bond’s the costume designer still planned the outfit to go together. But if Bond wanted to wear a black belt to match with the shirt and jacket, black boots would be have been a better choice. The brown boots go well with the off-white jeans and the black shirt also goes fairly well with the jeans, but the problem arises with tying the whole outfit together. Though brown and black can work together, the brown boots and black belt undoubtedly clash. Men’s clothing should never look “matchy-matchy” but we should not forget all about coordination. The clash gives the outfit a more thrown-together look, but not a well-dressed look. A brown belt with a blue shirt and blue jacket would have worked much better.