In the opening scene of A View to a Kill, Bond is a wearing an all white ski suit made by Bogner. The parka has a zip front, with the identifying Bogner “B” zip fastener. A fly that fastens with four large snap fasteners covers the zip. The jacket has four patch pockets with Velcro-secured flaps, and the top two flaps additionally are buckled down with straps. The jacket has shoulder straps, adjustable straps on the sleeves and a narrow belt that ties around the waist. The Bogner logo is embroidered on the left shoulder. The parka has a cotton lining in a red and grey check on a cream ground. The coat has a removable hood, trimmed with fur and tightens with a drawstring. The pants match the white parka. 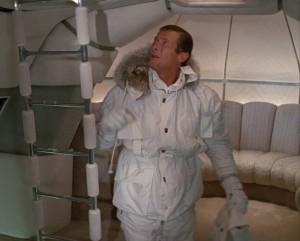 Underneath the parka Bond wears a half-zip jumper made of a thin, insulating synthetic. The zip fastener is the Bogner “B.” He also wears white bogner gloves, again with a “B” zip fastener. On his back he wears a white backpack. Everything he wears is white to camouflage himself in the snow. It helps when trying to avoid gunfire, though for the average skier it could make it much harder to be spotted in the event of an accident.