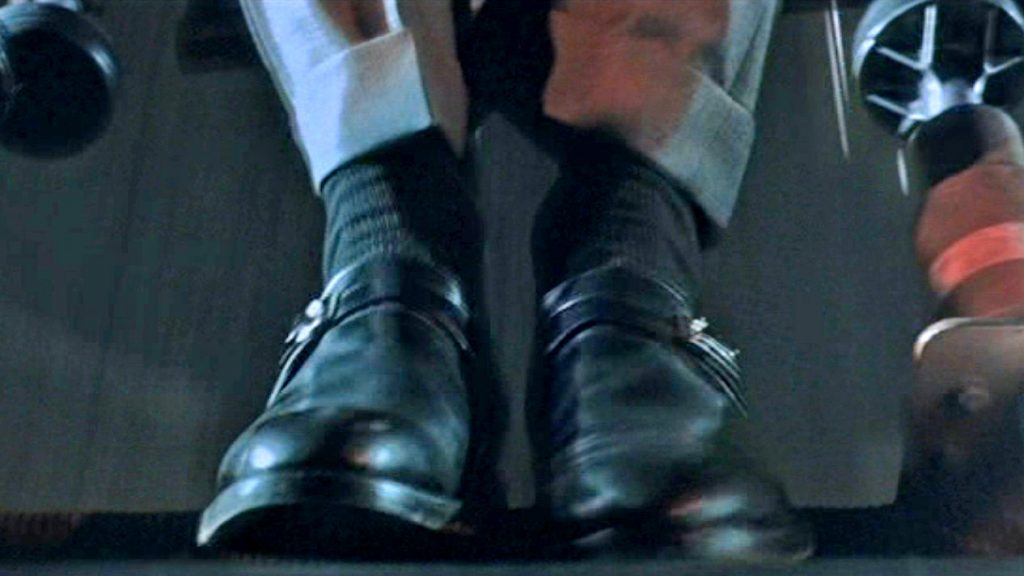 Boring, conformist, unfashionable, unstylish and not versatile. These are just a few things people often say about black shoes. But black shoes are a staple of James Bond’s wardrobe and are the only shoes he wears with city suits. City suits are worsted and flannel wools in grey, blue, black and certain browns. Though black shoes don’t get much love, there are many reasons to wear them. And these reasons are why James Bond continues to wear them.

Today, shoes in various shades of brown—particularly lighter browns and tan—are popular as they are seen as more versatile and more interesting. Brown, tan and burgundy are indeed more fun than black and can go with more things than black shoes can. Dark brown can especially go well with just about anything other than black. Brown shoes can take a patina, a variation in the colour that makes the shoes look elegantly aged. But black can do many things that brown cannot.

English tradition means that black shoes are to be worn with city suits, particularly when in London. Brown shoes are too sporty and too fun for business in London, where only black shoes are serious enough. There are a few occasions where for when only the grave look of black shoes will do. Funerals and typical job interviews are two of them. Black shoes, so long as they don’t clash, are an easy way to increase the formality of an outfit over brown shoes.

For a look of power, black shoes cannot be surpassed. When well-shined, black shoes present a man who is serious about what he does. Black shoes also keep us grounded—the complete opposite of tan shoes—and never distract from the face like lighter-coloured shoes can. So long as they don’t clash with the outfit, they never compete with the outfit or drawn attention to themselves.

Black shoes pair easily with any shade of grey, and when Bond wears a grey suit or grey odd trousers he’s almost always wearing black shoes. Black shoes also pair well with navy suits, whilst black and blue are difficult to pair in other combinations besides leather. The texture of leather differs enough for the wools, cottons and silks of the rest of the outfit, which is why it can complement a blue outfit rather than clashe with it. The darkest blue suits—such as deep navies and midnight blue—demand black shoes. Black shoes are the only thing that can keep such deeply coloured suits grounded. Lighter blue suits can take a variety of shoe colours, but unless it’s a casual linen suit, Bond wears all other blue suits with black shoes.

Black shoes can even work with tan suits and trousers if the rest of the outfit is coordinated with them. However, it isn’t easy to make this work, and browns shoes are far easier to pair with tan. Black shoes are part of tan uniforms of certain armed forces.

Black shoes lend themselves to cleaner, more formal designs due to the formality of the colour. Cap-toe oxfords and plain toe wholecuts, derbys, monks and chelsea boots are natural choices for black shoes. For a larger black shoe wardrobe, semi-brogue and full-brogue (wing-tip) oxfords are some shoes that Pierce Brosnan wears in his Bond films, though these busier styles are easier to wear in brown or burgundy. Black pebble-grain shoes and black slip-ons some of the less formal black shoes Bond has worn.

Though black shoes are difficult to dress down, James Bond often wears black slip-ons with his cool-toned casual outfits. Browns are typically easier to wear casually, but it doesn’t mean that black shoes can’t be worn casually too. Black suede or pebble grain can be good for casual shoes if one is wearing black casual trousers, though brown shoes are almost always superior in all other casual situations.