I was recently at Frank Foster selecting two new blue shirts and had a difficult time choosing the blues that I had in mind. Blue is one of the most popular and useful colours for shirts since it can be dressed up or dressed down and pairs well with most other colours. James Bond wears more shirts in blue than in any other colour for these and other reasons. Picking the right blues, however, is more complicated than it would seem at first, and I found it challenging to choose the ideal blues for my complexion because there are so many options.

The hue—the place on the colour spectrum—of any given blue is one of the most defining factors of the colour and an essential factor when coordinating different blues. Blue shirtings range from green-blues to violet-blues, but the green or violet hues may only come out when compared to a blue elsewhere on the spectrum. For classic light blue shirtings, the green side of the spectrum is ice blue and the violet side of the spectrum is periwinkle. Most people look fine in blues across the spectrum, but people with warm complexions tend to look better in green-blues while people with cool complexions may look better in violet-blues. Green-blues often look brighter or lighter while violet-blues may look softer or darker.

When choosing blue shirtings, it is important to look at them against your skin. Because shirts are worn up against your face, it is more important with shirts than with any other piece of clothing that they complement your complexion. Larger swatches can help more with determining colours than smaller swatches. It is crucial to look at shirtings outside as well because natural light will show their true colours. Compare swatches to shirts your favourite blue shirts to help compare colours.

The value—lightness or darkness—is what we first think of when looking at a certain colour. Lighter blue shirts are dressier and more traditional than darker blue shirts, which look more modern and can be more easily dressed down. Because men’s shirts are traditionally worn in light colours, what is considered dark blue for a shirt is lighter than a dark blue for a suit.

The colour names of semi-solid shirts can also be misleading because the shirts often appear lighter than the colour they are named with. A “navy” semi-solid or striped shirt is usually made of navy and white, thus it will look much lighter than navy because it has white mixed in. It is still called “navy” because that’s the shade of blue it is made with.

Men’s formal shirts are typically not found in fully saturated blues, and a strong saturation often looks unsophisticated or cheap in a shirt. Blues are often mixed with white in shirtings to give them a softer look.

Many blue shirtings are a mixture of blue and white. White mixed with blue gives a much different effect than a solid blue does. If the mixture is fine enough, the white and blue blend together to make a soft pastel. When the white and the blue appear more separated from each other, the blue looks stronger. In fine weaves where the blue and white are not separated, the shirting is labelled with the name of the blended blend and white colour. When the blue and white appear more separated, the shirt is usually labelled with the name of the shade of blue alone. 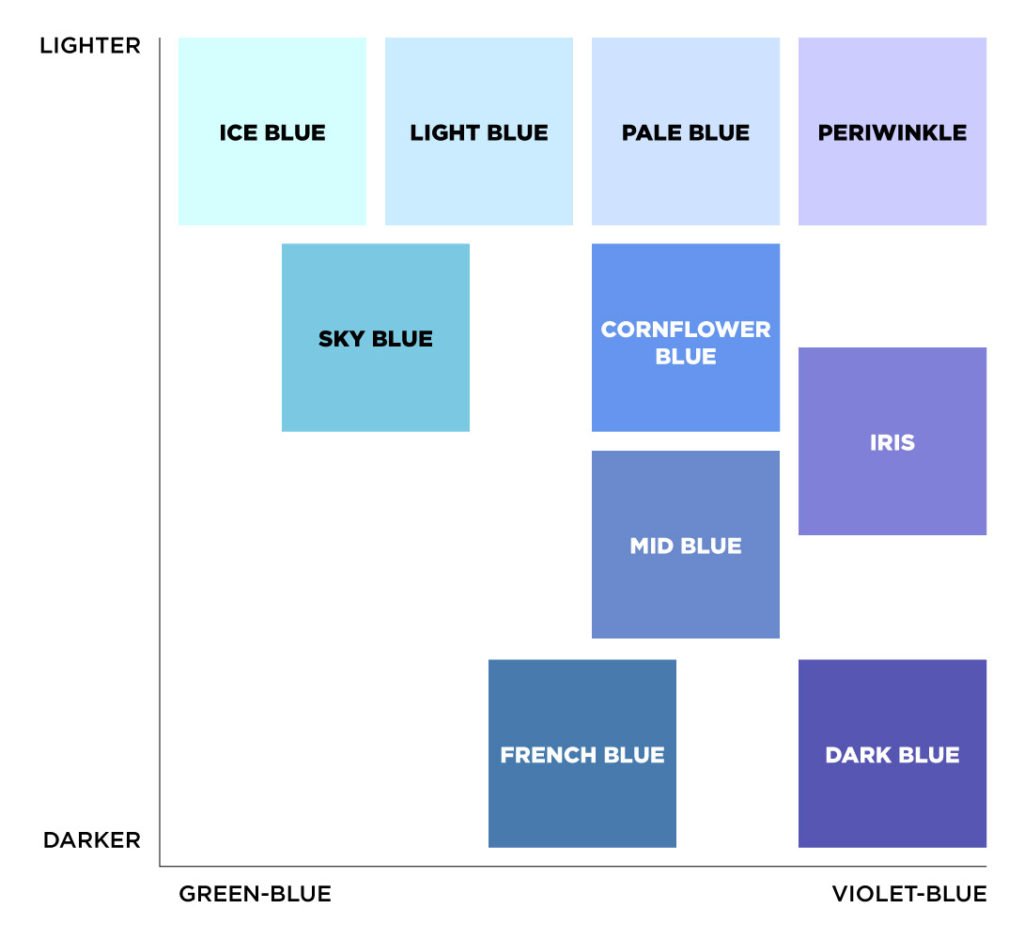 Cornflower Blue: A vivid medium-light blue like the colour of cornflower petals.

Dark Blue: A dark blue, usually with a violet cast to make it look deeper.

French Blue: A dark blue with a green cast, meant to evoke the colour of the Mediterranean Sea.

Ice Blue: A pale cyan (a colour halfway between green and blue), meant to evoke the cool colour of ice.

Iris: A medium blue with a violet cast.

Light Blue: May describe any light tint of blue, but light blues often have a slight green cast to give them a brighter colour. This colour is also the same as light sky blue and baby blue. This is the most common form of the lighter blue shirtings.

Mid Blue: A muted medium blue, which sometimes may have a green cast. In comparison to a true medium blue, mid blue shirtings are usually lighter and less saturated.

Pale Blue: A very light blue with low saturation. Pale blues tend to lean towards violet on the spectrum to get a softer look.

Sky Blue: A medium-light green-blue like the colour of the sky.

The above definitions relate to commonly used colours for shirts. Some shirt brands may apply these names to different colours or may use other names for these colours. Most shirt brands will offer only a few different shades of blue in a collection, and even bespoke shirtmakers may not have the exact shade of blue you have in mind.