With only one plain blue shirt from Frank Foster in my previous orders, I found myself desiring more plain blue shirts. Plain blue may be an ordinary colour for a shirt, but it is one of the most versatile colours and it looks good on most people. In a luxurious material with the perfect collar and a fun cuff design, a shirt can subtly be very special. Subtly special is the idea behind most of the shirts James Bond wears. 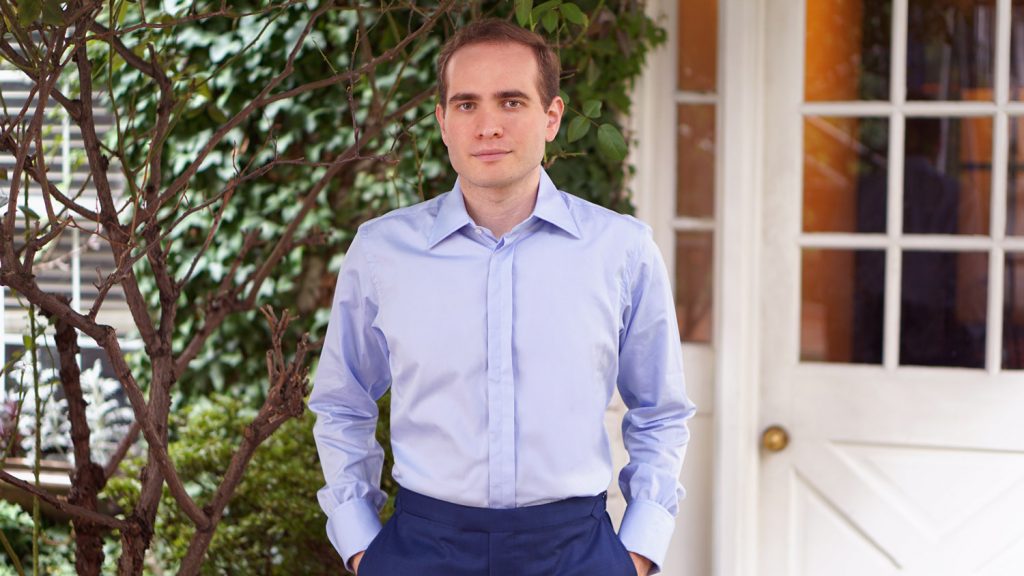 One of the most essential James Bond shirts is light blue cotton poplin. Roger Moore’s first shirt as James Bond in his first Bond film Live and Let Die is light blue cotton poplin. He wears this shirt throughout his adventures in New York City under a navy suit and navy double-breasted chesterfield coat, and since I live in New York City it’s about time I made this part of my wardrobe.

Choosing the right material for this shirt proved to be most difficult. Frank Foster have a vast collection of light blue shirtings in countless hues, various weaves and different levels of fineness, so it took a lot of searching and a return visit to find this perfect colour. This soft blue is exactly the pale periwinkle colour I was looking for. This shirt is slightly darker than the colour that Moore’s Live and Let Die shirt appears to be, but it is difficult to know the exact shade of Moore’s blue shirt because light colours are easily blown out on camera. 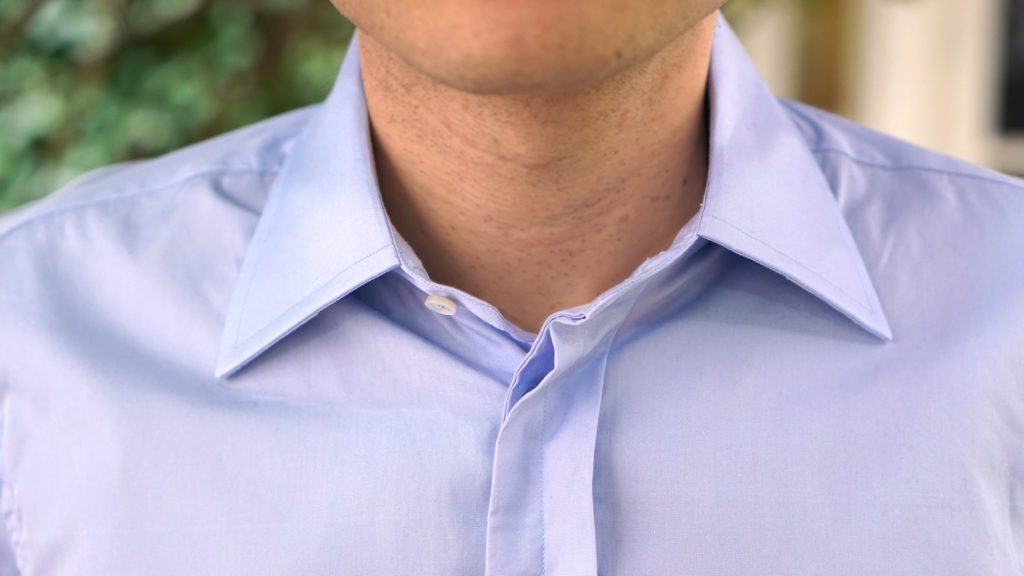 The fabric is woven with a white warp and a blue weft. Compared to a piece-died fabric where everything is light blue, weaving white with blue creates a softer blue but also makes for a richer colour. Unlike a blue end-on-end, where the warp ends alternate with blue and white against a white weft to create a cross-hatch effect, this shirting looks evenly solid without magnification. This is a proper poplin; it is a plain weave with twice as many warp yarns than weft yarns, giving the cloth subtle crosswise ribs. It is a fine poplin with a soft hand and a fair amount of sheen, but it also has some body. 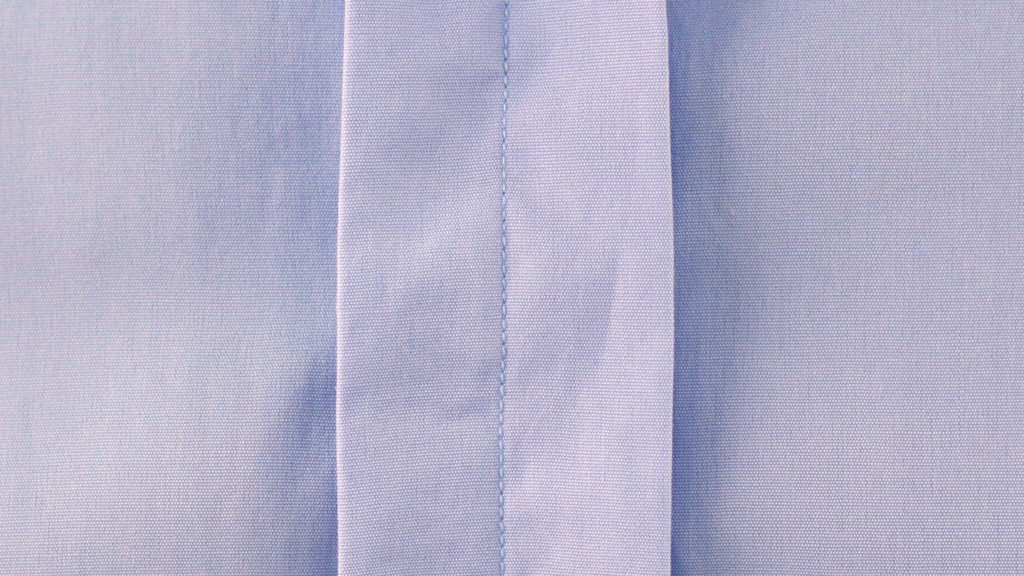 I asked Mary at Frank Foster to copy the unique fly front on Roger Moore’s shirts from Live and Let Die. The front has a folded placket with one line of stitching down the middle, giving the front a symmetrical appearance. Frank Foster’s typical fly front is stitched like an ordinary placket, with two lines of stitching framing the buttonholes. Without buttonholes down the placket, only one line of stitching is necessary to hold the placket in place. This kind of placket flares out more than an ordinarily stitched placket, so this style may not be to everyone’s tastes. But without buttons, this single line of stitching down the centre gives focus to the shirt without visible buttons anchoring the centre. I have only seen this type of placket done elsewhere on pleated dress shirts, where the placket matches the wide pleats.

The collar on this shirt is my usual, which is a classic unfused English spread collar that is a bit larger in scale than the average collar. It is touch wider than the collar that Frank Foster made for Roger Moore to wear in Live and Let Die but is otherwise very similar. It more closely resembles Roger Moore’s collar in his 1980s Bond films. 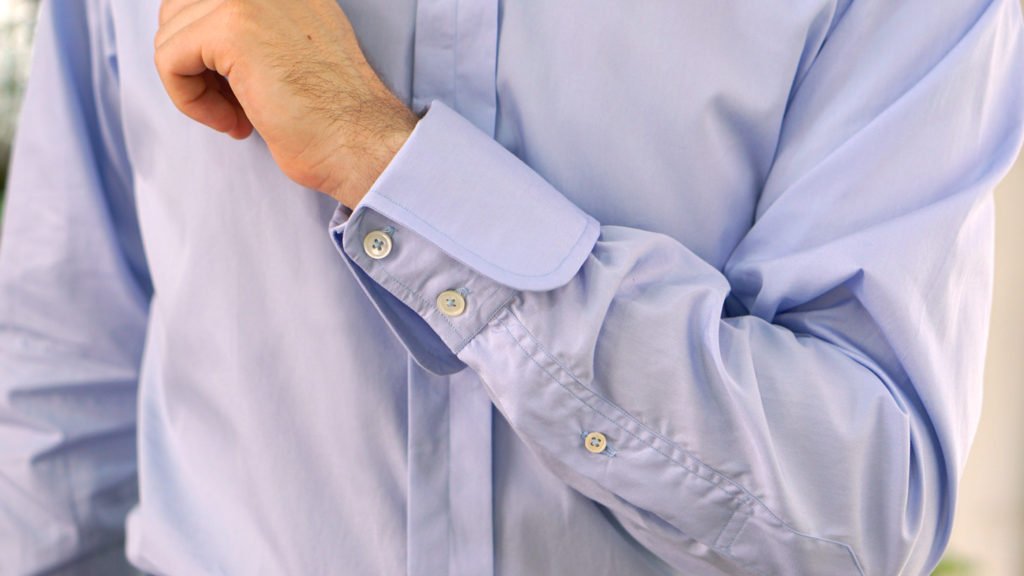 The cuffs on this shirt are two-button cocktail cuffs, but the design is the style that Roger Moore wears in The Man with the Golden Gun rather than Live and Let Die. This is the style that Frank Foster prefer to make today. Like the collar, the cuffs are unfused. The interfacing in the cuffs is lighter than in the collar but still has a lot of body.

The poplin shirt is paired with my blue sharkskin suit trousers from Mason & Sons. 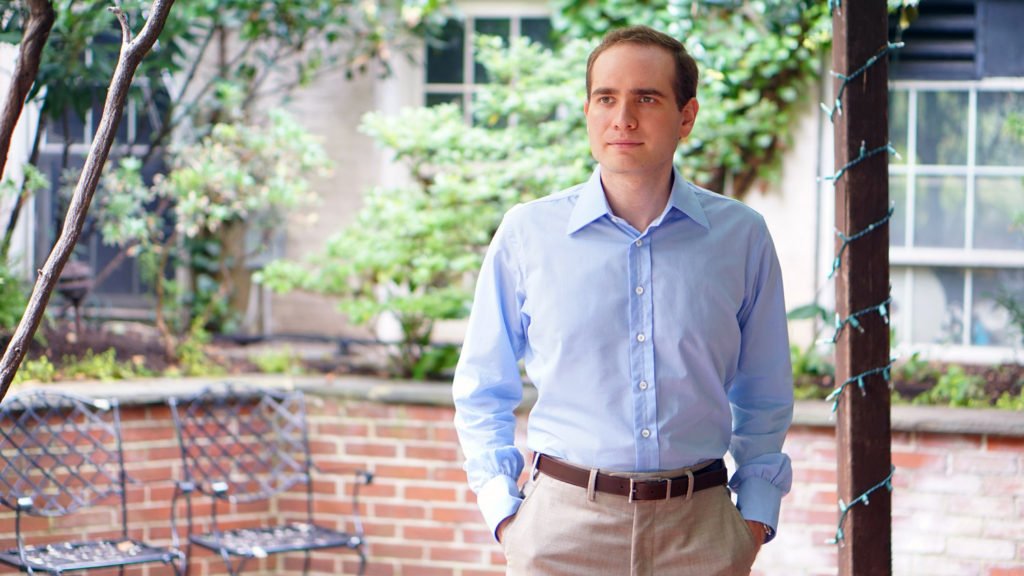 My second blue shirt is based on the shirt that Roger Moore wears in Moonraker with his navy blazer and cavalry twill trousers when he meets Drax at his California chateau. This shirt very similar to the shirt above, but it is made from cotton voile instead of poplin. Voile is similar to poplin in that it a fine cotton material woven in a plain weave, but because it is woven of high twist yarns it has a more open weave and is more breathable. This makes voile ideal for warm weather, and Roger Moore’s Bond usually—but not always—wears his voile shirt in warmer locales. 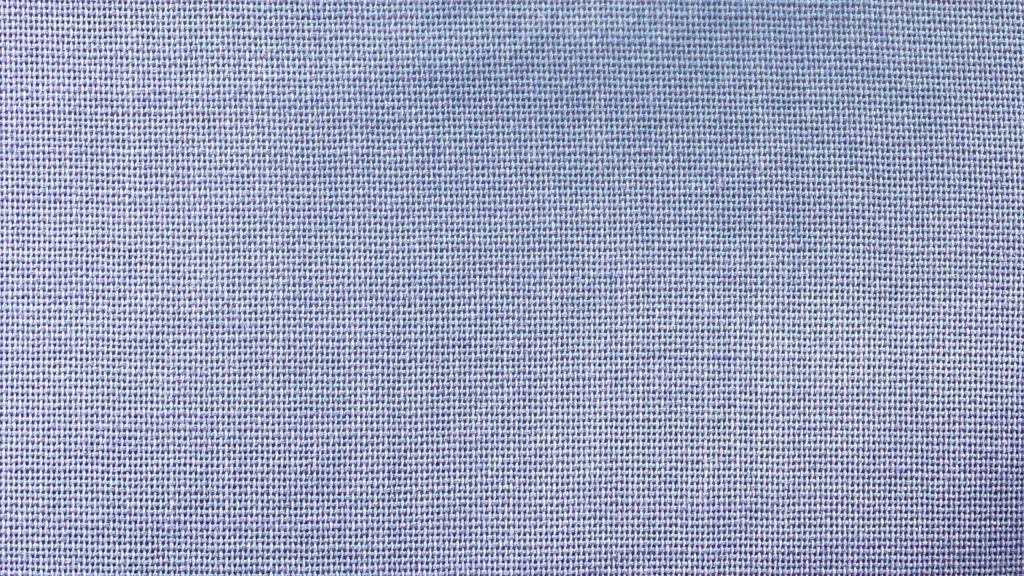 Voile is a semi-sheer fabric, which is due to its open weave. In blue, particularly in darker shades, it is less sheer than voile in white or cream.

The hue of this voile shirting is closer to a true blue than the pale periwinkle poplin above. Like the poplin, this shirting is woven with a white warp and a blue weft for a soft blue. The white yarns are more easily seen in the voile than in the poplin, but only from a very short distance. 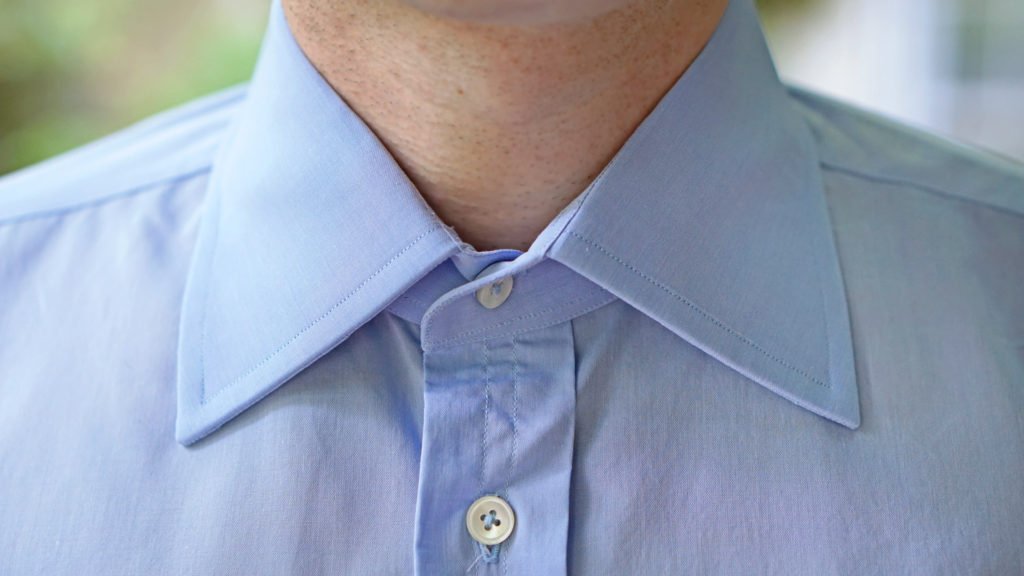 This shirt is made with the same unfused spread collar as the shirt above rather than the much narrower collar with very long points that Roger Moore wears in Moonraker. I prefer my regular collar because it best balances my face. 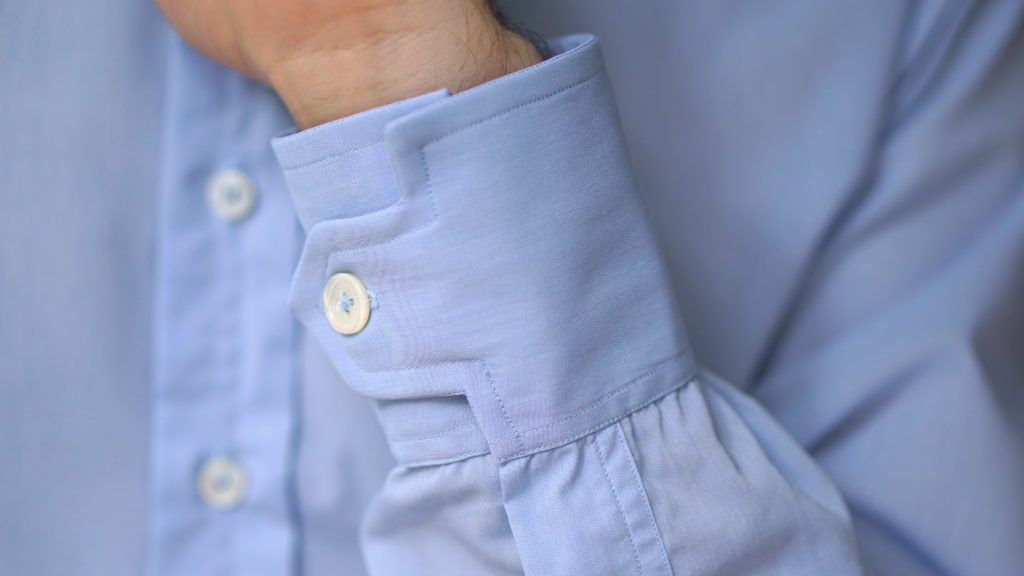 The cuffs with a tab extension are the same that Roger Moore wears throughout The Spy Who Love Me and Moonraker. Frank Foster calls this the “Lapidus cuff“, after fashion designer Ted Lapidus who invented this cuff. Mary made this cuff differently than she made the Lapidus cuff from my first order. This time it is more like that design that Roger Moore wore, with a wider tab that is stitched from the edge at the same distance as the rest of the cuff. This cuff has a shorter tab than the the tabs on Moore’s cuffs. Since I am a smaller man than Sir Roger, I have smaller wrists and need shorter tabs on my cuffs.

The voile shirt is paired with taupe tropical wool trousers from Peter Elliot and a reversible dark brown calf and suede belt from Ferragamo, who provided many of Roger Moore’s shoes and belts for the Bond films.