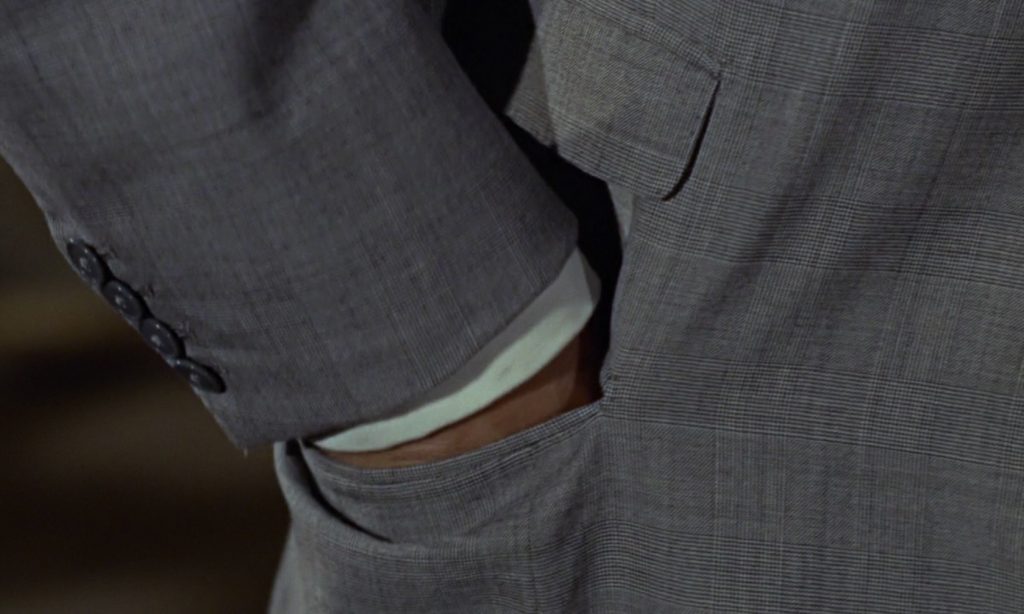 Alan Flusser writes in Dressing the Man that the ticket pocket was “introduced in the late 1850s for a railroad ticket and used at intervals ever since.”

Riccardo Villarosa and Guiliano Angeli have a more modern idea about the ticket pocket’s name that they write in The Elegant Man: “[It] is called a ticket pocket because it often holds bus tickets.” The ticket pocket is meant are for travelling tickets and not opera or theatre tickets. It is too informal to wear on suits that would be worn to the opera or the theatre. Other than travelling tickets, the pocket can be useful for any small item such coins, banknotes, receipts, papers, etc.

James Bond has ticket pockets on a number of his suits and sports coats. Until Pierce Brosnan became Bond in the 1990s, Bond’s suits with ticket pockets were almost all sportier suits. The majority of Bond’s tweeds have ticket pockets, like the tweed hacking jackets in Goldfinger, Thunderball and A View to a Kill, the “reversible” tweed jacket in Octopussy and the tweed suits in Moonraker and The World Is Not Enough. The blazers in On Her Majesty’s Secret Service (double-breasted) and The Spy Who Loved Me (single-breasted) also have ticket pockets. Apart from the tweed suits, many of Bond’s other sportier suits have ticket pockets, like the glen check suits in Goldfinger, On Her Majesty’s Secret Service, Diamonds Are Forever and GoldenEye, the brown houndstooth check suit in Goldfinger and the grey flannel suit in Diamonds Are Forever.

Starting in GoldenEye, many of James Bond’s worsted city suits have ticket pockets. Many of Pierce Brosnan’s worsted suits—three in GoldenEye, two in Tomorrow Never Dies, two in The World Is Not Enough and one in Die Another Day—have slanted pockets with a ticket pocket. Though this pocket style gives the Italian Brioni suits a decidedly more English look, it is really too sporty for business suits.