Pierce Brosnan wears a number of beautiful suits from Milanese tailor Gianni Campagna in The Thomas Crown Affair (1999). The suits in the film were reported to be made of Super 150s wool. Higher Super numbers indicate a finer fibre but not necessarily a higher quality cloth. Finer fibres make for a cloth that has a softer hand, but the resulting cloth is often less durable, is more prone to creasing and shining, and doesn’t usually tailor as well. Quality has more do to with the way the cloth is woven and finished. Whilst finer wools are often thought to be better, a Super 120s cloth from a reputable merchant is far superior to a cheap Super 150s cloth. The Super number is unrelated to the weight of the cloth. 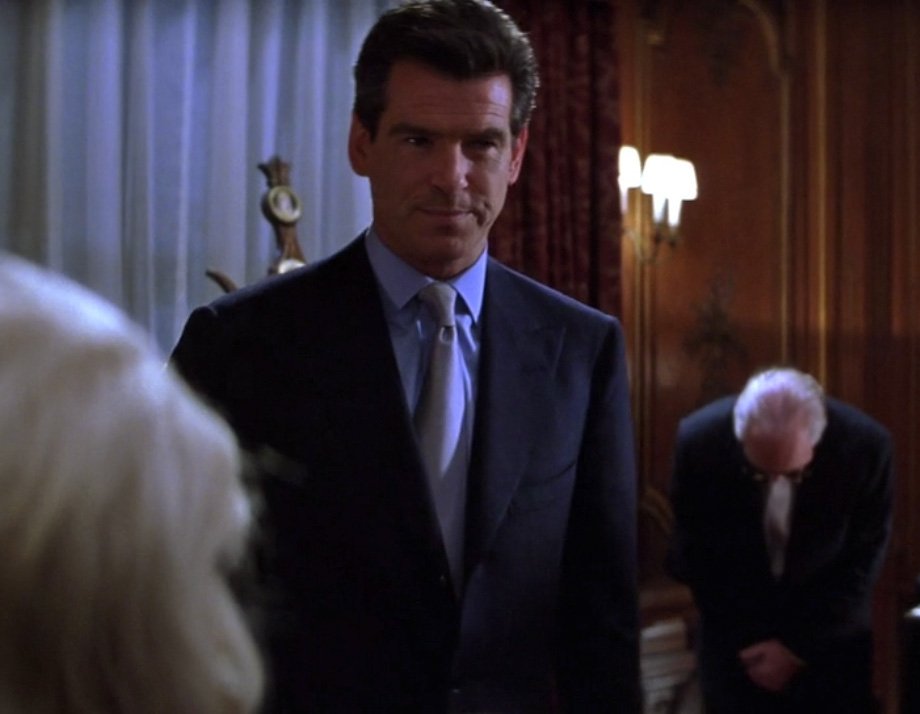 One of Pierce Brosnan’s many suits in The Thomas Crown Affair is a navy suit in a large herringbone weave, but since the cloth is a fine Super 150s the stripe effect from the herringbone weave is very subtle and can only be seen in certain lighting. The suit jacket buttons three, and though Brosnan only fastens the middle button, the lapels roll at the top button. It is cut with a clean chest and has straight shoulders with roped sleeve heads. Peaked lapels add an air of formality to this lounge suit, whilst also giving it a bit of a 1940’s Cary Grant look. Though peaked lapels are currently very trendy, the current examples are typically very narrow and on high button two jackets. This jacket has the most classic and elegant of proportions. It looks great on Pierce Brosnan, and it would look just as great now as it did in 1999. This jacket probably has double vents like the other jackets in the film do, though we don’t get a good look at the rear of this suit. Like the other suits in the film, the full-cut trousers most likely have reverse pleats. Brosnan wears the trousers with a belt. 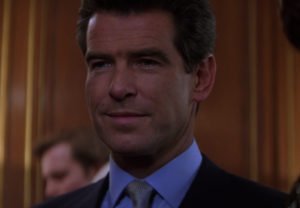 Brosnan’s iris blue shirt from Turnbull & Asser has a spread collar and double cuffs. The silver tie is probably also from Turnbull & Asser. Brosnan ties the tie in a four-in-hand knot with a dimple. Like the suit, the tie is in a herringbone weave. It’s not the same weave as the tie he wears in The World is Not Enough, which is a pointed twill weave that looks like a chevron pattern rather than a herringbone. To not clash with the texture of the suit, the tie’s herringbone is larger than the suit’s herringbone. Also, the herringbone in the suit is subtle enough that it nothing will really clash with it.