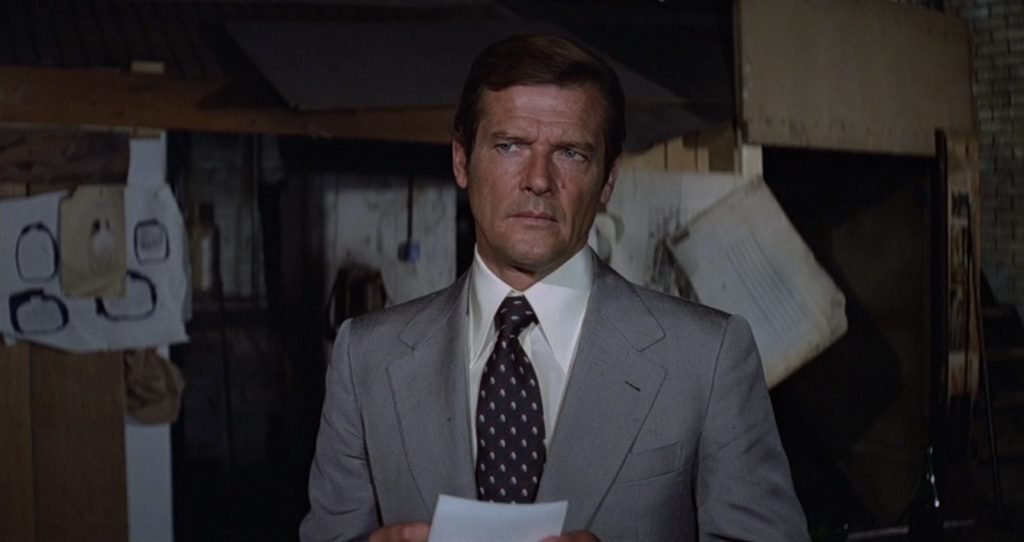 Though silk is the standard material for a neck tie, James Bond shows plenty of love to silk beyond ties. Silk is often considered one of the world’s most luxurious fibres, due to its sheen and soft hand and because of its history as a rare and expensive fibre in the West. Silk now is commonplace in the West, but its standard use in menswear comes in the form of small pieces of neckwear or for the facings on a dinner jacket. There’s nothing special about a silk tie, especially when new silk ties can be had cheaply.

In large garments such as suits, jackets, trousers, dinner jackets, shirts, gowns, knitwear and socks, silk is still a special material. Because of its delicacy, difficulty in laundering, warm-wearing properties and expense, the average person does not wear silk garments on a regular basis, let alone any. When James Bond wears silk, it sets him apart as an unusual and special person.

The silk dupioni suit was a favourite of Roger Moore’s Bond in the 1970s, but it first showed up on Sean Connery in From Russia with Love tailored by Anthony Sinclair. Silk dupioni is known for its slubs, knots and lumps that give the silk an imperfect look. These “imperfections” are signifiers of this luxurious fabric, and they showed Connery’s Bond to be a man of luxurious taste.

The silk dupioni suit did not become a mainstay of Bond’s wardrobe until Roger Moore wore it again in the form of a dark grey double-breasted suit from Cyril Castle in Live and Let Die, and silk suits would continue to appear in Moore’s Bond’s wardrobe in each of his 1970s Bond films through Moonraker in grey and brown.

The silk suit performs best in moderately warm weather. It looks out of place when the weather is cold, but when the weather is hot silk acts as an insulator and wears very warm. Silk is also a very rigid material and does not have much natural give, thus it can feel stiff. It does not serve Bond well when he needs to be running and shooting in his suits.

Silk most recently appeared in a suit in Spectre, where Daniel Craig wears two Tom Ford suits of a 70% wool, 18% silk and 12% mohair blend. These are the herringbone track stripe suit and the damier check suit, both worn in London scenes. This blend gives what is mostly a wool suit some additional sheen for a more luxurious look with the better performance of wool and mohair.

Silk sports coats are more common in the real world than silk suits are, but Bond wears fewer silk jackets than he does full suits. A few of Bond’s sports coats are silk blends rather than 100% silk. Roger Moore started off his Bond run with two silk sports coats made by Cyril Castle. In Live and Let Die he wears a tan basketweave sports coat that is likely a blend of linen and silk. Silk and linen is a popular blend because silk mitigates some of linen’s wrinkling while also keeping its appropriate warm weather look. In The Man with the Golden Gun, Bond wears a checked sports coat that is likely a blend of wool and silk. In this garment, the silk adds some shine to the wool, bringing it to life in sunny Southeast Asia.

In Spectre, Daniel Craig brings back the silk-blend jacket with a 51% wool, 41% linen and 8% silk-blend jacket from Brunello Cucinelli. The small amount of silk is to provide a bit of crispness and texture, though it would not immediately be noticeable.

James Bond occasionally chooses silk for his warm-weather off-white dinner jackets, and the luxury of silk is never inappropriate in a dinner jacket. Though silk does not perform best in hot weather, it looks best in warmer weather. While Sean Connery wears his off-white dinner jackets in wool, Roger Moore wears his first in silk dupioni in The Man with the Golden Gun. He wears this Cyril Castle dinner jacket in Thailand, a country known for its silk, so it’s undoubtedly a fitting place to wear this garment. Mother-of-pearl buttons complement the shiny silk of the jacket.

The off-white silk dinner jacket returns on Roger Moore in A View to a Kill, in an example made by Douglas Hayward. He wears this one in the French countryside in the summertime, where it is usually cooler than Thailand but looks good when the sun doesn’t set until near 10 pm. He’s likely more comfortable in silk here than he is in The Man with the Golden Gun. Because this dinner jacket has horn buttons and notched lapels, it could double as an sports jacket and pair nicely with tan linen trousers for the daytime.

After 30 years of James Bond not wearing an off-white dinner jacket, it returns on Daniel Craig in Spectre. This jacket by Tom Ford is a faille blend of 56% silk and 44% viscose. Blending the silk with viscose makes this a more practical silk jacket in warm weather because it is more breathable. This jacket has the addition of grosgrain silk facings on the lapels and buttons, following the current trend. Off-white dinner jackets traditionally do not take silk lapel facings, but it is especially a bad idea when the dinner jacket has a silk body. Silk lapel facings visually compete with the silk body.

Silk shirts and dress shirts are also some of Bond’s favourite garments. Silk shirts are not the most practical garment, but Bond takes pleasure in the way he dresses despite what serves his active lifestyle best. This use of silk for Bond’s shirtings starts with Ian Fleming. In Casino Royale, Fleming writes about Bond, “He looked carefully round the room to see if anything had been forgotten and slipped his single-breasted dinner-jacket coat over his heavy silk evening shirt.” In Moonraker, Bond wears “a heavy white silk shirt” with his navy serge suit. Because Fleming’s Bond revels in wearing the most luxurious materials against his skin, silk shirts are a favourite of his.

Sean Connery wears a Turnbull & Asser silk shirt with a flannel chalk stripe suit in From Russia with Love. It is his only shirt in the film that is not a pale blue Sea Island cotton, and it stands out through its dull sheen and unique ecru colour, the colour of natural silk.

Moore also wears silk shirts beyond black tie. One of the most memorable of his silk shirts is a blue and ecru striped shirt from Frank Foster in The Spy Who Loved Me. In The Man with the Golden Gun, Moore even wears a casual shirt of silk Crêpe de Chine. It is breathable in Thailand’s humidity, but it has a double-layer front to make the front opaque. Silk works especially well for casual shirts because it drapes well. Moore shows that silk can work for shirts of all formalities, from black tie to sportswear.

Silk isn’t just for show. James Bond wears silk dressing gowns in private, where only he and his female friends can enjoy them. Wearing a silk dressing gown is a sure way to impress a guest for the night. Sean Connery wears one in black and white nailhead in Goldfinger and another in navy silk in Thunderball.

Roger Moore is introduced as James Bond in a yellow dressing gown in Live and Let Die, and despite his love for silk his first garment in the role is cotton on the outside. However, it is luxuriously lined in silk. While a silk lining in a suit doesn’t do much but unpleasantly warm up the person inside, a silk lining in a dressing gown is felt against the skin. He’s keeping his luxury to himself.

Though silk may be the standard material for neckwear, it still needs a mention. Along with the commonplace repp and satin-weave ties, James Bond wears ties of textured grenadine and knitted silk, elegant fancy ribbed silk, shiny and slubby shantung silk, complex jaquard-weave silk patterns and creative silk prints. His quintessential black satin or grosgrain bow tie also needs a mention. James Bond appreciates the fanciest and most unusual of silk ties, rarely wearing something ordinary.