Skyfall opens with Bond wearing a black and white pick-and-pick suit from Tom Ford. Also known as sharkskin, this semi-solid pattern woven in an even twill weave looks like tiny steps going up the suit. We’ve seen the pick-and-pick suit on Bond before, in From Russia with Love and in The World is Not Enough. As opposed to a solid medium grey, which can look very flat, the pick-and-pick is far more interesting. This is one of four excellent cloths that costume designer Jany Temime chose the suits in Skyfall. The opening sequence is full of action and a suit is quite impractical for the scene. We don’t know why Bond is wearing a suit, for any other reason than being James Bond.

The jacket has a very close fit with a length that comes short of covering his behind, a very fashionable look for the past few years. The shoulders are straight but narrow. Bond keeps the jacket open since the tight fit makes the action sequences difficult, but it looks better open instead of binding when closed. Some jackets were made with longer sleeves for when Bond is on a motorcycle, so when his arms are extended it doesn’t look like his sleeves ride up. It buttons three down the front and matches with three buttons on the cuffs, and Bond leaves the last button open. The flapped pockets are on a shallow slant and the back of the jacket has a single vent. The trousers have a flat front with side adjusters, though it looks like they tend to slip down. They are cut with a narrow leg and a low rise, and the bottoms have turn ups. The hem is very short, but because the trousers are narrow and he’s wearing a boot they still break.

Bond wears a white Tom Ford shirt with a tab collar, placket and double cuffs. The Tom Ford tie has a complex black and silver check pattern that resembles a grenadine weave. The narrow tie is tied in a four-in-hand knot, which fits very nicely in the tab collar. Bond wears a folded white handkerchief in his breast pocket. 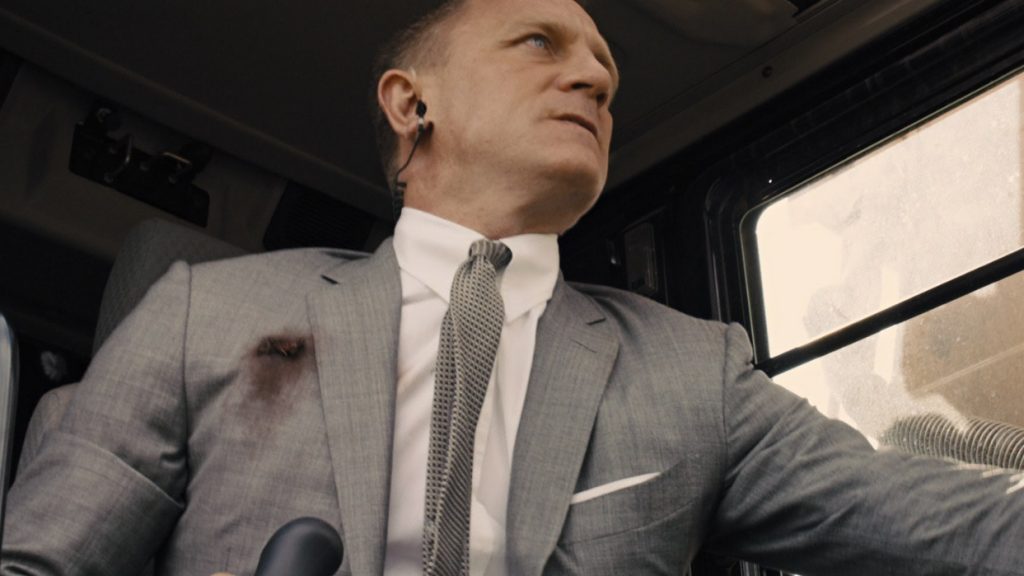 Bond’s boots are the Crockett & Jones Tetbury model, a black calf, two-eyelet chukka boot with a Dainite sole. Chukka boots, even in black, are too informal to wear with a suit and would be better worn with a sports coat or a casual ensemble. But Bond has always been one to wear casual footwear with his worsted suits, as Fleming prescribed moccasins for Bond in his novels. Chukka boots have a similar level of formality to moccasin-style slip-ons, though both are equally incongruous with a worsted suit.

In the scene pictured above, Bond does what Bond does and adjusts his cuff after getting shook up. But it looks like other parts of his outfit could use a bit more adjustment. 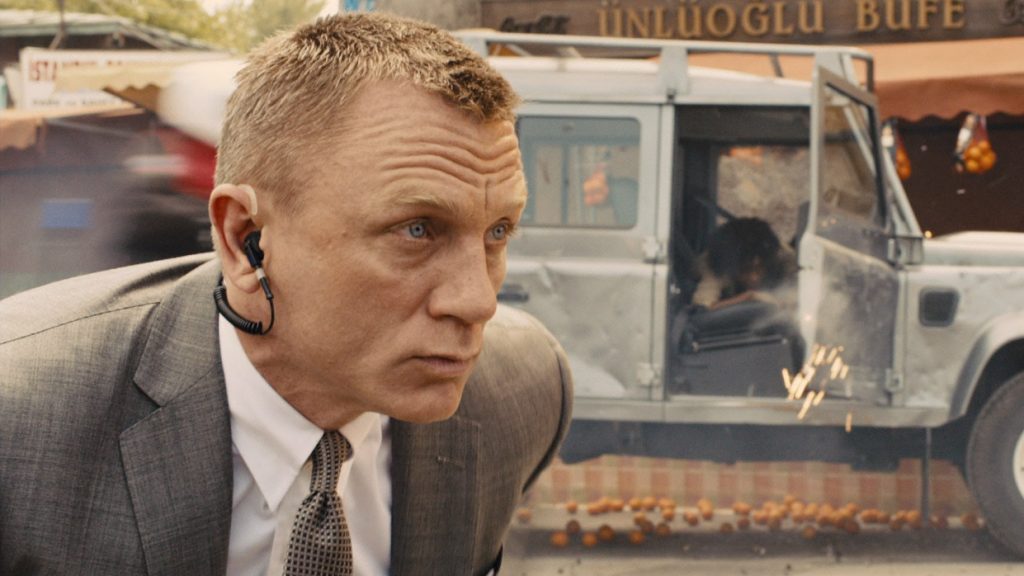