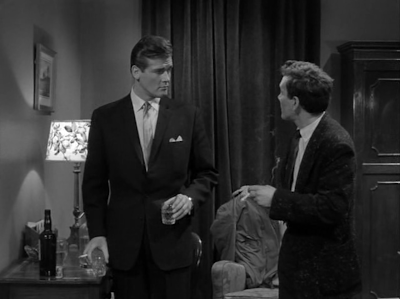 For this blog to have a continued life after I run out of clothes from the Bond series, I’ll need to find some other material. If Roger Moore was chosen for Bond instead of Connery in the 1960s, here’s how we might have seen Bond dressed. Roger Moore had the same tailor in the 1960s for his television series The Saint as he did in his first two 1970s Bond films: Cyril Castle of Conduit Street in London. Yes, that’s the same street that Connery’s tailor Anthony Sinclair had his premises, and their styles had a few similarities. They both cut suits with natural shoulders and full chests, though Castle uses more waist suppression. But whilst Sean Connery wore button two suits, all of Roger Moore’s suits as Simon Templar had the more traditional button three front. The button stance is fairly low, corresponding to Moore’s low waist, and only the middle button is fastened. The lapels are very narrow, narrower than Connery’s ever were. 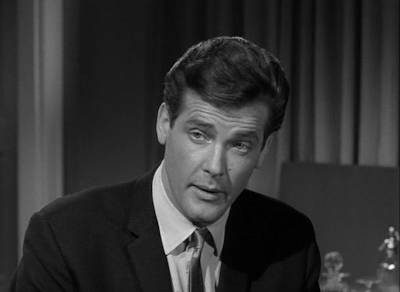 The example here is from the first episode of Series 2 of The Saint, titled “The Fellow Traveller”, which aired September 1963. The fabric has a narrow-spaced grey chalkstripe, with about three stripes to the inch, and Moore had a few other similarly striped suits throughout The Saint. Black-and-white television means that it’s impossible to know the colour, but it’s either navy or charcoal. This suit has jetted pockets, three-button cuffs and no vent. The trousers have a darted front with frogmouth pockets. They are worn with a belt and have narrow tapered legs with plain hems. 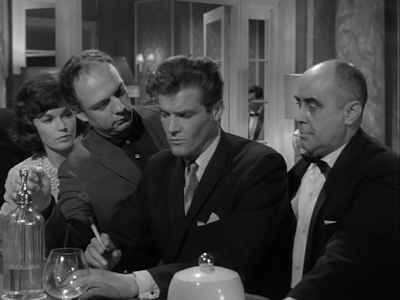 The shirt has a spread collar and double cuffs. The colour is impossible to know for sure on black-and-white film, but it’s not bright enough to be white. Though Roger Moore usually wore cream shirts in the colour series of The Saint, he was often photographed wearing pale blue shirts at this time, so the shirt is likely pale blue. Templar’s narrow satin tie is tied with a four-in-hand knot, and he can be seen in grey and scarlet red satin ties in photographs, making those strong possibilities for its colour. Templar also wears a pocket handkerchief, folded with two points sticking out. This blog will cover more suits worn in The Saint in the future. 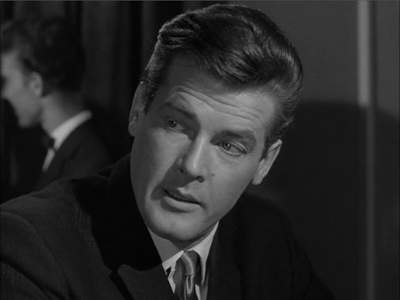