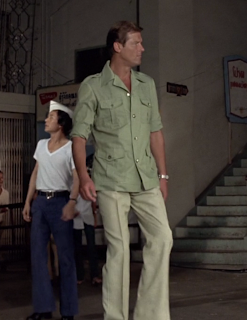 Roger Moore is well known for his casual safari clothing. I’ll never understand why some people insist on comparing these clothes to leisure suits when they are rooted in traditional safari clothes. Moore’s sage green cotton and linen blend safari camp shirt in The Man with the Golden Gun is appropriate for the hot weather in Thailand. It has a four-button front with a camp collar, a belted back and long side vents. It has traditional safari jacket features such as epaulette straps and box-pleat patch pockets with flaps. The buttons are pearlescent green. Moore wears the sleeves rolled up to just below the elbow. This piece was made by Hong Kong tailor Jimmy Chen, per an auction listing at Prop Store. 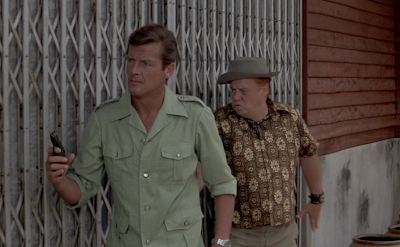 The beige trousers have a flat front with a slightly flared leg. The material may be tropical wool, linen, silk, or some combination of the three. Bond’s ribbed socks match the trousers. His shoes are brown low-vamp, tassel slip-ons. 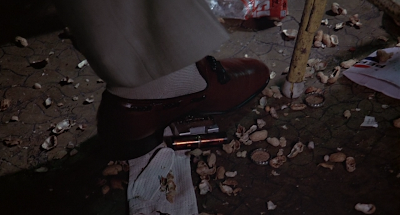