The royal oxford shirt should be more popular than it is. Though Bond has primarily worn poplin shirts throughout the series, Pierce Brosnan wears royal oxford shirts from Turnbull & Asser in Tomorrow Never Dies and The World Is Not Enough. All oxford cloths are basket weaves, from the finer pinpoint to the heavier standard oxford cloth, but the royal oxford is a more elaborate weave than the others and has a diagonal effect along with the basket weave look. Whilst royal oxford is the dressiest of the oxford cloths, it can be effectively made into both dressier and sportier shirts. Pierce Brosnan usually wears his with double cuffs, but in The World Is Not Enough he wears a royal oxford shirt with button-cuffs and an open collar with his herringbone linen suit. Royal oxford is just below poplin in formality and can be worn for the same purposes, whilst twills and other oxfords are all progressively lower in formality depending on the size of the texture. Unlike poplin, royal oxford irons very easily and doesn’t crease so readily. The floated yarns in the weave mean that it wrinkles less, but they also make royal oxford a softer cloth. If you’re used to non-iron shirts but want something more luxurious, a regular royal oxford shirt may be the best shirt to get. Royal oxford is also a heavier cloth than poplin, but the weave is open so it breathes very well. It is one of the most versatile shirtings whilst also being one of the most practical. 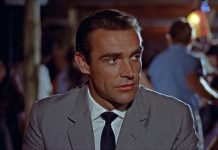