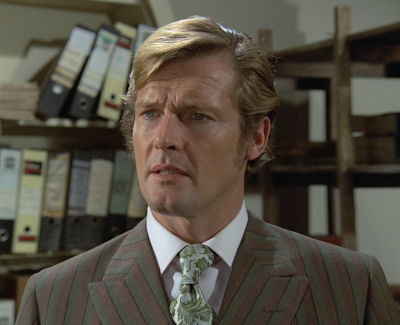 In the last of Roger Moore’s many television programmes, The Persuaders!, Moore took an extra role in designing the wardrobe of his character Lord Brett Sinclair. Moore was, at the time, the director of cloth merchant Pearson + Foster, which made suitings for both him and Tony Curtis in The Persuaders!. As a result, Moore wore some of the most unique and interesting fabrics of his career at this time. These bold fabrics were quite appropriate for an English lord and playboy, though too over-the-top for James Bond. Moore’s tailor from The Saint, Cyril Castle, still tailored the clothing. The example here is a double-breasted blazer in a bold, original pattern of wide maroon and green stripes with dark green chalk stripes to left of each wide green stripe, except with the pattern reversed on the outer part of the sleeves. The fabric is influenced by striped boating blazers, which are usually single-breasted with more contrast in the stripes. The images here are from the second episode, “The Gold Napoleon,” though Moore wore this blazer many times throughout the series in the South of France. 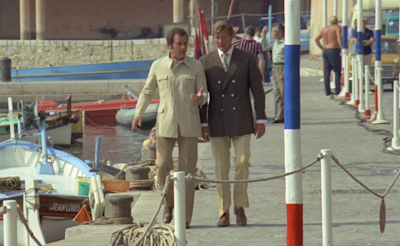 The blazer in the traditional button two, show three configuration has crested high-polish brass buttons. The wrap (front overlap) is narrower than the typical double-breasted jacket, and the top vestigial buttons are also placed in closer than what is typical. It is cut with soft shoulders, a clean chest, a nipped waist and a long, flared skirt with deep double vents. The blazer has single-button gauntlet cuffs (with a rounded turnback) and slanted pockets. 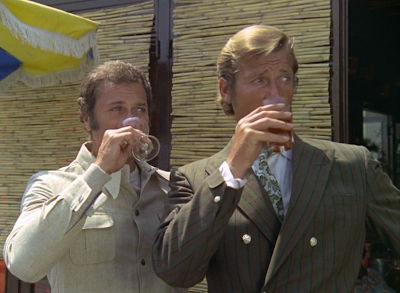 In “The Gold Napoleon,” Moore wears the blazer with golden beige wool trousers with plain bottoms and frogmouth pockets. The shirt by Frank Foster is made of a pale lavender poplin with a spread collar and button-down cocktail cuffs, which will be discussed in more detail at a later date. The tie is green leaves on a silver ground, tied in a four-in-hand knot. Moore match his trousers with beige socks and wears light brown slip-ons. 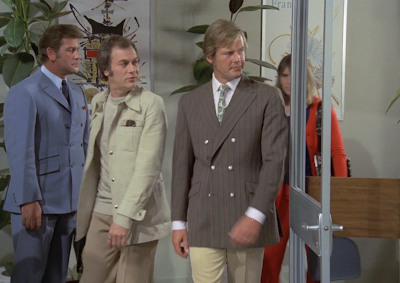