My 400th post features yet another one the many blousons that Roger Moore wore in his 1980’s James Bond films. The navy zip-front blouson in Octopussy has a shirt-type collar and shirt-type button cuffs. The front has a welt pocket on each side of the chest and patch pockets below with buttoned flaps. The back of the jacket is made with a yoke and two pieces, which gather at the waistband at the bottom. It looks like there are two extra pieces to the back on either side of the centre, but those are probably pleats that have been sewn shut down the back from the yoke to the waistband.

The flat front navy trousers have on-seam side pockets and at least one welt pocket on the back, on the right. Though both the blouson and trousers are navy, they don’t perfectly match. The trousers are most likely cotton drill, but the blouson could also be the same. 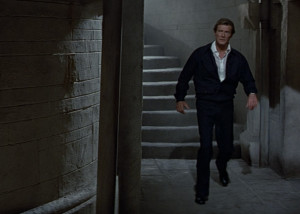 The lightweight white shirt is made by Frank Foster in the same style as the formal shirts in the film, and it has a spread collar, button cuffs and a front placket. Moore wears his usual black slip-on shoes, which are a very odd choice for the assault on Kamal Khan’s palace. The stuntman wears lace-up shoes, which Moore should have been wearing too.

The combination of white shirt and navy trousers is a classic combination that James Bond wears for casual use in Ian Fleming’s novels:

“He dried himself and dressed in a white shirt and dark blue slacks. He hoped that she would be dressed as simply and he was pleased when, without knocking, she appeared in the doorway wearing a blue linen shirt which had faded to the colour of her eyes and a dark red skirt in pleated cotton.” (Casino Royale, Chapter 24)