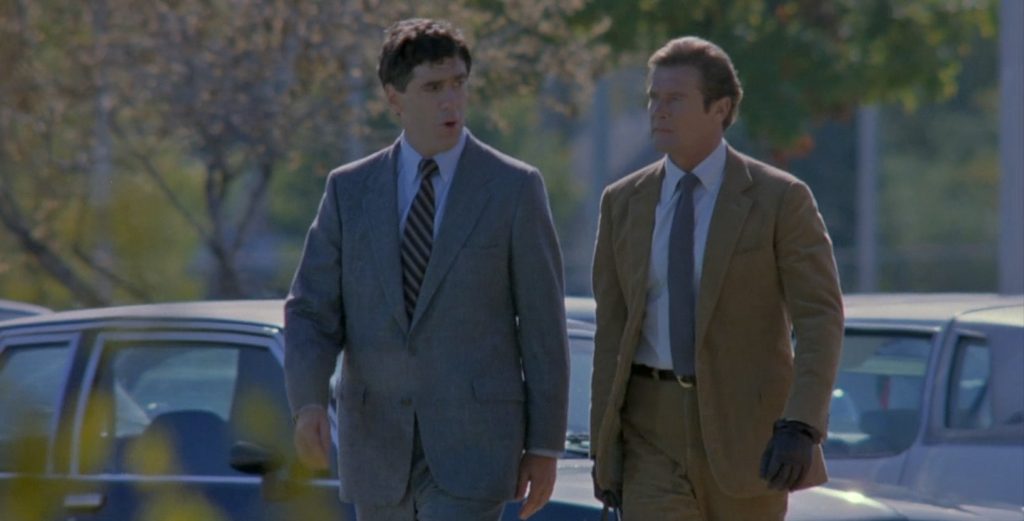 In the 1984 film The Naked Face, Roger Moore plays psychiatrist Judd Stevens who dresses in seasonal autumn clothing in the Anglo-American tradition. I previously wrote about Moore’s blue and beige barleycorn tweed jacket in The Naked Face, and most of the clothes in the film follow in a similar vein. Of all the tailored clothing in the film, only a light brown needlecord suit appears to be made by Moore’s regular tailor at the time, Douglas Hayward. Hayward made Moore’s beautiful tailored clothing for For Your Eyes Only, Octopussy and A View to a Kill. This suit is more casual than what Hayward made for the Bond films, and, though the cut is the same as what Moore wore as Bond at the time, it’s probably not a suit Bond would wear. Needlecord, also known as pinwale, is a fine wale cotton corduroy that is perfect for autumn in Chicago, where the film takes place. 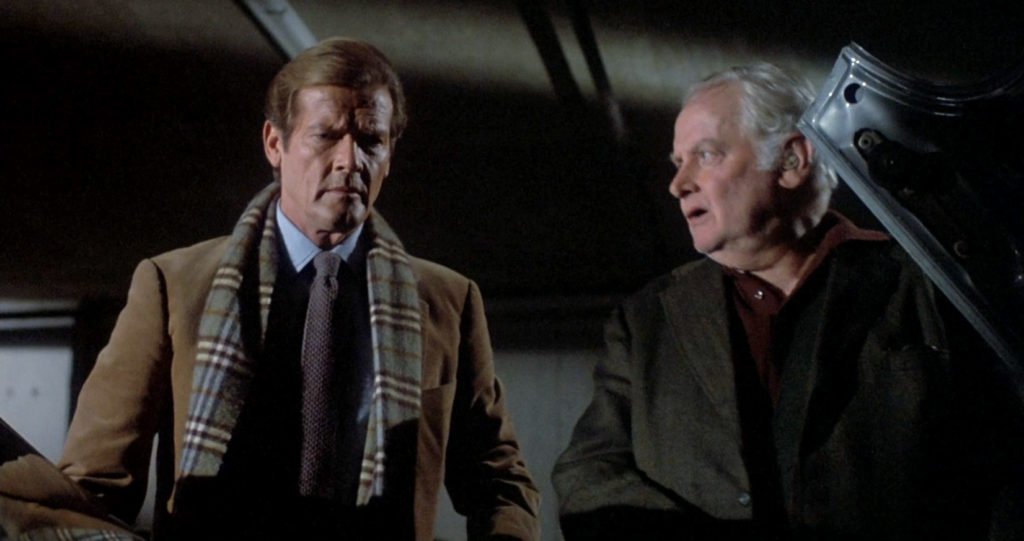 Like Roger Moore’s Douglas Hayward suits in his last three James Bond films, this suit jacket is cut with a clean chest and natural shoulders with gently roped sleeve heads. The button-two jacket also has the same low button stance and is identically detailed to most of Moore’s Bond suit jackets with flapped pockets, three buttons on the cuffs and double vents. The suit trousers are also like Moore’s trousers in his Bond films at the time: they have a straight leg and frogmouth pockets and are worn with a belt. Apart from the jacket’s low button stance, the suit looks timeless. 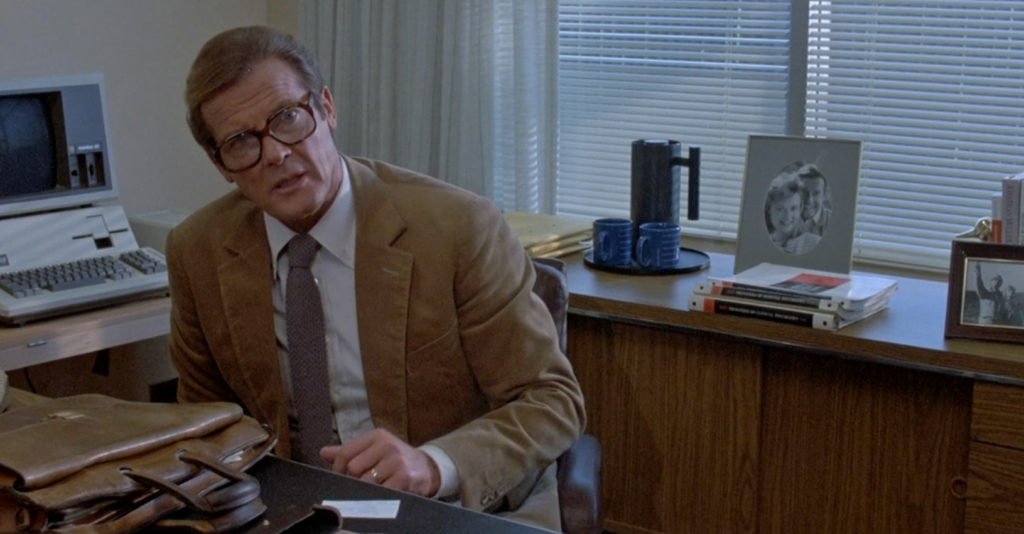 All of Moore’s shirts in The Naked Face are made by his regular shirtmaker Frank Foster, who made shirts for Moore in all of his Bond films. Moore wears this suit with two different shirts: a blue and white hairline stripe shirt with a spread collar—which is very similar to the shirt he wears with his navy suit in Octopussy—and an ecru shirt with a button-down spread collar. The button-down collar is much wider than the typical American button-down collar, but it still has a gentle roll. This is possibly what Roger Moore’s button-down collars in A View to a Kill would look like if worn buttoned with a tie. Both shirts have a placket with Foster’s identifying stitching close to the centre and extra-rounded single-button cuffs. Though the buttons aren’t clearly seen on these two shirts’ cuffs, another blue and white hairline stripe shirt in the film has a large cuff button like on Foster’s “Lapidus” tab cuffs. It’s possible that these two shirts also have the same large button on the cuffs.

With this suit Moore wears a grey-purple knitted wool tie with flat ends. Wool ties go especially nice with corduroy since they complement the rustic, autumnal look, and they have more contrast with corduroy than they do with the other traditional pairings like flannel and tweed. Knitted wool ties are slightly less formal than knitted silk ties, which makes them a great match for such a casual suit like corduroy. The tie’s colour, grey with a hint of purple, is rather dull compared to the rest of the outfit and slightly washes out Moore’s warm complexion. Moore ties it in a four-in-hand knot, and the knot ends up quite wide due to the tie’s bulk.

Moore’s slip-on shoes and belt are dark brown, and the belt’s brass buckle goes well with the light brown colour of the suit. Moore wears dark brown leather gloves with the suit. 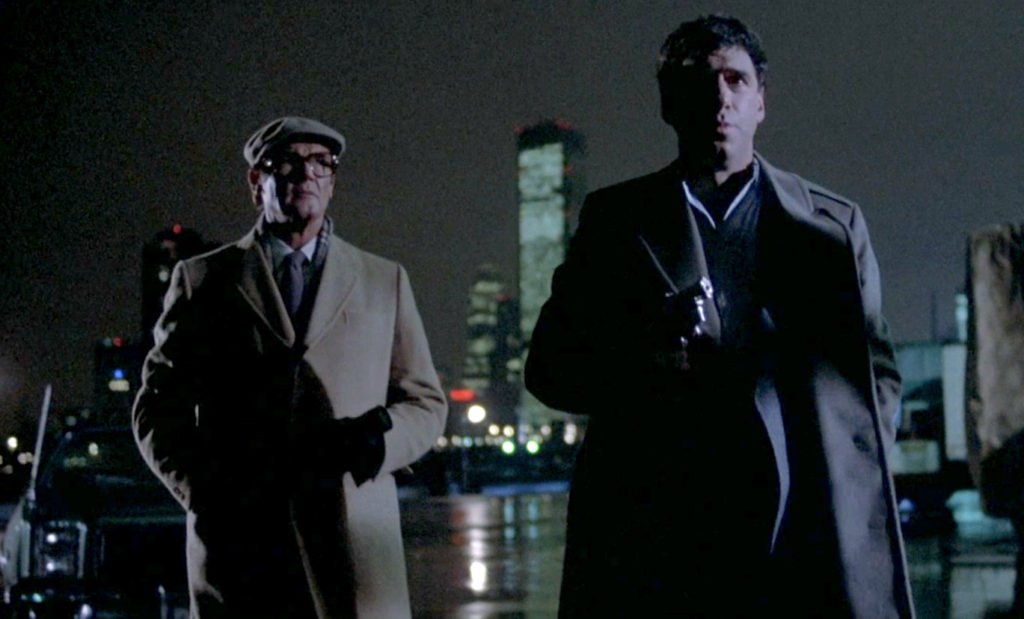 Over the suit, Moore wears a single-breasted camelhair overcoat. The full-length overcoat hits just below the knee, which keeps Moore decently warm in the cold and windy Chicago. Like the suit, it has natural shoulders with roped sleeve heads. The overcoat has set-in sleeves, three buttons down the front, swelled edges, straight flapped hip pockets, a welted breast pocket, three buttons on the cuffs and a single vent. He wears the collar turned up for extra warmth. He also keeps warm in a light brown wool flat cap, something James Bond would never wear. They’re associated with older working class men, a category Bond is never associated with. With the cap and large glasses on, Moore looks nothing like James Bond. Over the suit and under the overcoat, Moore drapes a a checked Burberry—or Burberry-style—scarf around his neck. The scarf’s base colour is pale green, the scarf’s check has navy and sky blue stripes lengthwise with black and cream stripes crosswise, and the scarf has a navy lengthwise overcheck and a rust-coloured crosswise overcheck.

Though Roger Moore’s needlecord suit in The Naked Face may not be something James Bond would wear, it’s an elegant suit for informal cool-weather wear. The outfit has a timeless look that would look just as great during this autumn season as it did thirty years ago.