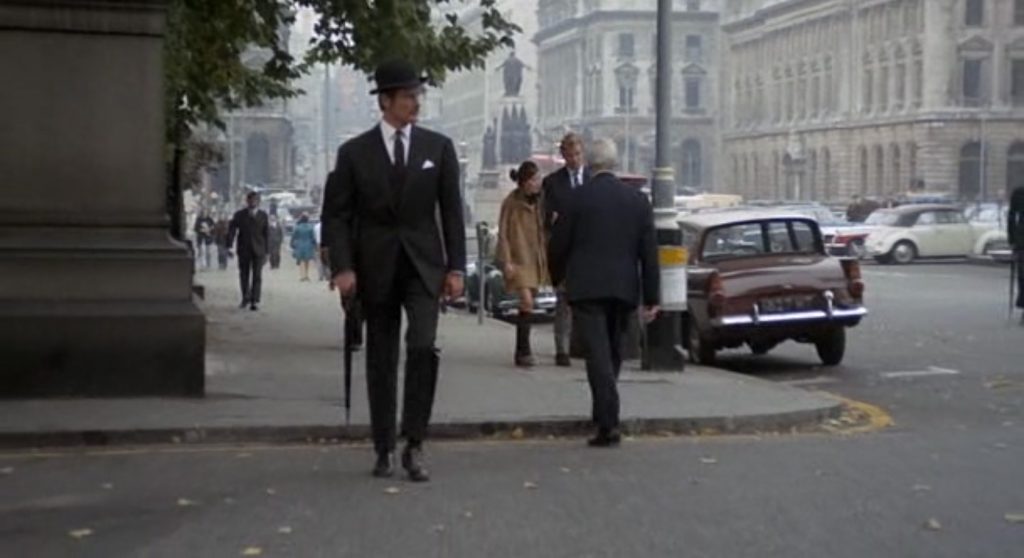 Roger Moore’s final film before The Persuaders and his tenure as James Bond was one of his most dramatic and finest performances of his career. In The Man Who Haunted Himself Moore plays a businessman named Harold Pelham who wears the same old-fashioned city uniform to the office every day. The suit is a traditional 3-piece charcoal pinstripe worsted with a 3-button jacket, and it’s cut with a draped chest, suppressed waist and soft shoulders with roped sleeve heads. The jacket has 4-button cuffs, flapped pockets and a single vent. By this time (1970), the Savile Row standard rear for a suit jacket was the double vent, though single vents were still more traditional for single-breasted jackets. Moore’s regular tailor Cyril Castle most likely tailored this suit. 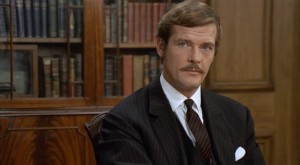 The waistcoat has 6 buttons with 5 to button. The trousers break from tradition and have a darted front and narrow legs. Only the most conservative dressers were still having their trousers made with pleats in the 1970s. Though pleats would fit the Pelham character, Roger Moore never wore pleats, even in the early 60s when they were still the default style. The trousers are also worn with a belt, another break from tradition. They are cut without a break and sit on top of black short ankle boots, the most modern part of the outfit. 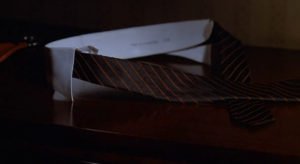 The shirt—with its starched detachable spread collar—is the most traditional part of Pelham’s outfit. A detachable collar is able to be laundered and starched separately so the rest of the shirt doesn’t end up so stiff. It’s a more formal style than an attached collar, but unfortunately starching a collar properly is almost a lost art that few outside of London can perform. Detachable collars are attached to the shirt with a stud at the front and a stud at the back. Pelham’s collar is plain white whilst the tunic shirt is white with a narrow-spaced self stripe. The shirt has a tunic collar, rounded double cuffs and shoulder pleats. Frank Foster may have made this shirt, and the pink shirt with cocktail cuffs that Pelham wears at the end shows that Foster’s work was present in this film. The tie is black with red stripes that are about the same size and space apart as the suit’s pinstripes. Striped ties with a striped suit work best when the stripes are different scales, but Pelham is not wearing this tie because of how it coordinates with the suit. Because Pelham always wears the same tie  to work it probably has a certain meaning to him. The stripes denote an association, and if anyone knows what it is I’d be interested to know. It’s probably not his club since nobody else at his club is wearing the same tie. 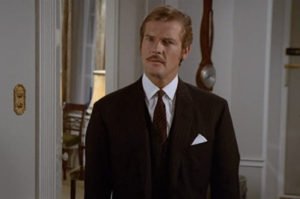 Like traditional London businessmen, Pelham wears a black bowler hat and carries an umbrella. The umbrella has a grey canopy with a curved whangee handle. He also wears a white linen handkerchief in his breast pocket folded with one point.