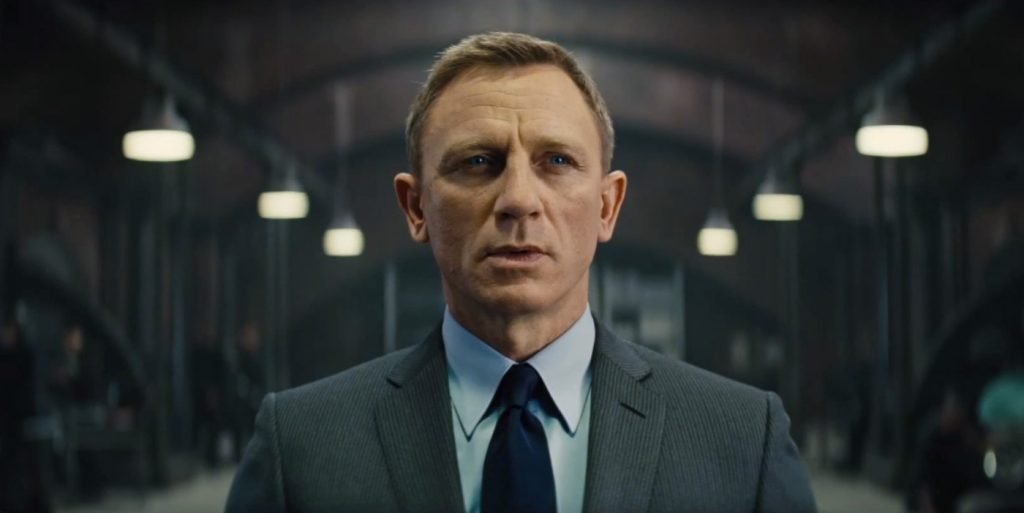 For visits to M’s office and to Q’s lab in Spectre, James Bond wears a grey herringbone track strip suit from Tom Ford. Spectre continues in the long history of Bond films where Bond dresses in stripes in London. This suit’s cloth exchanges the standard pinstripe and chalk stripe for a cloth with more interest in the stripe and in the weave. The cloth is woven in a narrow herringbone weave, which changes direction every 16 yarns. The cloth is woven with medium grey in the warp and charcoal grey in the weft for an overall vibrant dark grey. There is a white track stripe where the herringbone changes direction. The track stripe is two single-yarn pinstripes spaced a yarn apart. Because the stripe is part of the herringbone weave, it has a soft chalk-stripe-like appearance. The suiting is made of a blend of worsted wool, silk and mohair. 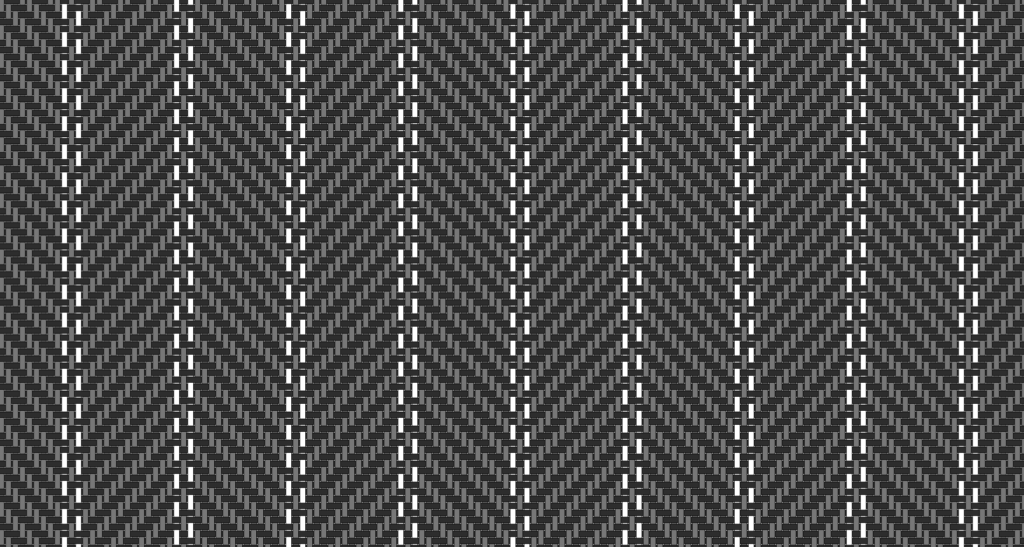 The suit is the O’Connor model designed by costume designer Jany Temime in collaboration with Tom Ford for Spectre, and it has the same cut and the same details that the other three O’Connor suits in the film have. The jacket has straight, padded shoulders with roped sleeve heads, a close-fitting chest, a too-tight waist and a fashionably short length. The front has three buttons with narrow lapels rolled to the middle button for a button two look. This is known as “button two, show one” or “three-roll-two”. The lower foreparts are cutaway and reveal a triangle of shirt below the jacket’s fastened button. The jacket is detailed with a single vent, slanted hip pockets, a curved “barchetta” breast pocket and four buttons on the cuffs. The last buttonhole on the cuffs is longer than the rest, and Bond ungentlemanly wears the last button open. 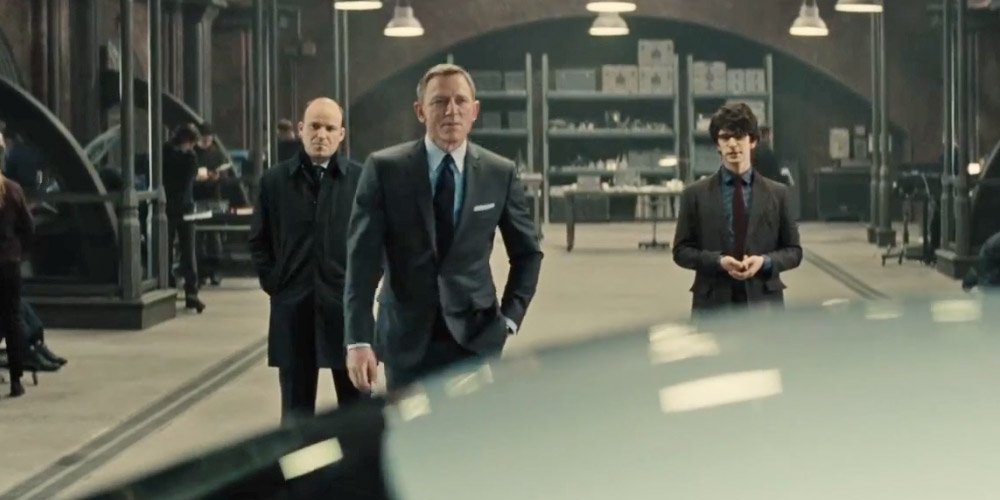 The suit trousers have a wide extended waistband, slide-buckle side-adjusters, side seams curved forward at the top with on-seam pockets, narrow straight legs and turn-ups. They have a low rise and are hemmed with no break, which means they are very short and cover little of the shoes. 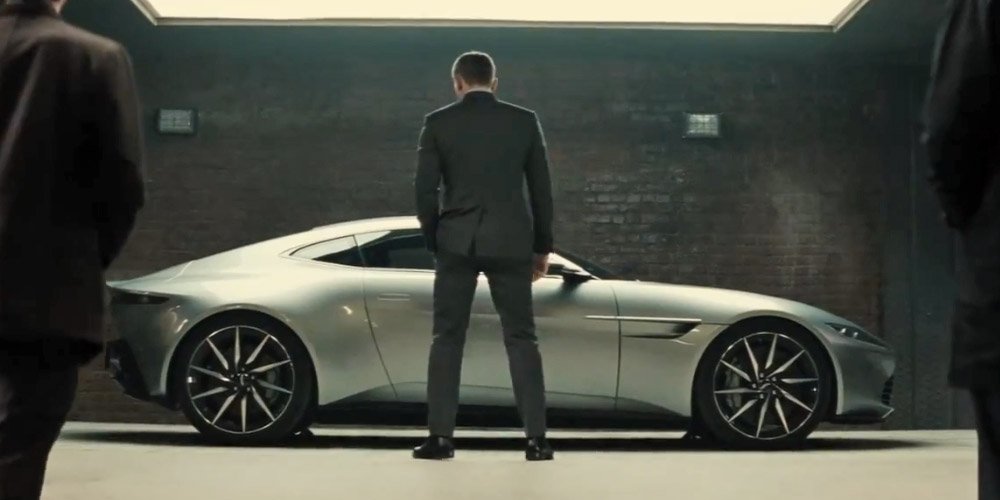 With the suit, Bond wears two different shirts and ties from Tom Ford. When he first visits M’s office he wears a white cotton poplin shirt with a medium-dark grey repp tie and no pocket handkerchief. Later when he goes to Q’s office he wears a sky blue shirt with a matching sky blue folded pocket handkerchief and a navy repp tie. The navy tie is a deep, rich blue and towards indigo on the spectrum. Tom Ford calls this tie “navy”, as opposed to the similar “ink” tie that Bond wears later in the film.

The shirts are both in the same style and have a point collar, double cuffs, a front placket and back darts, which give the shirt a close fit. The ties both are silk repp and 7.5 cm/3 inches wide. The sky blue shirt and navy tie are much more flattering to Craig’s complexion than the white shirt and grey tie since he looks better with less contrast.

Over the suit Bond wears a navy herringbone “Crombie” coat, which is the name commonly used for a three-quarter-length chesterfield coat. Tom Ford does not use the name “Crombie” for this coat, which is trademarked by the British brand Crombie. However, this style of coat is most popularly associated with the Crombie brand. The coat is made of a luxurious 51% cashmere and 49% silk blend. It has structured padded shoulders and a darted front for a closely fitted silhouette. There are three buttons down the front, which are covered with a fly. Bond only fastens the coat’s middle button. The coat is detailed with straight flap hip pockets, a curved “barchetta” breast pocket, a single vent and three buttons on the cuffs. The collar is cotton moleskin in a slightly lighter and more vivid blue than the rest of the coat. When Bond is on his way to Q’s lab he wears a long navy scarf warpped twice around the neck and looped over in front.

Bond rudely keeps his coat on in M’s office but takes it off in Q’s office. Neither Bond nor M appear to be in a rush in M’s office, so he has no excuse for wearing it. It makes the same suit look more different in the two separate scenes, when Bond really should have put on a different suit the next day. In Goldfinger, For Your Eyes Only, The Living Daylights and GoldenEye, Bond wears different suits on different days for his office visits and should have continued that tradition here.