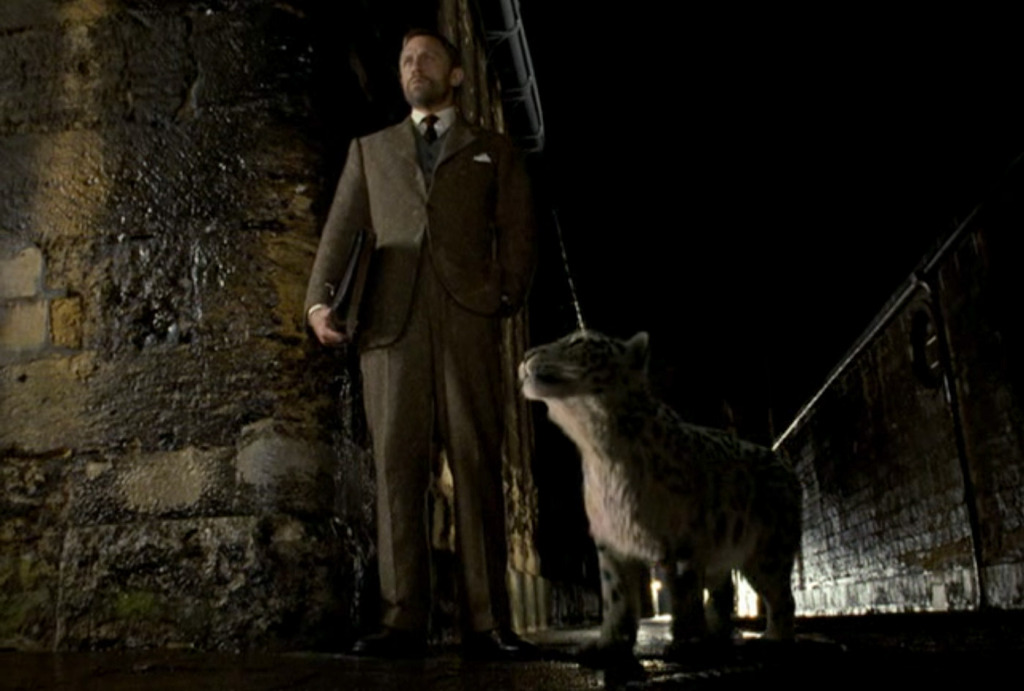 In the 2007 fantasy film The Golden Compass, Daniel Craig’s character Lord Asriel dresses in a 1940s-style brown atomic fleck tweed suit. Atomic fleck is similar to donegal tweed but has larger, more pronounced contrasting flecks and slubs. Craig’s tweed is a basketweave in brown and white with large white and yellow flecks. The flecks almost make the suit look like it is sparkling, which reflects the magical aspects of the movie. The flecks also symbolise the spots on Lord Asreil’s “dæmon”, the snow leopard. The “dæmon” is one’s soul that takes the form of an animal. 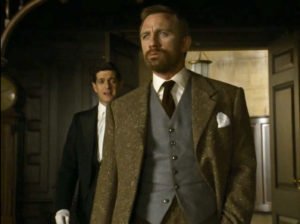 The button three suit jacket is cut with a draped chest and straight shoulders with roped sleeve heads. It has jetted pockets, three buttons on the cuffs and no vent. The suit trousers have single forward pleats, slanted side pockets and wide straight legs with turn-ups. The cut of the suit has a slight 1940s look partially due to a full-cut chest, slightly high button stance and wide trouser legs, but the heavy tweed cloth plays a bigger part in making the suit look old. The Golden Compass, however, does not take place during the 1940s or any other time in our world’s history. It’s a fantasy film that takes place in an alternate world. 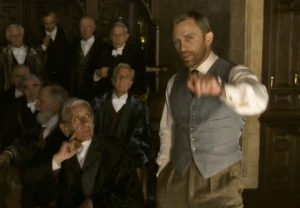 The contrasting grey waistcoat is one of the most interesting parts of the outfit. The waistcoat’s cloth is a fancy jacquard wear of rose-like diamonds. Though fancy waistcoats are typically silk, this one is not. It is most likely flannel wool. The waistcoat has six buttons, and Daniel Craig leaves the bottom button open. The buttons are shanked pewter and half of the edge is scalloped. There are four welt pockets on the front, and the edge of the waistcoat is finished like a buttonhole and stitched with brown thread. The waistcoat’s back is made in a grey lining material. Whilst the waistcoat is a very elegant and well-cut piece, its cool grey somewhat clashes with the warmth of the rest of the outfit, and it’s a missed opportunity to add more colour to the outfit. A forest green or burgundy waistcoat would add colour and better complement the brown suit 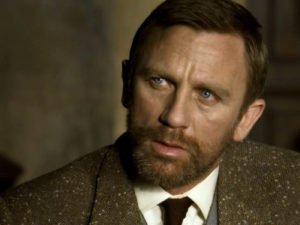 Daniel Craig’s cream shirt has a spread collar, front placket and double cuffs. The collar, placket and cuffs are stitched 1/4 inch from the edge. Craig wears a finely knitted dark brown silk tie, tied in a four-in-hand knot. He also wears a white linen handkerchief casually folded in his breast pocket with two corners pointing up, which is infinitely more stylish than if he meticulously folded and ironed the handkerchief to have two defined points sticking out. 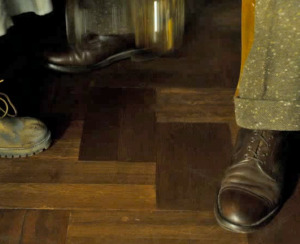 With the suit, Craig wears brown, five-eyelet, cap-toe derbys. The vamp on these derbys extends to the back of the shoe, and the eyelets are on flaps that are sewn on top of the vamp in the “blucher” style. The shoes’ wide last and rounded toe gives them a casual look beyond the metal-reinforced eyelets and thick rubber soles. They are laced in an over-under method, where the laces alternate crossing over and under the eyelet flaps. This lacing method reduces friction and is easier to tighten than typical lacing methods.