The nicest part of every Tom Ford suit in Skyfall is the suiting. The proper use of the term “suiting” is to describe the cloth a suit is made from; it’s not another word for a suit or multiple suits, like the way some brands have recently started using the term to sound more sophisticated (they don’t!). Tom Ford puts far more importance on the quality of his suiting than most fashion designers do. This suiting from Skyfall looks like a basic charcoal with a narrow-spaced grey rope stripe, but it’s a little fancier than that. The cloth is twill-woven, except on either side of each rope stripe there is a plain-woven section framing the stripe. It adds a subtle dimension to the cloth whilst still keeping it classic. 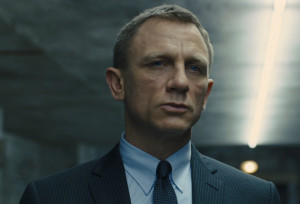 The cut and style of this suit is the same as the other suits in the film. The fit is tight and short, with narrow, straight shoulders. The jacket buttons three and the narrow lapels roll at the top button, though the tight fit in the chest pulls it open down to the fastened middle button. It is not a three-roll-two like the Quantum of Solace suits. The buttons are placed lower than on most current suits, which is both bad and good. The bad part is that it emphasises how short the jacket is, and the buttons look very low on the jacket. But the good part is that the middle button fastens exactly where it should: at the waist. The button at the waist means that not as much shirt can show above the trousers as on the typical “slim fit” suit, and it helps the jacket to move better with the body. A lower button stance also makes the chest look stronger, which is why a high button stance is rarely a good thing. The flapped hip pockets are on a shallow slant, and the cuffs have three buttons with last one left open. There is a single vent at the rear. The suit trousers have a flat front and are cut with a low rise and narrow leg, and they have a short hem with turn-ups. The trousers have side adjusters with slide buckles and an extended waistband with hook closure. 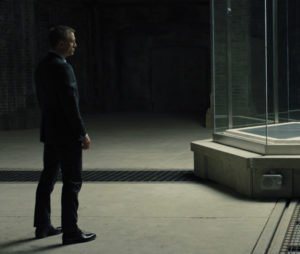 Bond’s pale blue poplin shirt—also made by Tom Ford—has a soft tab collar, a placket down the front and double cuffs. A pale blue cotton handkerchief folded in the pocket matches the shirt. The tie is made in the same weave as the black and silver tie worn with the pick-and-pick suit earlier in the film. This one is a pattern of light blue-grey and charcoal. The shoes are the black Crockett & Jones Highbury model, a 3-eyelet derby with Dainite rubber studded soles. The Dainite soles are useful in the scenes where this suit is worn because they provide the extra needed traction over traditional leather soles. 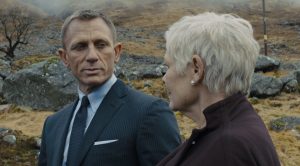