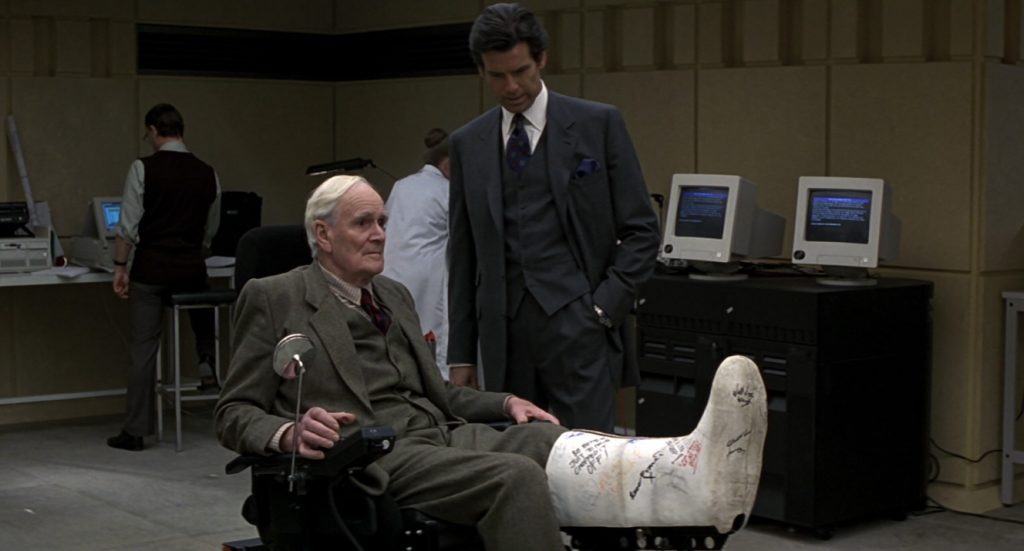 For GoldenEye, costume designer Lindy Hemming commissioned three different three-piece suits—plus plenty of extras—from Brioni. But only one suit’s waistcoat made it into the film, and that suit is the charcoal grey one with a blue windowpane. The charcoal ground is slightly iridescent, containing threads in differing shades of grey. The windowpane suit is not a very common one, and it’s most often seen in more rustic cloths or as part of a Prince of Wales check. But a windowpane on a city suit is quite elegant, and Bond’s example subtly stands out amongst the more typical solids and stripes.

This Brioni suit is made in their “Augusto” model with their typical straight shoulder, and like Brosnan’s other suits in GoldenEye it is slightly tapered through the body and has a low button stance. The suit buttons three and has four buttons on the cuffs, double vents and slanted pockets with a ticket pocket. The latter two add an Anglicised flair to the 1990’s Italian cut to create an almost timeless look. The suit’s trousers have double reverse pleats and turn-ups. The waistcoat buttons six. 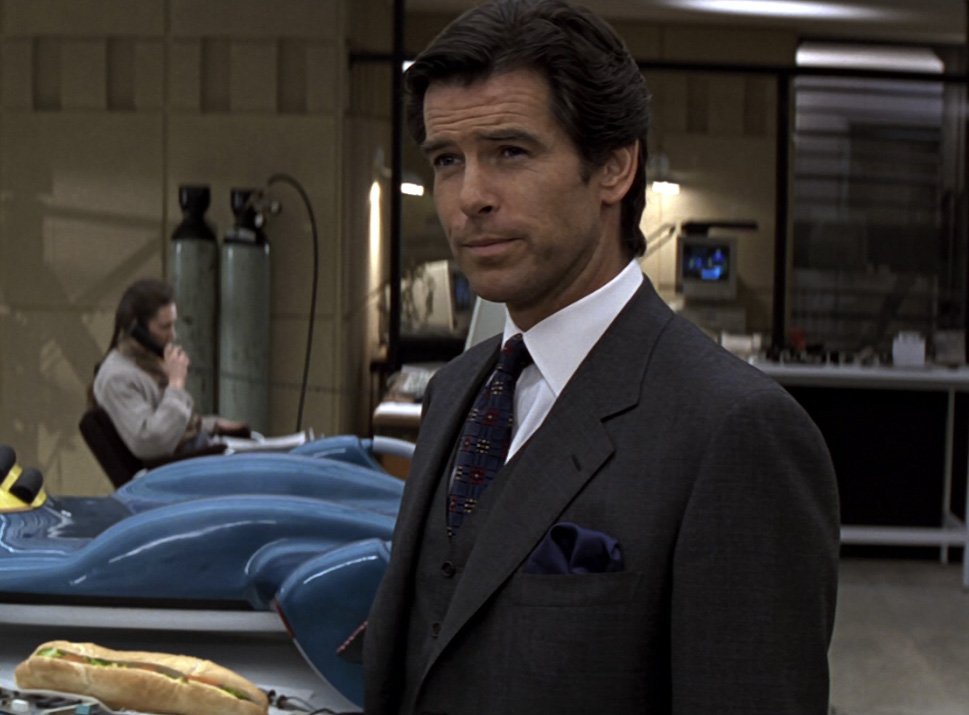 Brosnan wears two shirt with this suit: an ivory shirt in London and a french blue shirt in Saint Petersburg. The french blue shirt, which was very popular in the 1990s, has a semi-solid appearance that suggests an end-on-end weave. The shirts are made by Sulka and have a moderate spread collar, placket front and double cuffs. The same tie is worn with the two shirt. The tie is a grid pattern of red, cream and yellow on a dark blue ground and outlined in black. A puffed silk handkerchief in the breast pocket coordinated with the blue ground of the tie.

An example of this suit was sold at auction at Bonhams in Knightsbridge on 6 Mar 2007 for £8,640. The lot included a blue Sea Island cotton shirt from Turnbull & Asser and a Simpsons of Piccadilly tie in navy, red, beige, brown and green that was made for GoldenEye but unused. I suspect it was to be used with one of the two shirts instead of the same tie being used with both shirts. The auction listing also mentions a cloth label inside the suit that reads “MARK SOUTWORT REF 3.”