The Cannonball Run is almost like an eighth film to feature Roger Moore playing James Bond. Moore plays Seymour Goldfarb, Jr., who identifies as “some goy movie star named Roger Moore,” as his Jewish mother says. In pretending to be Roger Moore, Goldfarb naturally acts and dresses like James Bond. Moore’s performance in The Cannonball Run (essentially as James Bond) is even more tongue-in-cheek than in his Bond films, but here that kind of performance is welcome. Like James Bond, Goldfarb also drives a Aston Martin DB5 in Silver Birch. This exact car was one of the four Aston Martins used as Bond’s car in Goldfinger and originally was registered BMT 216 A (it is registered 6633 PP in The Cannonball Run). This same car was originally featured in an episode of The Saint titled “The Noble Sportsman” made in 1963 and painted Dubonet Red. Also like James Bond, Goldfarb sleeps with a gun under his pillow. His gun is a Walther PP, the same as what James Bond uses in the film Dr. No. 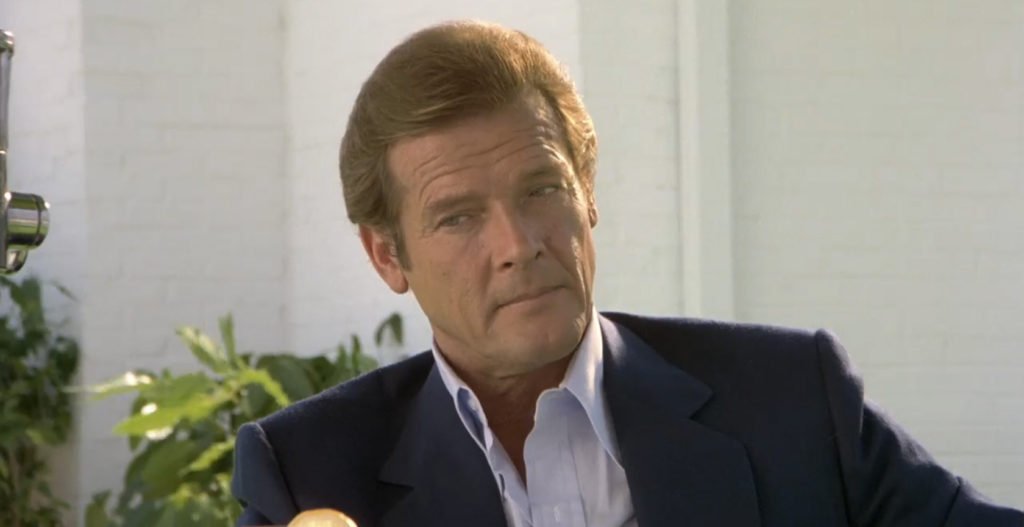 As for dressing like James Bond, Moore’s character has the right idea but doesn’t get everything quite right in his execution, especially not with the three black tie outfits. The best outfit he wears is the navy blazer and beige trousers when the character is introduced. The outfit overall is similar to the blazer Moore later wears as James Bond when selecting a horse with Max Zorin (Christopher Walkin) in A View to a Kill, minus the day cravat. Since the film was made in America, the clothes would have been sourced in America, and it shows in the details.

The button two navy blazer’s silhouette, however, is still English-inspired with straight shoulders, roped sleeve heads, a nipped waist and a flared skirt. The details are common for American blazers: patch pockets (at least the hip pockets; I can’t tell if the breast pocket is) and a single vent. The blazer has three buttons on the cuffs, and the blazer’s buttons are shanked brass. The notched lapels are a little wide, but overall they don’t look particularly dated. 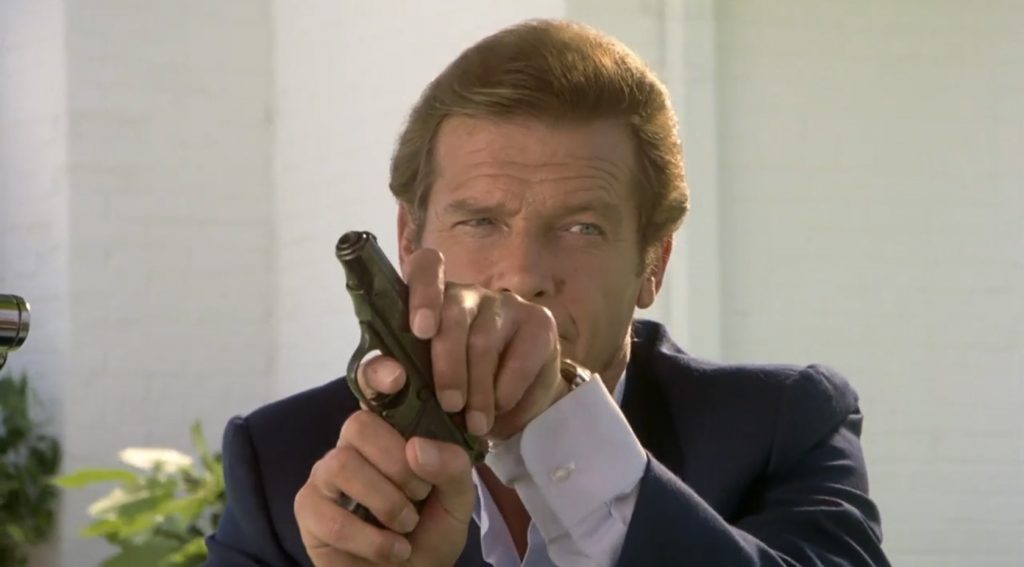 The beige trousers that Roger Moore wears with the blazer are cut with a flat front and straight legs. The waistband has side adjusters and a hidden clasp closure. The side pockets are slanted. Moore’s pale blue shirt has a long point collar worn open, rounded single-button cuffs and a wide front placket. The shirt was most likely American-sourced and probably has a breast pocket. The collar and cuffs are stitched 1/4 inch from the edge, and the placket is stitched about 3/8 inch from the edge. As Seymour Goldfarb, Moore wears an accessory he rarely wears as James Bond: a pocket square. Moore’s is a light blue silk handkerchief rolled in his breast pocket. Moore wears dark brown socks and dark brown lace-up shoes, contrasting with the slip-on shoes he ordinarily wears.