Three is the most traditional number of button for the front of a suit jacket or sports coat. Not all jackets with three buttons are created equal, and there are a few different ways the lapels can be cut and sewn to control the way the lapel rolls. The lapels may start above the top button, they may extend down to the middle button, or they could roll to somewhere between the top two buttons. Lapels can be pressed flat, they may have a gradual roll, or they may be somewhere between. Lapel roll can’t always be defined as one type or another, but most jackets with three buttons can be placed into one of three general categories.

The full button three suit is today what is most associate with the 1990s, but it’s the oldest of the jacket buttoning styles that is still accepted today. In the early days of the modern lounge suit in the late 19th century, it was popularly worn alongside the button four jacket. By the 1930s, the button four had fallen out of favour and various types of button three jackets reigned king for decades.

Though the top button on the full button three is able to fasten, it does not need to be fastened. Both the top and middle buttons or only the middle button may be fastened—the bottom button is rarely designed to fasten. On fused examples where the lapels fold flat against the chest, the jacket looks best with both buttons fastened.

Though the full button three is out of favour today, it is still popular for English country wear. This popularity comes from both tradition and practicality. The English countryside is a cool place, and being able to fasten the top button provides extra protection from the weather.

James Bond first wears the full button three jacket in Diamonds Are Forever in Sean Connery’s brown herringbone and brown checked jackets. On these jackets the lapels gently roll to just above the top button, and Connery stylishly fastens only the middle button of both jackets. In the case of the herringbone jacket, leaving the top button open allows a henchman reaching inside for a gun to get his hand caught in a trap.

The full button three returned on two of Roger Moore’s Douglas Hayward three-piece suits in For Your Eyes Only and Octopussy. Their buttoning style is similar to Connery’s in Diamonds Are Forever, but the button stance is lower, and the buttons are placed closer together. Timothy Dalton later wears a navy chalk stripe suit in this style in The Living Daylights. Moore wears his suit jackets either fastened at the middle or not fastened at all, and Dalton never fastens his button three jacket.

Many bespoke makers and high-end brands, from both Britain and the European continent, cut the lapels on their button three jackets to roll slightly over top button but not to obscure the top button. Knowing that most stylish men choose to button only the middle of their three buttons, this style gives the top button a reason to be left open while still maintaining the jacket’s button three identity. The internet has dubbed this style the “3-roll-2.5”.

This style first features when George Lazenby introduces the button three jacket to James Bond in On Her Majesty’s Secret Service. Lazenby wears this style on two navy three-piece suits, a light blue two-piece suit and a houndstooth checked hacking jacket, all made by Dimi Major, and he wears these examples either open, buttoned at the middle or buttoned at both the top and middle. The lapels on all of these naturally roll to between the top and middle buttons, but the lapels can be pushed back to comfortably fasten the top button. Lazenby is the only Bond who ever fastens the top button of his button three jackets.

The 3-roll-2.5 suit became the predominant style that James Bond has worn since the 1990s, starting when costume designer Lindy Hemming and Brioni took control of Pierce Brosnan’s suits for GoldenEye in 1995. Though button three suits were very popular at the time Brosnan was Bond, he never fell victim to the 1990s trend of flat lapels that almost required to be buttoned at the top as well as at the middle. Brosnan either buttoned his suits at only the middle button or didn’t button them at all.

The lapels on Brosnan’s button three suits in GoldenEye, Tomorrow Never Dies, The World Is Not Enough and Die Another Day are cut to end just at the top button, but they are designed to roll down over the top button a little when only the middle button is fastened.

Brioni suits have a softer construction than Bond’s previous English suits, and because of this the front of the jacket rolls out a bit above the middle button and into the lapel when only the middle button is fastened. This gives the look of a lapel line that extends through the top button, but the lapel itself is cut and sewn to end at the top button. The roll on the Brioni suits is not as pronounced as on the Dimi Major suits because the construction is softer and lighter, so the lapels do not have as much support for a roll. Jackets in heavier fabrics will tend to roll out more over the top button because there is more support for more roll.

When Daniel Craig started as James Bond in Casino Royale in 2006, Brioni stayed on and continued to make the same 3-roll-2.5 style that they made for Brosnan, just in a higher button stance to follow current trends. Craig’s suits have a closer fit in the chest than Brosnan’s have, and because of this the lapel roll is pulled out a little further on Craig’s suits, thus extending the lapel line further down.

The 3-roll-2.5 returned again on Daniel Craig’s Tom Ford suits in Skyfall. The lapels on the Skyfall suit jackets break below the top button, and they roll through but not completely over the top button. These lapels do not extend down to the middle button of the jacket, but because the fit is so tight in the chest, the front of the jacket spreads open down to the middle button but the revers do not show below where the lapels end. The style of the Skyfall suits is often mistaken for the next style down the spectrum of button three jackets.

Also called “button two, show one”, “3/2 roll”, “three button two”, “three-button, button on centre”, the three-roll-two is a common style with softer tailoring. Tailors in southern Italy, most notably in Naples, are known for cutting this style, which goes well with their soft tailoring. Traditional American brands like Brooks Brothers and J. Press popularised this style in the United States with their natural-shouldered un-darted sack suits, with Brooks Brothers starting to sell it at the beginning of the 20th century. Also, some of the softer English tailors like Anderson & Sheppard and their disciples are fond of this style.

Cary Grant’s famous blue-grey suit in North By Northwest has a three-roll-two cut. The style does not appear in the James Bond films until A View to a Kill, when Roger Moore wears a soft charcoal woollen flannel suit made by Douglas Hayward. The lapels roll out over the top button and gradually blend in with the front of the suit until they reach the middle button. This is the way the British typically do a three-roll-two, with a gradual roll.

The three-roll-two later returned to the Bond series on Daniel Craig’s Tom Ford “Regency” suits in Quantum of Solace. These suit jackets have a bit less of a lapel roll and can more easily be mistaken for button two jackets when worn buttoned if it weren’t for the buttonhole in the middle of the left lapel. This style returned on Daniel Craig’s Tom Ford “O’Connor” suits in Spectre, which differed in its lapel roll from the “O’Connor” model in Skyfall.

The linen and silk blend Brunello Cucinelli jacket in Spectre is an unstructured button three jacket with the lapels cut to roll over the top button, but because the jacket fits rather snugly on Daniel Craig and there is nothing to hold the lapels back, the lapels roll naturally to the middle button when the jacket is fastened only at the middle button. This is reminiscent of the soft southern Italian tradition of the style.

A Spectrum of Styles

Because these three different styles fall on a spectrum, the placement of Bond’s suits into the three categories isn’t cut and dried. There’s no fine line between the different styles, particularly when the lapel rolls are very gradual. All of these variations can have a place in a man’s wardrobe, and the styles that a man chooses to wear can be determined by personal taste or by fashion trends.

Lapel roll is mainly a function of the way the jacket is cut and sewn. The amount of roll is controlled by the cut of the lapel, where the lapel is attached to the collar and how the innards of the suit are constructed. Pressing cannot properly change a lapel roll. Improper pressing can flatten a rolled lapel, but it’s not always possible to give life to a lapel that is intended to fold flat. Pressing may attempt to move where the lapels roll, but it will often be unsuccessful and cause the lapels to not lie properly against the jacket.

No matter the style of button three, the most Bondian way to wear the jacket is to only fasten the middle button. Every Bond after Lazenby fastens only the middle button, which is usually—and most effectively—placed at the waist to act as a fulcrum for both visual balance and to match where the body pivots. The latter is especially important for action since a button that is placed too low or too high restricts movement.

You can read more about the different variations of the button three jacket in an excellent article at Nouveau Vintage.

This article is an updated and expanded version of an article originally published on 1 December 2012. The comments from that article have been retained below. 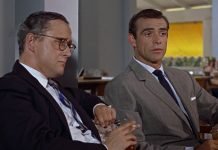