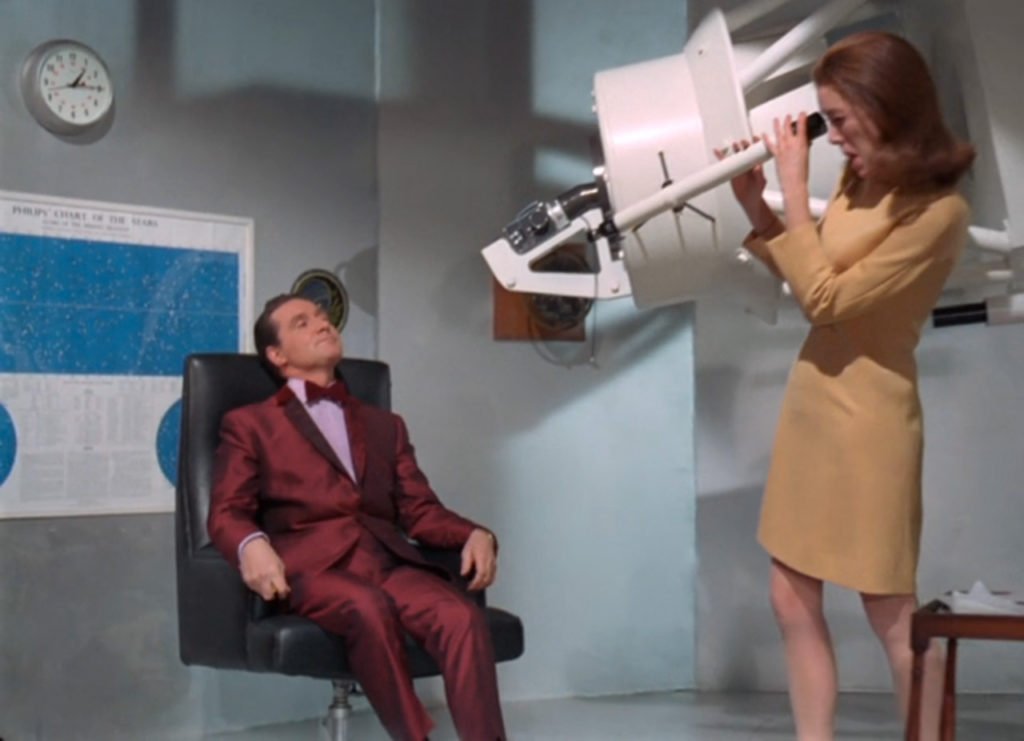 The first episode of The Avengers in colour, “From Venus with Love” in 1967, takes full advantage of colour by placing Patrick Macnee’s John Steed in a claret red dinner suit. I was inspired to write about this outfit after seeing Selma star David Oyelowo wear a very similar—and equally effective or ineffective, depending on your opinion—outfit at the Oscars last week. Though Steed breaks the rules of black tie, he does so in a creative way. If one is going to break the rules of black tie, breaking the rues should not turn a dinner suit into an ordinary lounge suit. More than one button on a single-breasted dinner jacket, flapped pockets and single vents (or even double vents by some standards) and very boring and pointless ways to mess with black tie tradition. If you are going to break black tie, at least be original! Steed demonstrates how to be creative with black tie, as he does with all of his tailored clothes. If you don’t like this dinner suit, which I’m sure many of you will not, there are photos of Mrs. Peel here to make this article more enjoyable.

Rather than the traditional black or midnight blue, Steed’s dinner suit is made in a colour often used for the garment that inspired the dinner jacket: the smoking jacket. Claret red is a rich colour appropriate for the evening, unlike the shades of grey that a number of men wore to the Oscars this year. Additionally, the dinner suit is made of blend of wool and mohair, a luxurious and appropriate for evening clothes. The cloth has a very high mohair content and reflects a lot of light, making it look lighter than it is in a brightly-lit room. 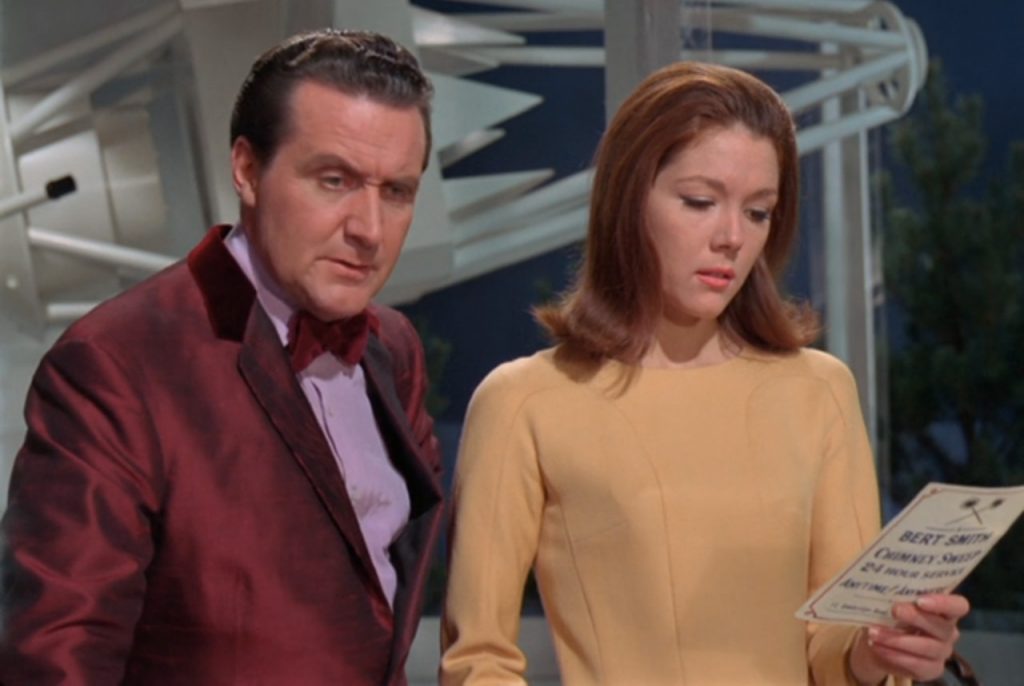 This dinner jacket follows Steed’s signature style: a button one jacket with slanted hip pockets, no breast pocket, double vents and a velvet collar. This style is partially inspired by riding jackets, but it works well for an adventurous dinner jacket. Steed’s signature style already has a single button on the front, as a dinner jacket should. The slanted pockets aren’t a big deal since they are jetted. Though the traditional dinner jacket has no vents, double vents are the more acceptable—and dressier—vent style over a single vent. The burgundy velvet collar may be the oddest part of this dinner jacket, but it’s not entirely inappropriate since it recalls the material the smoking jacket is made from. The dinner jacket has buttons covered in silk, and there is one button on each cuff. 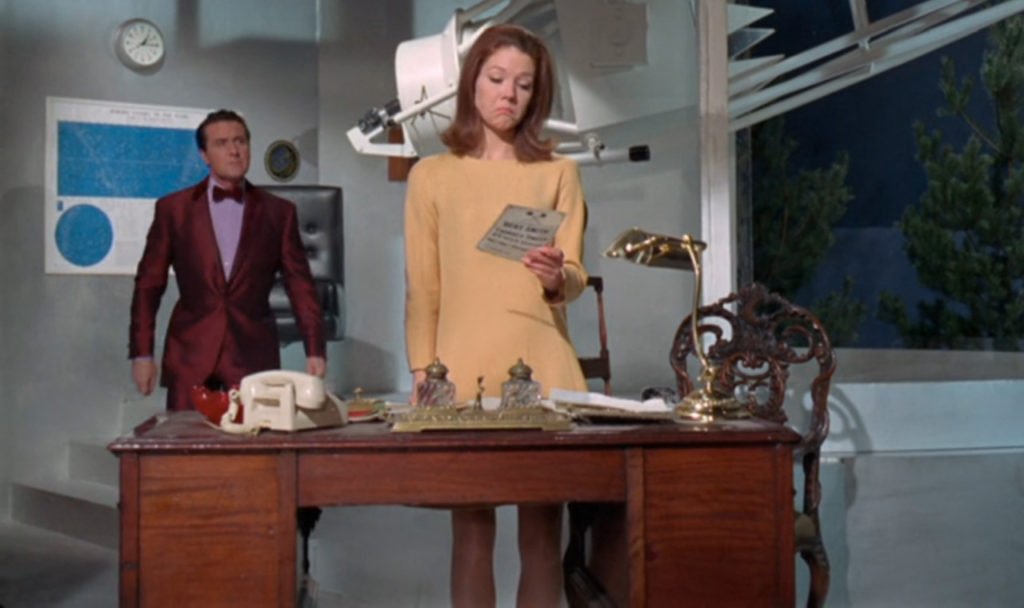 Tailor Bailey and Weatherill of Regent Street tailored this suit in a traditional English equestrian cut, with strong straight shoulders, a clean chest, a closely fitted waist and a flared skirt. The equestrian cut is similar to the military cut and has a very formal look that is appropriate for a dinner jacket. The dinner suit’s matching trousers are tailored with narrow, tapered legs and are without pleats. They do not have a stripe down the legs.

Steed not only makes bold choices with his dinner suit but also with its accessories. A pale lilac dress shirt—which may be made of silk—stays in the red family but still contrasts with the bold dinner suit. It has a wide spread collar, double cuffs and a plain front. The bow tie is red velvet, which matches the dinner jacket’s collar rather than lapels. Proper black tie means that the bow tie must be black, but since so many other rules are broken here it doesn’t really matter. Steed’s socks are dark burgundy and his chelsea boots are black. Chelsea boots work well for black tie because of their sleek plain-toe, side-gusset design, and they look neat with the narrow trouser legs. 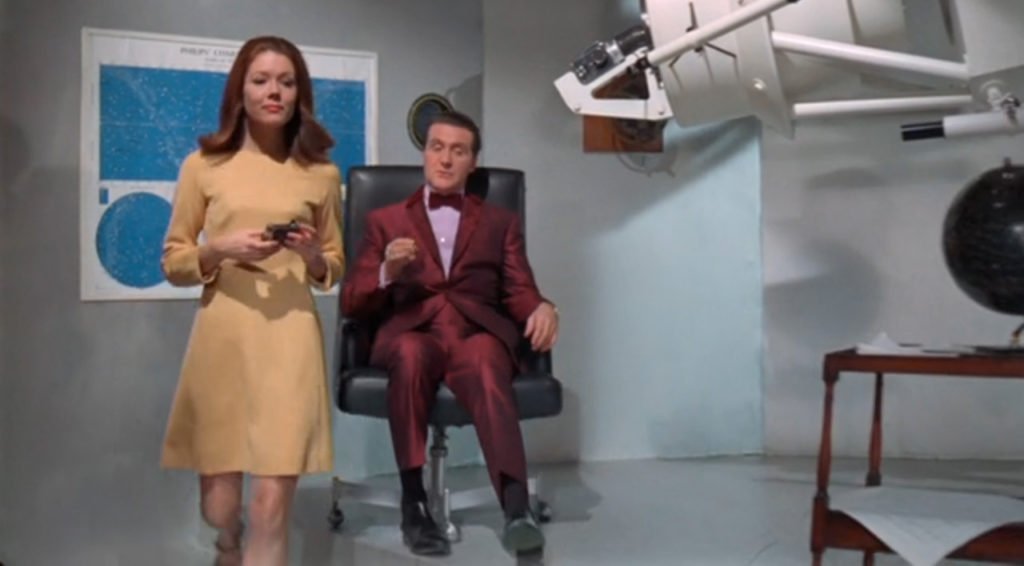 Ultimately, John Steed’s claret red dinner suit would be best worn for a “creative black tie” dress code, or by the host an intimate black tie dinner. It breaks the rules of black tie in creative ways, but it perhaps breaks the rules so much that it doesn’t even resemble a dinner suit much anymore. Nevertheless, it is suit inspired by black tie that certainly looks like it is meant to be worn in the evening, and for that it is a successful design. The outfit’s contrast of intense and muted colours has the same effect as the traditional black tie outfit’s black and white contrast. Steed may not be dressed conservatively like James Bond in an episode with a Bond-inspired title, but not all spies need to be inconspicuous. 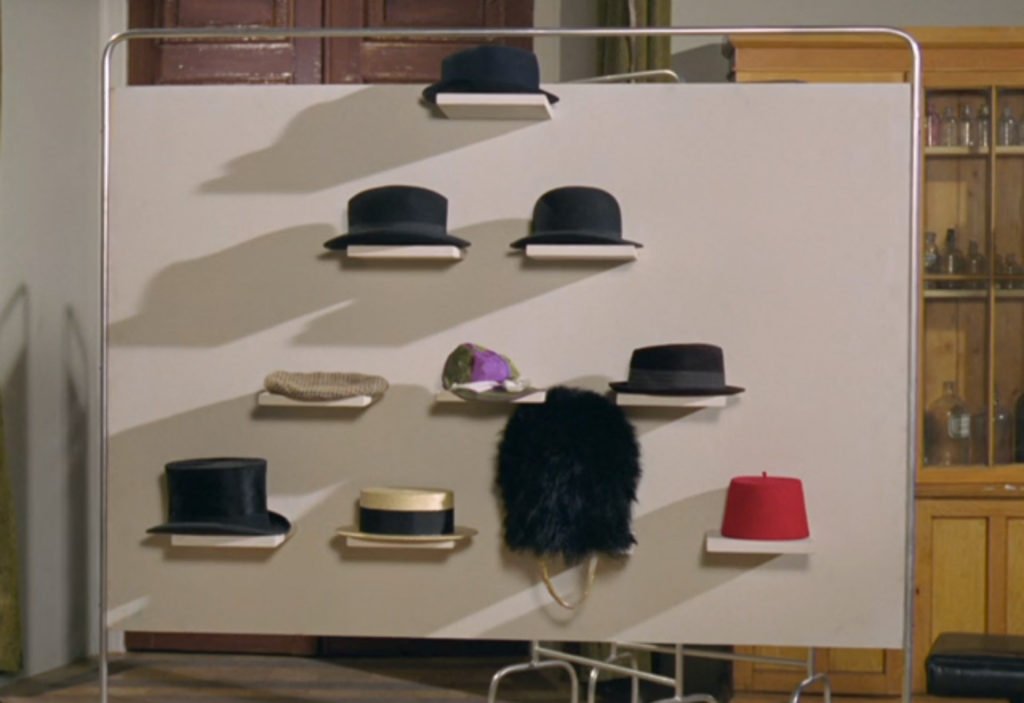 Unrelated to this dinner suit, “From Venus with Love” has an amusing scene where Steed takes an eye exam of hat styles on shelves rather than letters on a chart. “From the top, if you please”, says the ophthalmologist. “Trilby, homburg, bowler, cap. Jockey, porkpie, topper, boater, busby, fez,” replies Steed, as he passes the eye exam swiftly and perfectly!