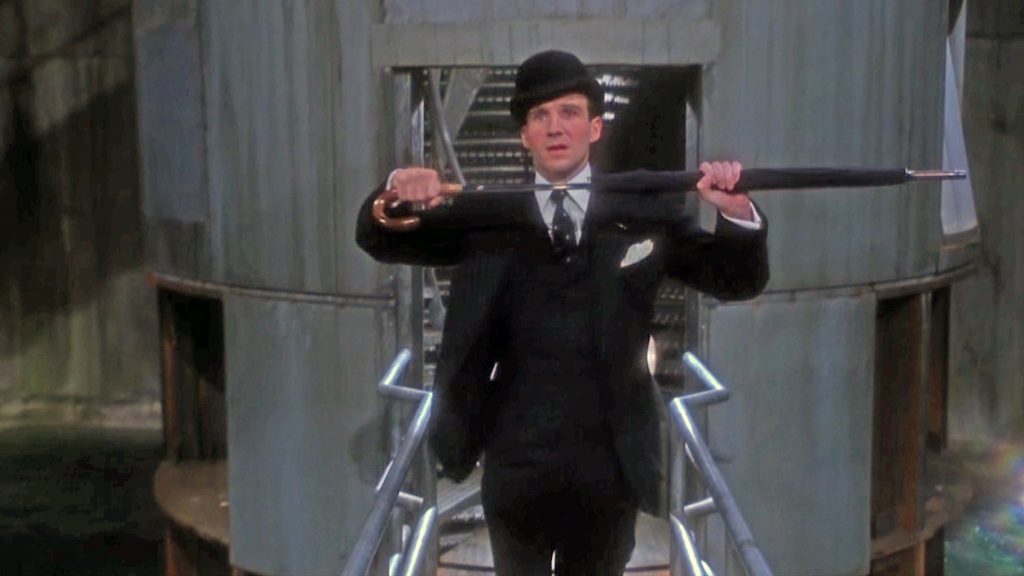 The 1960s Avengers television series, in its incarnation starring Patrick Macnee as John Steed and Diana Rigg as Mrs Emma Peel, was remade into a film in 1998 called The Avengers. In the film, Ralph Fiennes, who is now know to James Bond fans as Gareth Mallory or M, plays Steed and Uma Thurman plays Dr Peel. Patrick Macnee’s voice gets a cameo as Invisible Jones. The original film James Bond Sean Connery also stars in this film as the villain Sir August De Wynter.

The costume designer is Anthony Powell, who previously dressed Roger Moore in That Lucky Touch. Powell chose the legendary Savile Row tailor Anderson & Sheppard to make Fiennes’ suits for the film, which give his clothes a very British look, but one far removed from the equestrian tradition that the original character wore.

Though both Fiennes’ Steed and Macnee’s Steed wear three-piece suits and bowler hats and carry umbrellas, the way they otherwise dress is so different that it is hardly worth comparing. The elements that overall define the original Steed’s look are present in Fiennes’, but the execution is considerably different. Partially due to Anderson & Sheppard’s involvement, Fiennes’ clothes are more subdued, old-fashioned and give his Steed a more traditional City of London look, whereas Macnee’s Steed always wears more fashion-forward equestrian-inspired suits to honour his namesake. 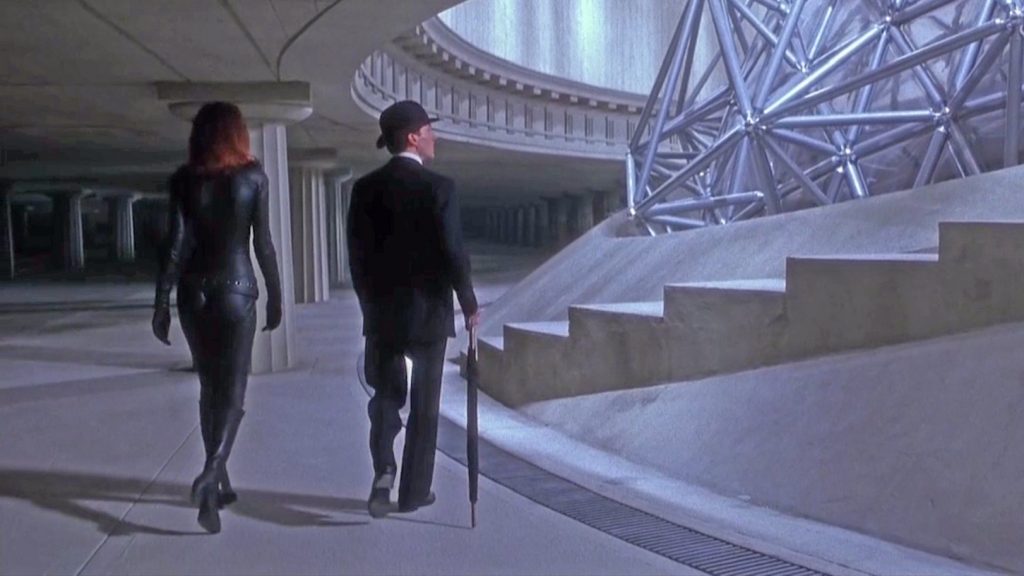 An article in the Sunday Mirror on 2 August 1998 titled “The Avengers: The making of the movie” stated that costume designer Anthony Powell and Ralph Finnes visited London tailors to find a suitmaker for the film. Most of Savile Row’s tailors were unable to create the film’s needed 70 suits in a rush, let alone just one suit. Powell said, “Fortunately, we went to tailors Anderson and Sheppard. Their style is very soft and comfortable. It’s a lovely old-fashioned place, and their motto is, ‘We don’t build bodies, we drape them.'”

Though Anderson & Sheppard made the suits for Fiennes, Steed’s suits within the story of the film are made by the fictional Trubshaw & Co, Gentlemen’s Outfitters. According to a Staffordshire General & Commercial Directory from 1818, there was a tailor named John Trubshaw in Cannock, Staffordshire, though there’s unlikely to be any connection to the character in The Avengers. Trubshaw in the Avengers film is played by John Wood. The scene in the clothing shop identifies Steed as a clotheshorse who likes to take time getting fitted for his “armour” and provides a venue for Steed and Peel to get to know each other early in the film.

Fiennes’ most iconic outfit in this film is a three-piece charcoal flannel chalk stripe suit made in Anderson & Sheppard’s house style, which he wears at the climax of the film. The iconic nature of this suit comes from the horizontal stripes on the waistcoat, which will be discussed later. The suit can also be seen on many of the film’s protional materials, which show it off much better than the action within the film does. One poster for the film emphasises Fiennes’ clothes, with the tagline, “JOHN STEED: SAVING THE WORLD IN STYLE”. There are few hero shots of Fiennes in this suit in the film. 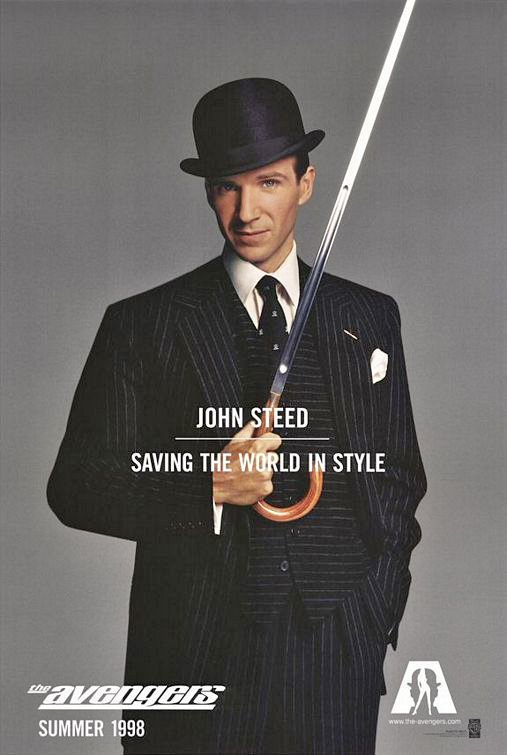 The suit jacket has Anderson & Sheppard’s famous drape cut, with extra fullness on the sides of the chest folded in front of the armholes. The shoulders are lightly padded for a straight line along the shoulder, and the shoulders are slightly extended. The waist is gently nipped for an elegant silhouette. The jacket has a full cut, which is due to a combination of Anderson & Sheppard’s style and the full-fitting trends of the 1990s. The fit is good, with the exception of sleeves that are too long. 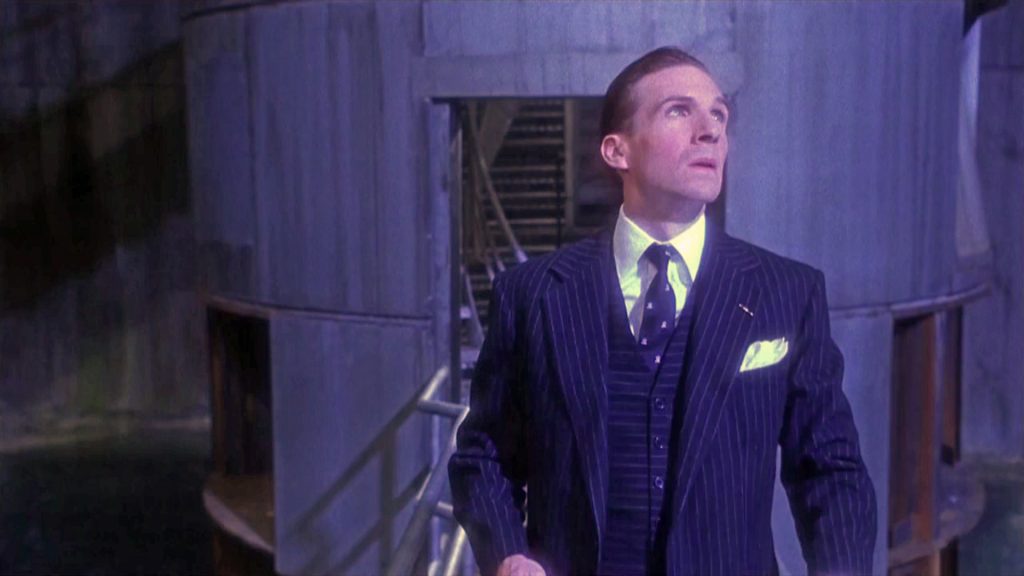 The suit jacket has two buttons on the front, four buttons on each cuff and the old-fashioned, dressy and minimalist details of no vent at the rear of the jacket and jetted pockets without flaps. Consistent with Anderson & Sheppard’s style, the pocket jettings are matched vertically with the stripes on the front of the jacket rather than cutting the jettings lengthwise and leaving out the stripes from them altogether. Anderson & Sheppard’s method gives the jacket a more seamless look, but it takes more effort to match everything.

The trousers are traditionally cut with double forward-facing pleats and cut full through the thighs and gently tapered down to a wide opening with turn-ups. The trousers are cut with a raised fishtail back to be supported by braces, and the front and rear buttons to hold the braces on are all sewn to the outside of the waistband. The braces are burgundy boxcloth in an X-shape with white goatskin leather ends and brass fittings, almost certainly made by Albert Thurston. Boxcloth is a heavy, felt-like woollen cloth, and because it is so heavy the excess from when the braces are tightened hangs down in front. 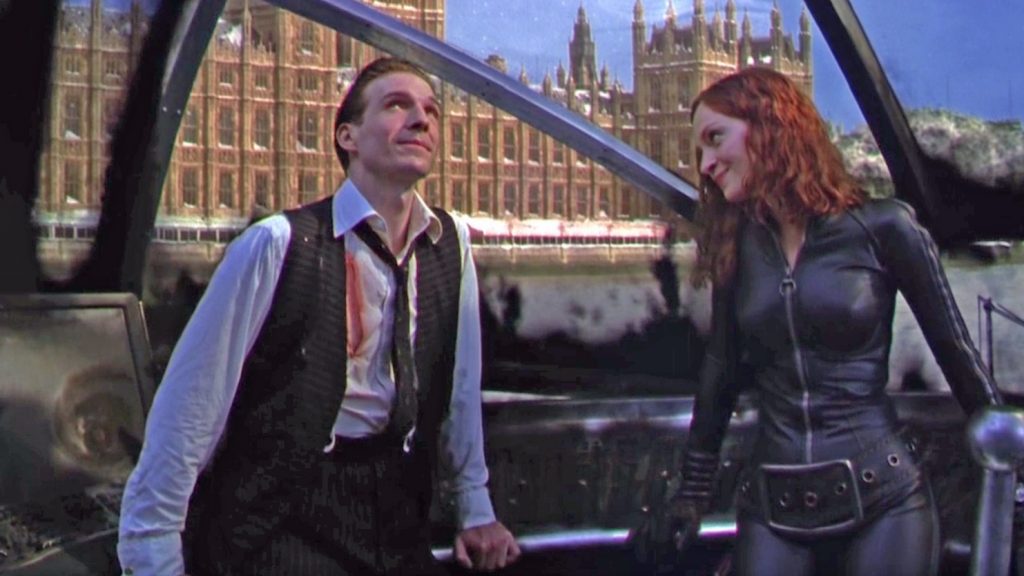 Steed’s suits in the television series always have some sort of quirky element, and as traditional this suit may be, it too has something quirky about it. The waistcoat, cut with the stripes crosswise instead of lengthwise like on the jacket and trousers, gives this suit its unusual character. The crosswise stripes serve little purpose other than to make this suit look unusual. Contrary to popular belief, horizontal stripes are scientifically proven to be more slimming than vertical stripes, though in the case of making only the waistcoat’s stripes horizontal the effect is neutralised. Here the horizontal stripes only create chaos by having the suit’s stripes in all different directions.

Fiennes’ white shirt is classically styled with a semi-spread collar, double cuffs and a placket front. He wears shirts in these scenes from two different English makers, based on two different placket designs that appear. Sometimes the shirt placket is narrow and stitched at 3/8″ from the edge. Other times the placket is wider and stitched at 1/4″ from the edge like a standard placket. Shirts with the former English-style placket are from Turnbull & Asser. The double cuffs are square with the link holes placed very near to the fold, which is a signature of Turnbull & Asser. His cufflinks are gold and double-sided. 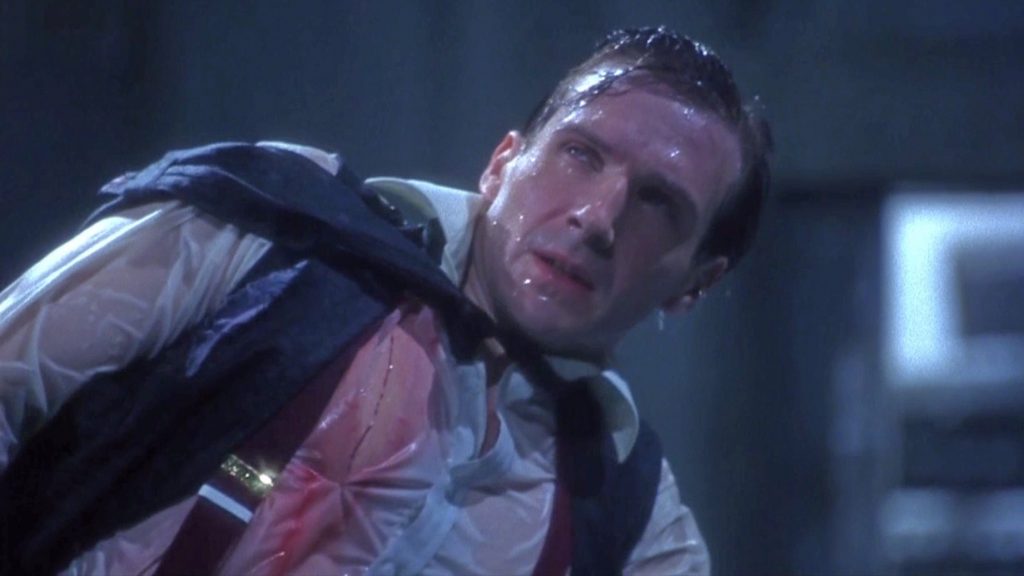 The tie is navy with a white unidentified motif and tied in a four-in-hand knot. Fiennes accessorises the outfit with a hand-rolled linen handkerchief stuffed into his welt breast pocket. He also wears a pocket watch in his breast pocket, with a chain hidden under the lapel and a t-bar fob held in the lapel buttonhole. He finishes the outfit with a black felt bowler hat and black calf cap-toe oxfords.

A John Steed outfit would not be complete without an umbrella—or “brolly”. In the Avengers film, Fiennes’ brolly has a smooth, polished wood crook handle—possibly malacca—instead of the television Steed’s usual whangee crook handle. The brolly has a built-in sword. The sword brolly was an idea taken from the television series that was used very infrequently in the original series. 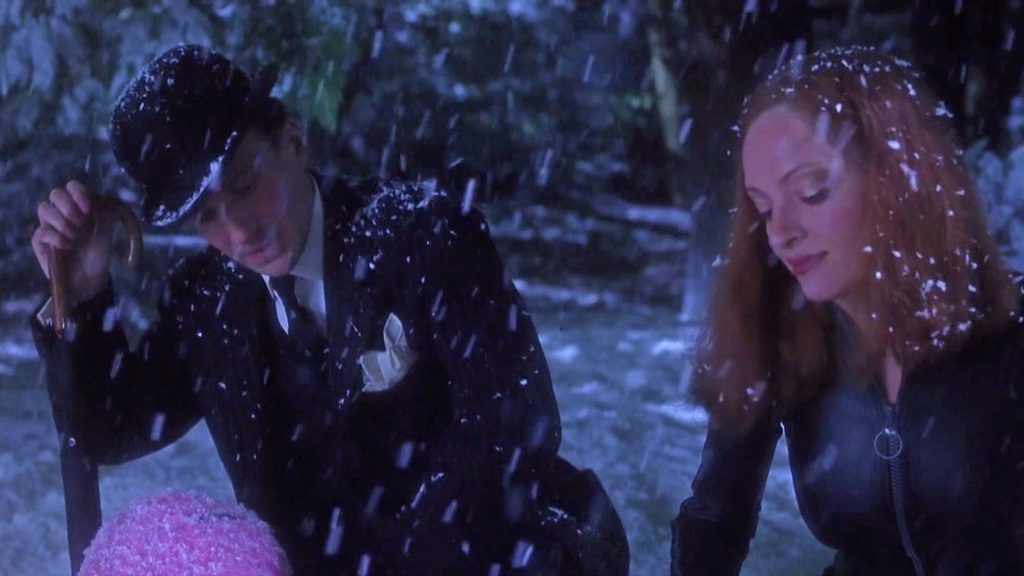