1. Large shoulders: Timothy Dalton’s suits in The Living Daylights come from a variety of sources, some fitting better than others. A few of the suits suffer from too large shoulders, a common characteristic of the late 1980s “power suit.” Not all of Dalton’s suits have shoulders like this, and the ones that don’t are more flattering.

Some of the details of Dalton’s suits defy the day’s trends, such double vents (no vent was popular) and flapped pockets (jetted pockets dominated fashion). A few of the jackets have a low button stance, but for the most part they are rather classic. Though the clothes are off the pegs, it appears that costume designer tried to find the most classic English style she could and wasn’t interested in dressing Dalton fashionably. 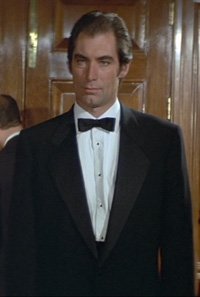 1. Large shoulders: These then fashionable suits have strong shoulders that build up and out. Again, it’s part of the late 1980s “power suit” look.

2. Full cut: The suits have a lot of extra room throughout the body, but they are not sack suits. They still have shape, just with a lot of extra cloth everywhere. A full-cut suit should still be neatly tailored and be clean across the back, but Dalton’s suits look a little sloppy.

4. Low gorge: The gorge is where the lapel and collar meet. In the mid 1980s the gorge lowered, which shortens the lapel and makes the wearer look shorter. A low gorge was classically worn by very tall men, like Gary Cooper, to great effect. But Dalton’s gorge is not only low but on a steep angle. That’s what really dates it.

5. Wide Lapels: The low gorge is only emphasized by wide lapels, but because the lapels start lower they aren’t as noticeably wide as what Roger Moore wore. The shape of the lapels makes them look more designed and stuck on rather than a natural part of the jacket.

Dalton’s suits in Licence to Kill go as far into fashion as they can while still appearing like business suits. Suits like these were what some of the flashier business people in the late 1980s and early 1990s wore, though power ties were popular for them. Since Dalton isn’t wearing the suits in a business environment he didn’t wear a tie. Lighter-coloured suits like light grey or beige would have better fit the setting than the charcoal and navy that Dalton wore, which look out of place far from the city and without a tie.

For a classic example of a full-cut suit with built-up shoulders, see Cary Grant’s suit in North By Northwest. The cut was very flattering, but also neatly tailored despite the fullness. Full-cut does not have to look like a suit that’s too large. The 1930’s drape cut was one example of a successful full cut, and it developed in reaction to the close-fitting suits that came before. It had large shoulders and a full chest with a nipped waist to exaggerate the V-shape of a man’s torso. Another classic full cut suit is the American sack suit, that lacks shape in the front. But even a proper sack suit will not have the bagginess of a late 1980s suit.

And for some odd reason, small shirt collars were fashionable to wear with the oversized suits. That exaggerate’s the suit’s large fit, and the lack of balance is very unflattering to the face.

The Case for the Vented Dinner Jacket