The Oxford Dictionaries defines the phrase as “smartly dressed”, but James Bond is literally “suited and booted” on many occasions when he pairs an elegant pair of boots with a suit.

Boots with suits are a fashion that that many shy away from, often because they think boots are inappropriate or not formal enough with suits. The height of one’s footwear ultimately has less of an importance when determining what it can be worn with than other factors have. James Bond occasionally wears boots with suits, following a long history of what many people now think is an unconventional style. Boots are more commonly accepted with sports coats, and for that reason this article is focused on boots with suits rather than boots with suits and sports coats.

Before the oxford shoe became the standard for formal menswear in the early 20th century, men commonly wore boots with lounge suits and more formal manners of dress. The phrase “suited and booted” comes from this era, when a man had to wear boots to be smartly dressed. A popular style was the balmoral boot, which had closed-lacing like an oxford. The boot has a seam that runs parallel to the ground that divides the shoe into upper and lower halves. The upper half includes the lacing while the bottom half includes the toe, heel and everything between. Though the balmoral boot is a lace-up boot, older but similar styles include boots that fasten with buttons or snaps/poppers instead of laces.

James Bond does not wear these formal, old-fashioned boot styles with his suits. When James Bond started wearing boots with his suits in the 1960s, he wears styles that originated as sporty boots. These sporty styles are transformed into more formal designs with sleek and elegant lasts, dressy toe styles, 270° welting and slim soles. When the top of a dressy boot is covered by one’s trousers when standing, a dress boot looks almost the same as a more ordinary dress shoe.

James Bond first wears boots with his suits in Goldfinger in 1964. The popular style of boot at the time was the Chelsea boot, a tall ankle boot with elastic panels on the sides to allow the foot to fit though. It’s a variation on the Jodhpur boot, an equestrian boot that fastens with a strap and buckle.

James Bond’s elastic boots in the 1960s are shorter than the Chelsea boot. While the Chelsea extends a few inches above the ankle, the tops of Bond’s ankle boots sit just at the top of the ankle joint like a shorter chukka boot does. A boot of their height is sometimes called a “bootie”. The lower height makes the boot easy to get on and off quickly, since Bond may need to put on or remove his boots at a moment’s notice. A similar boot appears in Thunderball with the brown suit and light grey suit.

The elastic bootie is an update of the black casual shoes/moccasins (loafers) that Bond’s creator Ian Fleming specified the character to wear in his novels. In the On Her Majesty’s Secret Service novel, it is mentioned that Bond “abhorred shoe-laces”, hence why he wears casual shoes with his dark blue suits. The elastic bootie may not be a moccasin, but it avoids the laces that the original Bond did not like.

Bond’s black elastic booties in Goldfinger and Thunderball are like short Chelsea boots in that they have elastic panels on the sides. The booties are made of two pieces: one over the toe and vamp and another that makes up the quarters and sits overs the instep. He wears these booties with his dark brown striped suit at Fort Knox as well as with his black sneaking-around outfit when he ends up on the laser table.

With his grey flannel suit in Thunderball, Bond wears a style of bootie made of three pieces: one on the toe and vamp and two for the two quarters on each side. The vamp sits on top of the quarters and is connected under the vamp and across the instep with a piece of elastic. This type of bootie conceals the elastic for an elegant look. The black boot in Thunderball has a plain toe.

The chukka boot is one of the most versatile styles of boots, which originated for the game of polo. It is an ankle-height boot, with height ranging from the top to the ankle to an inch or two higher, but it is shorter than Chelsea and Jodhpur boots. It has derby-style open lacing and laces up with two or three pairs of eyelets.

The first time Bond wears chukka boots with a suit is in Casino Royale, and they’re worn with a sporty navy linen suit to a cricket match, a most fitting setting for chukka boots. The scenes outside at the cricket match were cut from the final film, with only the scene in the outfit being Bond’s first kill in the toilet. These boots are made of snuff (light brown) suede.

At the end of Casino Royale with his striped navy three-piece suit, Bond wears black calf two-eyelet chukka boots in the “Romsey” model from John Lobb. When hidden under the suit trousers, these boots are hardly different from elegant two-eyelet derby shoes.

Chukka boots return with a grey pick-and-pick (sharkskin) suit at the start of Skyfall to give his feet and ankles more support than his regular shoes. Bond wears black calf chukka boots in the “Tetbury” model from Crockett & Jones. These boots are made on an elegant chiselled last with Dainite studded rubber soles and could be mistaken for derby shoes when the trousers are covering the top of boots. Though chukka boots are a step in formality below derby shoes, they look the part with the dressy grey suit because of the last, the soles and the colour. Polished black calf can help a less-formal-than-ideal style of footwear look more appropriate with a suit.

Like the elastic boot, the strap boot avoids the laces that the literary Bond abhorred but provides a more secure means of fastening than elastic. Bond’s first strap boots appeared in Diamonds Are Forever, when he wears a boot that resembles a chukka boot but secures with a strap instead of laces. This boot is made by John Lobb Ltd. of St. James’s, London and resembles a chukka boot but has a strap instead of lacing. Lobb calls this a “Strap Hilo Boot”, while “Hilo Boot” is their name for a chukka boot. The height of this boot is just above the ankle.

Connery wears this strap chukka boot in black suede with his light grey suit when riding a dirt bike and in chestnut brown calf with his cream linen and silk suit and pink tie for his encounter with Bambi and Thumper. This is the sportiest boot that Bond has worn with a suit and is better suited for the cream suit than it is for the grey suit. Connery also wears the brown boots with his brown checked tweed jacket that he also wears in Diamonds Are Forever, where the boots are most at home.

In Spectre, Bond wears the Crockett & Jones “Camberley” double monk-strap boots with a black herringbone three-piece suit to a funeral in Rome. The boot is part of a disguise so Bond can fit in amongst Italian gangsters, and though the boot is flashy its style is thoroughly British. This boot fastens like a monk shoe, with straps extending from the inner quarter that fasten to buckles attached to the outer quarter over the front of the shoe. Both quarters sit over the vamp and tongue. This differs from the sportier Jodhpur boot, where the vamp lies over the quarters and a strap loops around the back of the shoe. This boot is shorter than a Jodhpur boot and around the height of a taller chukka boot. Bond’s double-monk boot looks just like an elegant monk shoe when it is hidden under the trousers due to its elegant chiselled last and slim Dainite sole. 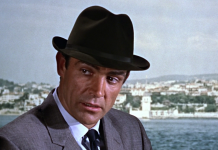