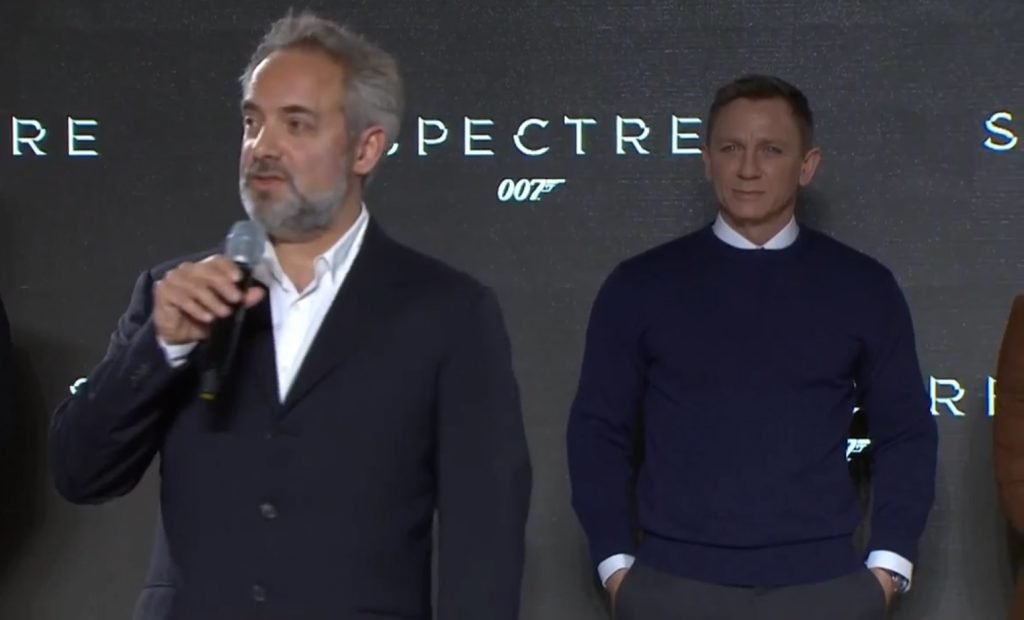 At a press conference yesterday morning, Bond 24 was christened Spectre, and Skyfall’s costume designer Jany Temime was confirmed to be returning. So what did Daniel Craig wear to this press conference? He dressed down elegantly in a jumper, grey wool trousers and a shirt and tie. Thanks to James Bond Lifestyle, the round-neck jumper is identified as the “Oxford” model from N.Peal, the same one that he wears in Skyfall. But it’s in a different colour: a deep royal blue that flatters Daniel Craig’s warm spring complexion. Under the jumper, Craig wore a white shirt with a narrow collar—presumably a point collar but it could possibly be a tab collar—and a navy tie. V-neck jumpers typically work better with a tie than round-neck jumpers do since the V-neck leaves a space for the tie. The round neck jumper awkwardly sits over the tie knot. On the other hand, a crew-neck jumper over a tie looks like something one would wear when removing a jacket after returning home from work. And that’s not necessarily a bad thing; it shows an unstudied elegance. Craig allowed shirt cuff to show beyond the jumper’s sleeves.

Craig wore grey wool flat-front trousers with turn-ups and Crockett & Jones Molton chukka boots (again, identified by James Bond Lifestyle) with the jumper. The Molton is a three-eyelet chukka with rubber soles sold at Barneys New York. Craig’s boots were black suede, an unusual combination of colour and material. Black is the dressiest colour for footwear whilst suede is a rather informal material. Black looks good when it’s well-shined leather, and in suede it looses that characteristic whilst lacking the interest that the brown colour can give suede. Black suede looks very dull and flat. However, the black goes with the grey and blue in the outfit whilst suede chukka boots match the casual look of outfit. Black suede is very difficult to pull off due to its unorthodox nature, yet Craig makes it work.

Daniel Craig’s outfit certainly looked elegant, but was it appropriate for a grand announcement of a new Bond film? Does it give insight to what he will wear in Spectre? Perhaps not. Craig wore a suit and tie at the press conferences announcing his first three Bond films, though only at the Quantum of Solace press conference did Craig wear an outfit from the upcoming film (the charcoal suit he wears in the London scenes). The Spectre press conference certainly looks like a more spontaneous affair than the previous press conferences, not only in the way Daniel Craig is dressed but also in the way the other actors are dressed. Nobody appears to be wearing costume. 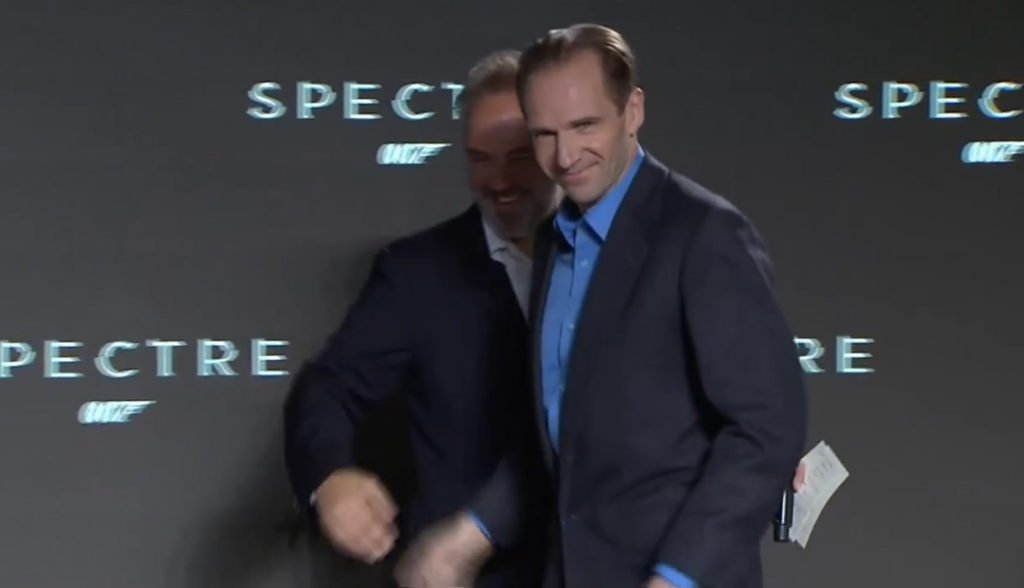 Ralph Fiennes, who plays M in Spectre, wore a beautiful charcoal birdseye suit with an azure blue shirt. The suit jacket is a button two with jetted pockets and no vents, and the trousers have forward pleats and turn-ups and are held up with braces that button on the outside of the waistband. However, Fiennes made the mistake of fastening the bottom button of the jacket instead of the top. The suit jacket has a fairly soft construction for what is most likely a bespoke English suit, judging by the full chest, natural shoulders and roped sleeve heads, and the lapel had rolled over the top button down to the bottom button. This was most likely the result of a poor pressing because no English tailor would design a suit to button so low as to show the trouser waistband above the jacket’s button. Fiennes’ wore shoes with plain toe and were likely chelsea boots, though they were mostly hidden by the trousers. Fiennes’ suit is also not one that should be worn without a tie. That suit and the occasion warranted a tie.

Spectre‘s Director Sam Mendes wore a sloppy-looking suit with both the sleeves and the trousers too long. It was as if he borrowed a suit for the event. The jacket has three buttons and he fastened the bottom two buttons. 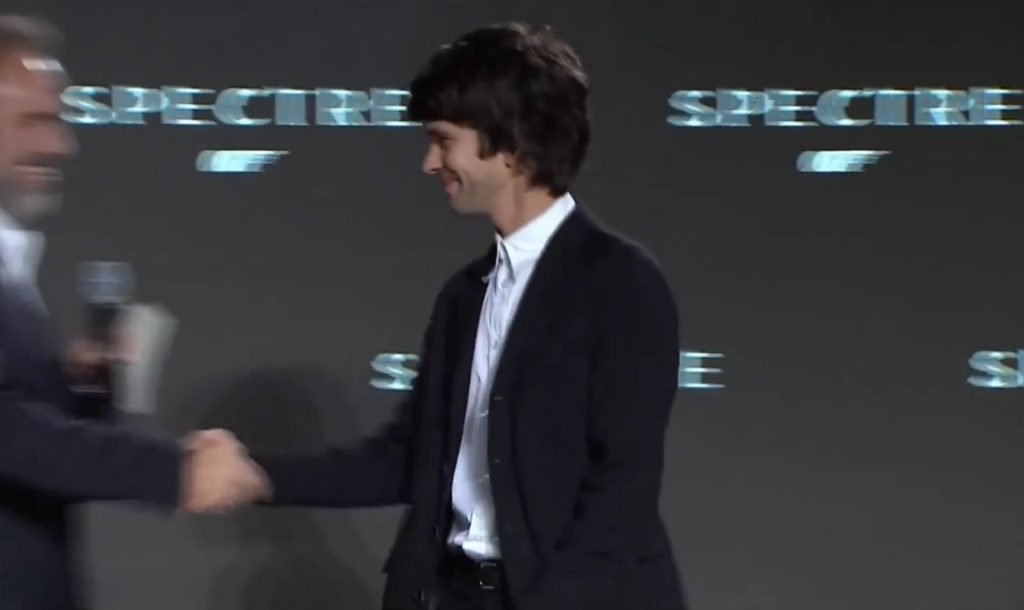 Ben Whishaw, who plays Q in Spectre, wore one of the least attractive outfits of the men at the event. He wore a black, button four unstructured jacket, baggy black trousers that bunch at the waist, black derby shoes and white shirt with the collar buttoned but no tie. He was probably inspired by the Twelfth Doctor to button his collar without a tie, but it is nevertheless an unattractive look. Rory Kinnear, who plays Tanner, dressed similarly to Daniel Craig in a jumper, though his outfit isn’t quite as refined. 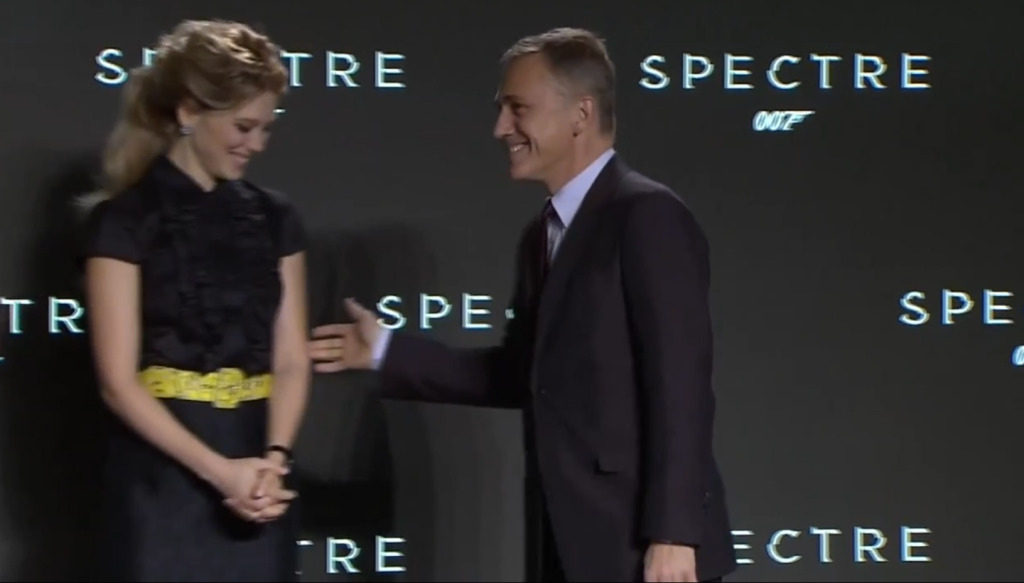 Christoph Waltz, who plays Franz Oberhauser, was perhaps the best-dressed man at the Spectre press conference in a outfit of a well-fitting suit and tie that’s appropriate for the grand occasion. The suit is a tone-on-tone brown Glen Urquhart check and has a button two jacket with flapped pockets and a single vent with flat front and plain-hemmed trousers. He unfortunately had the right pocket flap tucked whilst he left pocket flap out. He wore it with a white shirt that had an edge-stitched point collar and a burgundy tie with a brown grid and white dots. He knotted the tie in a windsor knot. His shoes are light brown cap-toe oxfords, a flashy and fashionable, yet stylish, choice.