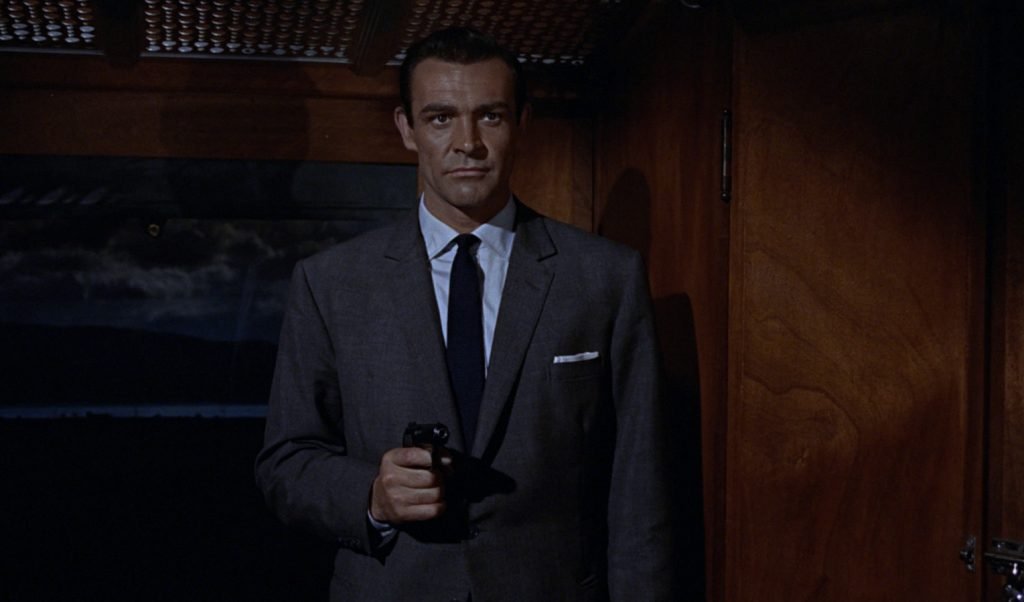 In From Russia With Love, James Bond uses the named David Somerset for his international travel on the Orient Express. For the trip he wears a dark grey suit in Connery Bond’s typical button two cut by Anthony Sinclair. The suit is not solid grey but it’s a mid-grey and charcoal grey pick-and-pick (also known as sharkskin), which it woven in an even twill weave and alternates the yarns dark and light in both the warp and weft of the cloth. It has hints of blue and brown in it, which are mottled in the grey yarns.

The suit coat has a full, draped chest and narrow notched lapels that gently roll down to the low top button. The shoulders are natural with roped sleeve heads. The coat has four-button cuffs, jetted pockets and no vents at the back. The sleek vent-less look may have been chosen for the helicopter chase scene so that the back of the coat wouldn’t be flapping about with all the running around. In the similar and inspirational crop dusting scene in North By Northwest, Cary Grant also wears a non-vented suit. 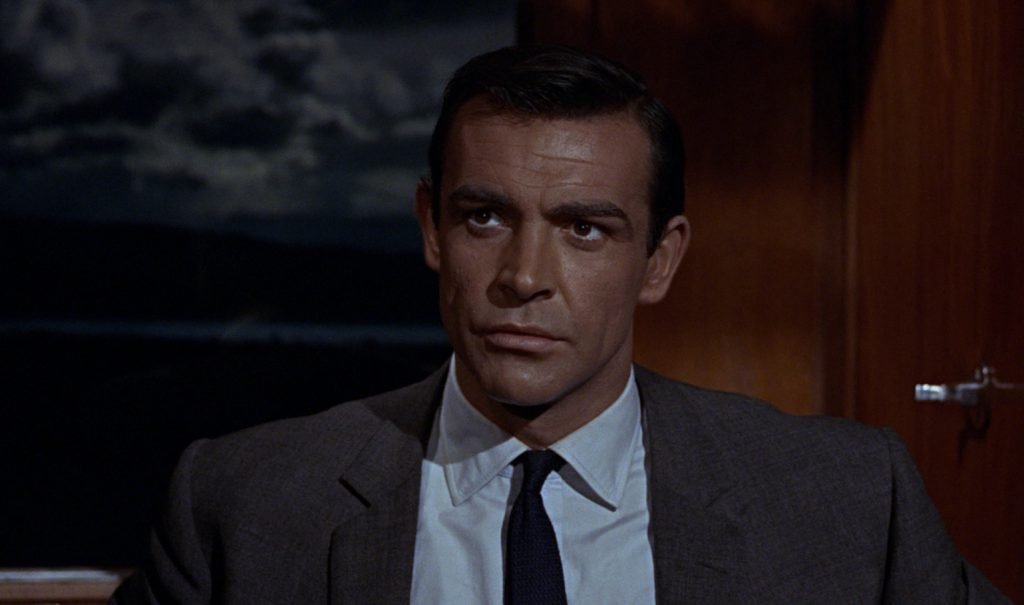 The trousers have Connery’s typical double forward pleats, side button-tabs and tapered legs with turn-ups. The pale blue poplin shirt is made by Turnbull & Asser and features their classic spread collar, a front placket and two-button turnback cuffs. Connery wears his typical navy blue grenadine tie, which is tied in a four-in-hand knot, and folded white linen pocket square typical of the early Bond film. His shoes are black three-eyelet derbys with a cap-toe design. 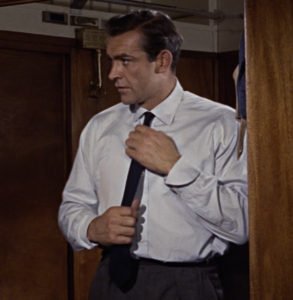 When we first see James Bond in this suit he is carrying a black and white herringbone overcoat. All we can see of this coat besides the close-up shot of the cloth is that it’s about knee-length and that is has a fly front, peaked lapels and a breast pocket welt. The fly front means that it is a single-breasted coat, despite having peaked lapels. The James Bond 007 Facebook page posted a behind-the scenes shot of Connery wearing this coat, which confirms the style of the coat that I was able to decipher from the little we see of the coat in the film. 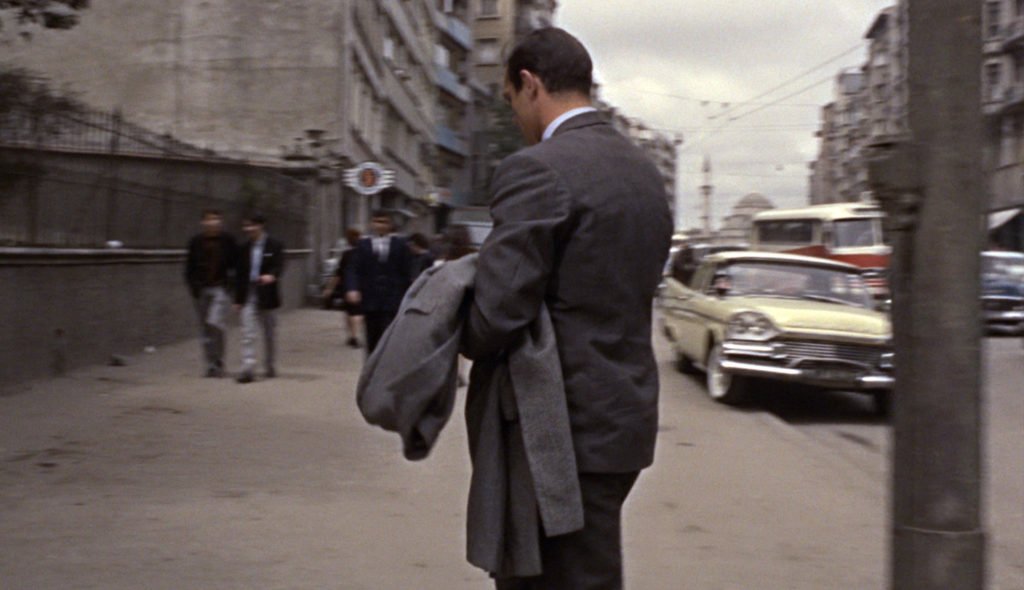 See the cloth of both the coat and the suit jacket in the image below. 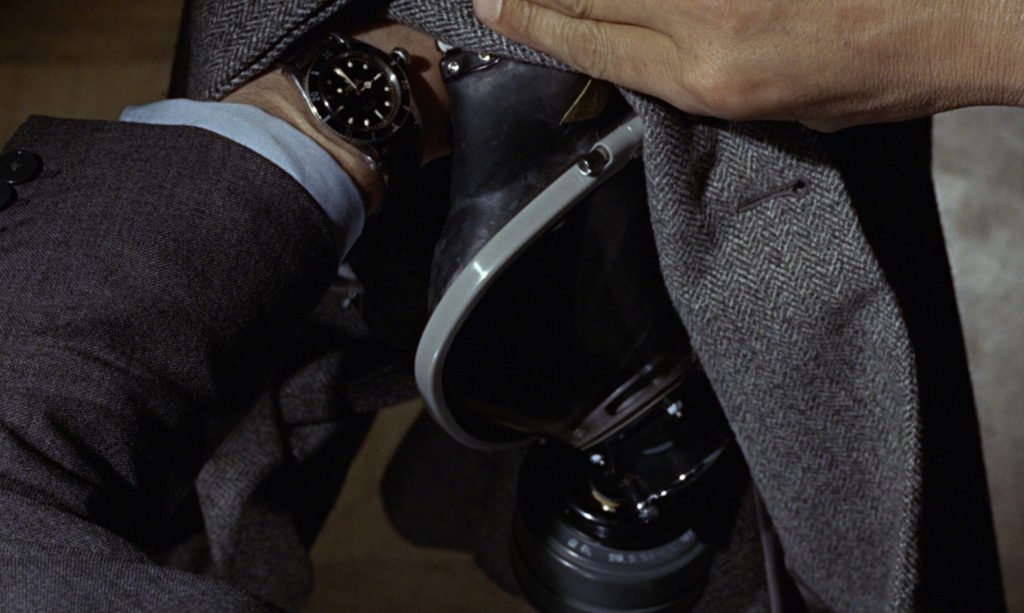