Though solid black may currently be the most popular suit colour in the world, it has never been a staple of James Bond’s wardrobe. Like most of the world’s best-dressed men, James Bond rarely wears solid black suits. Black is a serious colour, a formal colour and a dull, flat colour. In recent years the solid black suit has become acceptable for a business suit in all but the most conservative environments, but traditionally only blue and grey (and sometimes brown) are the suit colours worn for business. Because black is such a formal colour, it is generally saved for dinner jackets, evening tailcoats, morning coats and black lounge. So what is the black suit good for?

The black suit is what bad guys wear. Putting a character in a black suit is an easy way to label him as a bad guy because a black suit often implies questionable taste. This only applies to male characters; black suits are more widely accepted on women just as black dresses are. Though Bond villains often have exceptional taste and thus don’t dress in black lounge suits, many of them wear a lot of black. Kananga wears a black leisure suit in Live and Let Die, Karl Stromberg dresses in an all-black outfit in The Spy Who Loved Me, Hugo Drax wears a black nehru suit in Moonraker, Max Zorin wears a black riding suit and a black blazer in A View to a Kill, and Elliot Carver wears a black Mao suit in Tomorrow Never Dies. Le Chiffre wears a black shirt with his black velvet dinner jacket in Casino Royale (2006) to add more black to an outfit that tradionally includes a lot of black already. The average black suiting is a worsted wool woven in a plain weave, which accentuates how dull and flat black can be. Bond’s black suit in Diamonds Are Forever is likely woven in a twill weave to give it more depth. A twill worsted has more sheen than a plain weave worsted, but worsted wool will never have a particularly bold sheen. Bond’s black worsted suit in Spectre has more interest than a standard black suit due to its large herringbone weave, which gives it a subtle self-stripe effect by causing the light to reflect from it in different directions. Dinner suits, morning coats and evening tailcoats are often made from black worsted wools that are woven in a barathea weave, which is a hopsack twill weave. This fancy weave has more depth than standard plain weave and twill worsteds, but it is usually saved for these more formal garments because it is too formal of a cloth for a standard lounge suit.

The black suit from the James Bond dummy in The Man with the Golden Gun breaks away from the standard black worsted by instead being made in a mohair blend. A black mohair and wool blend in a plain weave gives the suit a lot of sheen, which adds life to the ordinarily dull black suit. The black mohair suit is too flashy for a funeral, but it’s makes a decent suit for nights out. Even though the black suit may not be traditional for business, it can be appropriately worn for such as to a fancy dinner, the theatre or the opera. The sheen of mohair is almost necessary for a suit worn for this purpose because it gives black a more luxurious and less funereal look. James Bond, however, prefers suits in more sophisticated dark colours that black in the evening, such as marine blue, charcoal and midnight blue. Midnight blue is a blue so dark that it looks black under artificial lighting, but it has more depth than black. It’s the depth makes midnight blue a more sophisticated choice than black.

Though the black suit can be good for funerals and evenings out, Bond shows that the black suit is never a necessity and that other colours are better choice for most suit-wearing occasions. Grey and blue suits are infinitely more useful and stylish, not to mention more flattering on those with lighter complexions. 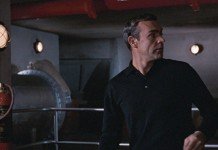