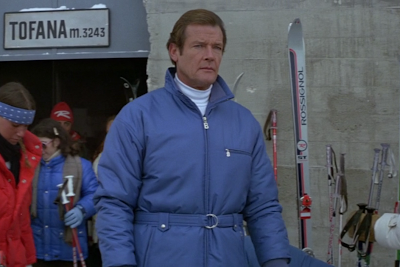 In For Your Eyes Only, Bond goes skiing in Cortina d’Ampezzo dressed in a ski suit from Bogner. The Bogner clothing brand was started by skiier Willy Bogner, Sr., whose son Willy Bogner, Jr. took over the company after his death in 1977. Bogner, Jr., who is also an accomplished skiier, was the cameraman who shot the complex ski sequences in For Your Eyes Only and in other Bond films. “B” logo of the zip fasteners are shown in many close-up shots to promote the brand. Not only does Bond wear Bogner clothes but so do some of the bad guys. Bogner’s skiwear is well-made and timeless. 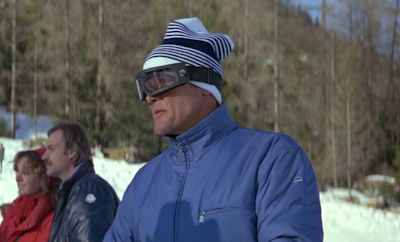 Bond’s Bogner light blue, zip-front ski jacket is hip-length and worn with a D-ring belt. There are three pockets: one horizontally across the chest on the left size, and two slash pockets at the hips, all closing with zip fasteners. The cuffs are elasticised. The back is one piece and darted at each shoulder. Apart from the “B” zip fastensers, there is an additional Bogner logo on the upper left sleeve that spells out the name under a hemicycle. 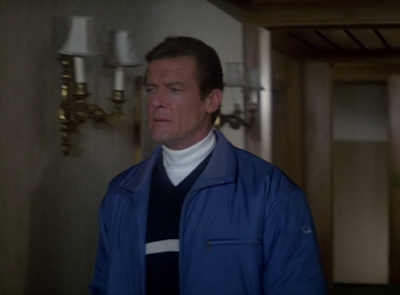 Under the jacket Bond wears two knit tops. The first is a navy V-neck jumper with a white stripe across the chest and two white stripes on each sleeve. Around the v-neck opening and down the outside of each sleeve is a knitted cable. Under that Bond wears a thinner white polo neck jumper. Bond’s Bogner navy ski trousers have a narrow leg with a zip-fastening at the bottom. The zip is on the outside of the leg and a Bogner hemicycle logo is on the inside. The trousers are worn over the dark and light blue two-tone boots, which have a tan sole. The navy leather gloves are also by Bogner and close with a “B” zip fastener. Bond wears a second, insulating pair of gloves under the leather gloves. A white wool tuque, or ski hat, with navy stripes tops off the outfit in the skiing scenes. 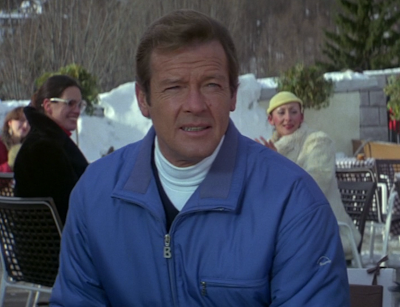 A lot including the jacket, polo neck and V-neck jumpers, gloves and hat was auctioned at Christie’s in South Kensington on 12 December 2011 for £2,585. The white polo neck jumper is listed as having a zip at the neck, which means that it wasn’t the same one as used in the film.