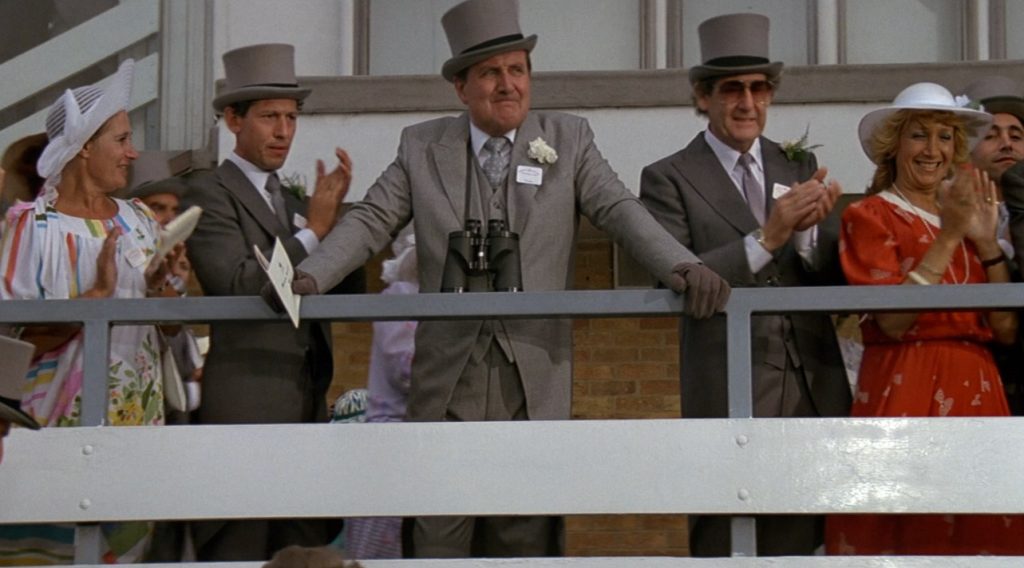 In A View to a Kill, Sir Godfrey Tibbett, like Bond, wears the morning suit variation of morning dress where the morning coat, waistcoat and trousers match each other. Tibbett is played by Patrick Macnee, who is best-known for playing the dandy John Steed in The Avengers, and Macnee still looks effortlessly stylish as Tibbett. Tibbett’s suit is light grey, woven of grey and white yarns, and it could possibly be pick-and-pick. Light grey is the classic shade for the morning suit, more so than the much darker grey that Bond’s morning suit is. The morning suit is less formal than non-matching morning dress, and it’s best worn for less formal occasions. Royal Ascot is thus the ideal place to wear a morning suit.

The morning suit’s coat is cut and detailed the same as the more traditional black morning coat. It is a body coat with a waist seam for a close fit, and it is cut away in the front skirt below the button and curves around to the tails in back. Tibbett’s morning coat has the traditional single button link closure and peaked lapels, and it is cut with a clean chest and straight shoulders. It has three buttons on the cuffs and a breast pocket. The single-breasted waistcoat has six buttons—the bottom is left open—and no lapels. The buttons on the morning coat and the waistcoat are polished grey horn.

Tibbett’s white shirt is a regular formal shirt with a spread collar and—like on M’s shirt with morning dress—button cuffs. Button cuffs don’t belong with morning dress, and some would argue that attached soft collars don’t belong with morning dress either. At least Tibbett’s wider spread collar is more formal than the narrower point collars that M and Q wear. Tibbett a grey and white printed spitalfields tie, and it is tied in a windsor knot. He wears the same light grey felt top hat with a black ribbon and white carnation in his lapel that the other men wear, but his brown, unlined suede gloves are an interesting change.