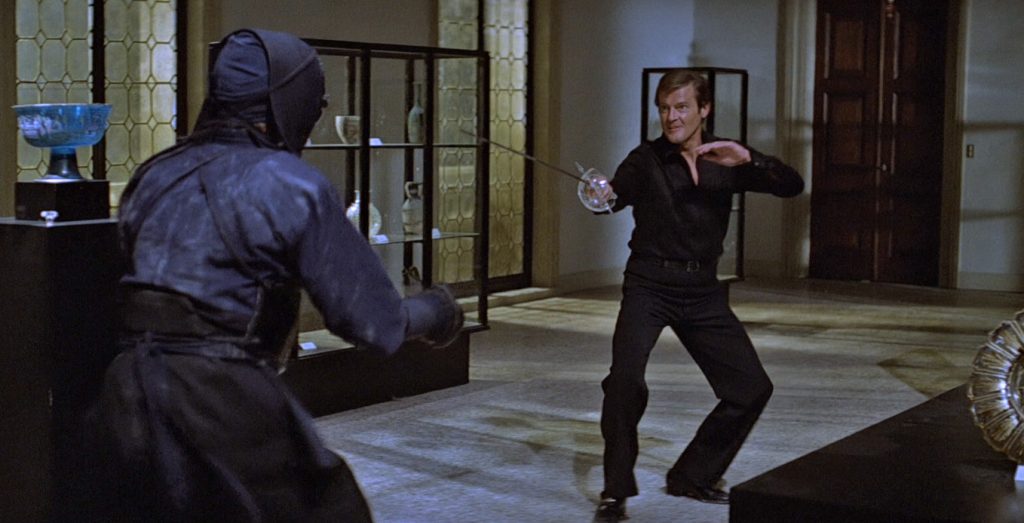 Roger Moore’s trousers in his 1970s James Bond films are notorious for their flared or bell-bottom legs. Though the flares were most exaggerated in The Spy Who Loved Me and Moonraker, Roger Moore will forever be remembered for these trousers. That is unfortunate because Moore’s trousers have some interesting details beyond the rather pitiful flares. Moore’s suit trousers, odd trousers and casual trousers in the 1970s were all very similar, though in Live and Let Die and The Man with the Golden Gun they were made by Mayfair tailor Cyril Castle, and in The Spy Who Loved Me and Moonraker they were made by Roman tailor Angelo Roma. Though most today would say the trousers are ruined by the flared legs, there are many interesting details at the top of the trousers.

Along with the flared legs, some may also say that the trouser waist sits too high. A higher waist gives Moore the illusion of being taller, and it gives his actual waist the definition it needs. When the trousers are worn with a jacket, the higher waist keeps the shirt from being visible beneath the fastened jacket button and creates an overall sleeker silhouette.

Cyril Castle’s trousers have subtly flared legs, which would now be called “boot-cut.” They taped gently to the knee and gently flare out below the knee. If there could be an elegant example of flared mens trousers, this would be it. Castle took the fashion trend and did the best he could with it. The hems are angled to cover most of the shoes.

In Live and Let Die the suit trousers are made with “DAKS top” button-tab side adjusters with three buttons, whilst the odd trousers and casual trousers are worn with belts. The suit trousers also have an extended waistband with a hidden clasp closure. Both the waistband extension and the side tabs have a rectangular shape with rounded corners. In The Man with the Golden Gun, all of Roger Moore’s trousers that can be seen are worn with belts. Some of the casual trousers may have been made by someone other than Castle, but they are all made without side pockets.

The tops of Castle’s trousers have a unique style. The front has long darts of approximately four to five inches sewn down the middle of either side. It’s effectively like having small pleats, but since they’re sewn down the trousers have the cleaner look of flat fronts. Castle obviously believed that trousers without pleats still needed to have shape in the front.

The back of the Cyril Castle trousers has a button through pocket and a pair of darts on either side. Ordinarily, darts on the back of trousers go from the bottom of the waistband down to the top of the pockets, but on Castle’s trousers the inner darts extend further through the pockets to give more fullness to the seat. Castle offsets those darts slightly to the outside of the centre of the pocket so not to interfere with the buttons. The second dart on either side goes from the bottom of the waistband to the outer corner of the pocket. Placing the darts to the side of the pockets rather than spacing them over the middle of the pockets—where pairs of rear are typically placed—throws the fullness toward the hips where it may be more useful for Moore’s body. Through his unique method of using darts, Cyril Castle is able to give Moore the fullness through the seat, hips and thighs that he needs without using pleats.

The tops of Angelo Roma trousers in The Spy Who Loved Me and Moonraker aren’t seen very much since they are usually hidden under jackets and jumpers. Like Cyril Castle, Angelo made suit trousers, odd trousers and casual trousers for the Bond films he worked on. They’re cut with wider flared legs than the Castle trousers are, though from the knee up they still have a very classic look. The hems are angled to cover most of the shoes.

Like the Castle trousers, the Angelo trousers are also made without side pockets. However, they have nothing to make up for the lack of pockets. Some of the trousers, like the black casual trousers in Moonraker, have no rear pockets at all. The trousers chose clean lines over utility, which is an approach women’s clothes often follow. The lack of rear pockets highlights the shape of the buttocks instead of camouflaging it with pockets. The trousers on the dinner suit for The Spy Who Loved Me go the traditional route of having a rear jetted pocket only on the right.

The front of the Angelo trousers is plain without darts. Like most better flat front trousers, these trousers are made with a pair of darts on either side in the rear. The darts extend from the bottom of the waistband to where the top of the rear pockets would be, and the darts would be spaced equidistant from the centre of each pocket. This is how two darts on each side of the rear of men’s trousers are typically done. The suit trousers and odd trousers in The Spy Who Loved Me are made with an squared extended waistband. They are neither worn without a belt nor have an adjustable waistband. They are made to exactly the right size so no assistance is needed. Such a waistband is not practical since almost everybody’s waist fluctuates a little. The casual trousers in The Spy Who Loved Me and most of the trousers in Moonraker are worn with belts.