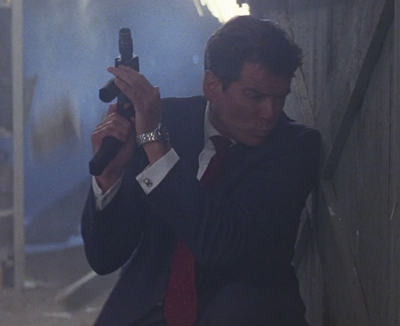 Today it is Independence Day in the United States (sorry readers in Britain), so I chose to look at a red, white and blue outfit from The World is Not Enough. 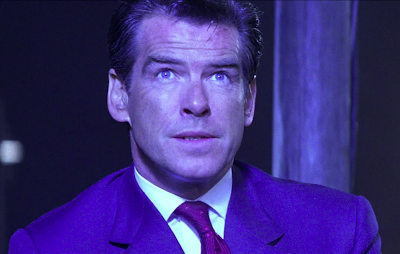 The red in the outfit comes from a Turnbull & Asser tie. The pattern consists of a yellow-centred red circle on a twill base. Since a tie is cut on the bias, a normally 45-degree twill rib will appear to run either crosswise or lengthwise. This tie is an example of the latter.

The white is a shirt from Turbull & Asser, with the usual spread collar and double cuffs. 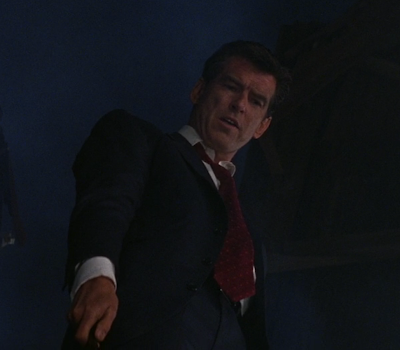 The blue is Bond’s 3-button Brioni suit. The fabric is a navy semi-solid, which costume designer Lindy Hemming seems to like on Brosnan. Since she has never put Brosnan in a solid blue lounge suit she probably feels that a rich blue would overpower his complexion. The suit coat has slanted pockets with a ticket pocket, double vents and 4-button cuffs. The darted front trousers have turn-ups and are worn with a black belt.

Bond’s black shoes are not the Church’s Presley monk as seen elsewhere in the movie but instead a lace-up brogue. The shoe might be the Church’s Chetwynd model. A lace-up is probably a better choice considering all the running and jumping involved in this scene.