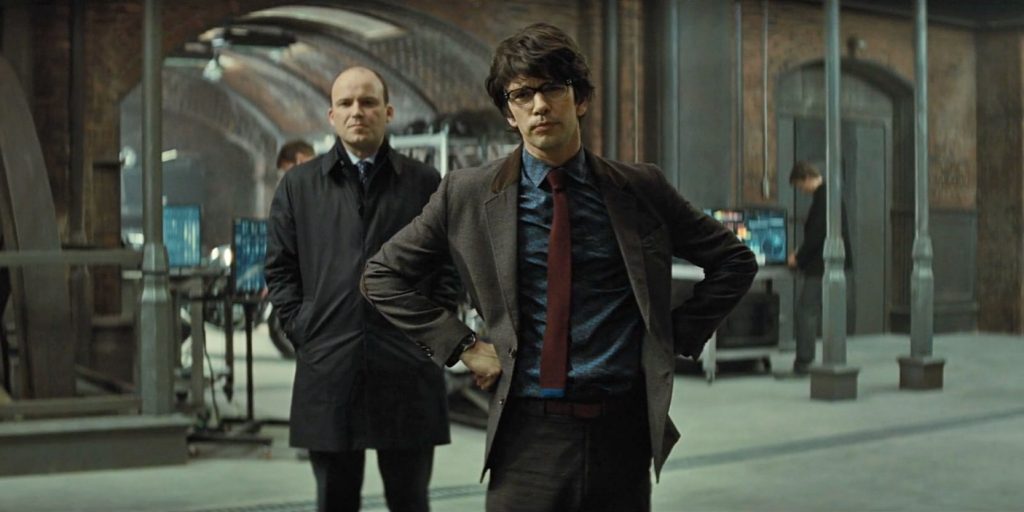 Ben Whishaw’s Q in Spectre still prefers to dress like a hipster university student rather than like a mature man, but now he has moved up to wearing a suit. His clothes show that he’s from a younger generation than Bond and Tanner are and that he wants to do things his own way. However, this look forfeits a look of authority and maturity that can be useful in Q’s important position, but his colleagues still show him respect despite the way he dresses, just as they should.

Q’s suit is from Maison Margiela, who also made Q’s black moleskin jacket in Skyfall and Blofeld’s pale grey drawstring trousers in Spectre. The suit is made of a blend of 98% wool and 2% polymide (nylon) in a semi-solid brown made up of dark and light browns, blue and red. Because the there is red and blue in the brown cloth, it has a cool tone that is flattering to Whishaw’s cool winter complexion. Such a multi-coloured suiting is reminiscent of suitings popular during the 1960s. Unlike suitings from the 1960s, this is very lightweight and does not drape so well. 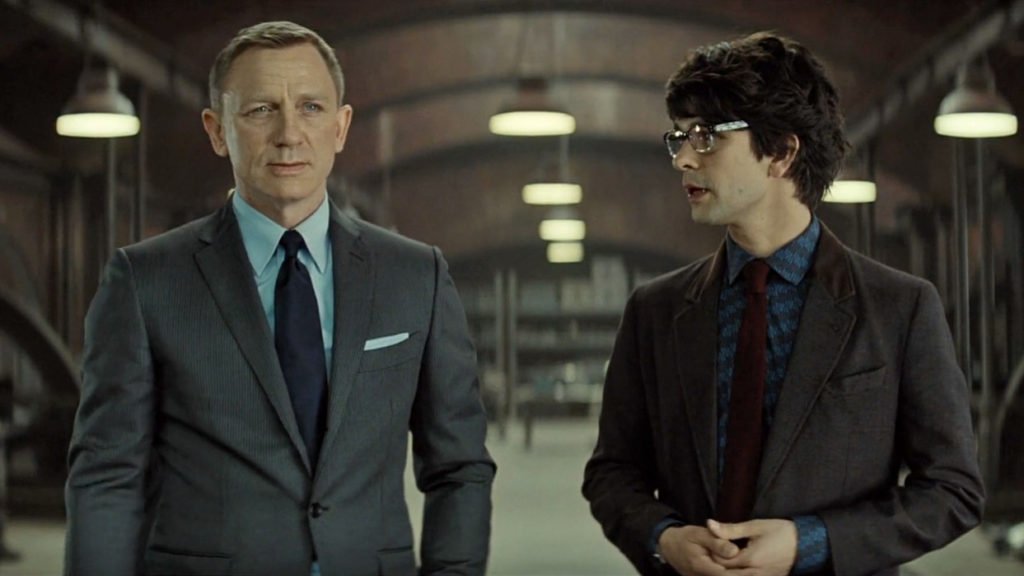 The button two suit jacket is cut with straight shoulders and a clean chest. The jacket fits slightly short on Q for a modern look, but the overall fit is difficult to judge because Q always wears it open. The armholes look low, which limit the range of motion and may be why Q wears the jacket open. The collar is brown cotton needlecord (pinwale corduroy), and there are matching brown needlecord elbow patches. Both the collar and elbow patches give the suit jacket a countrified—but also very creative—look. It’s a shame that this kind of experimentation isn’t as popular in fashion as experimenting with fit unfortunately is. The jacket is detailed with flapped patch pockets on the hips, a welt breast pocket, three buttons on the cuffs and a single vent at the rear. There are swelled edges on the lapels, collar, front edges and pocket flaps, and the centre back has a lapped seam. The suit trousers have a flat front, low rise and tunnel-style belt loops. The legs are full at the thighs but taper to a narrow hem that pools on top of the shoes, giving the trousers a sloppy look.

Poster ‘qcentric’ on AJB007 identified the suit as being from Maison Margiela. 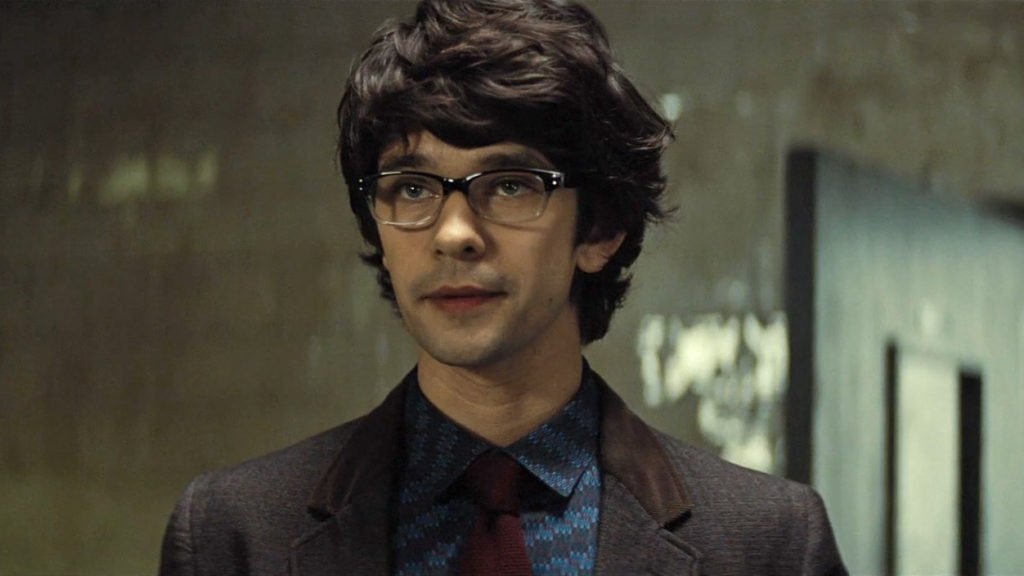 Q’s shirt from French fashion house Kenzo is called ‘Graphic Trees’, and it’s a print in steel blue, teal, dark teal and magenta on cotton. The tones of the shirt are too vivid and warm for Whishaw’s complexion, while a more traditional white or light blue shirt would both look better on him and make the outfit look more mature. The shirt has a moderate—but short—spread collar, button cuffs and a plain front. The shirt’s buttons are grey. Q’s tie is a finely knitted burgundy—possibly in silk—with a square cobalt blue hem, which coordinates with the similar colours of the shirt. Even though Q uses a four-in-hand knot to tie the knitted tie, the knot is too big for the short collar since the collar points cannot lie flat. 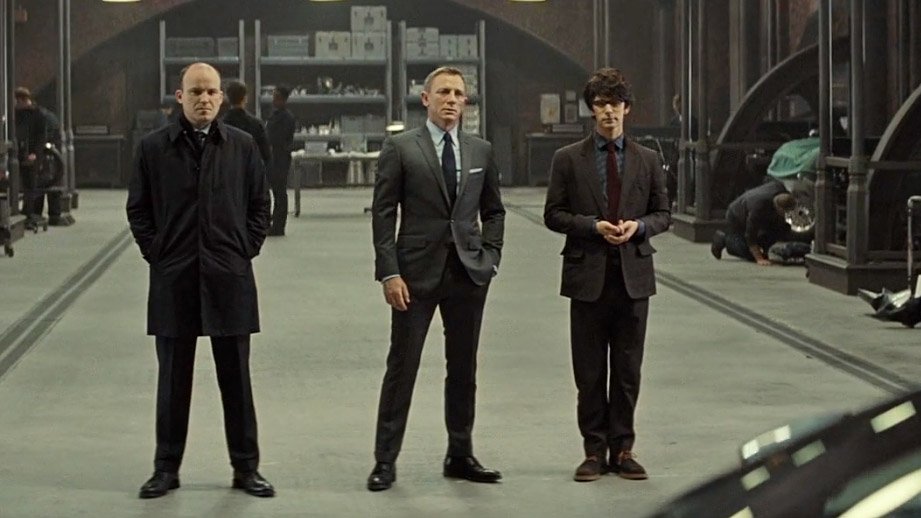 The shoes are dark brown suede full-brogue (wingtip) oxfords with light-coloured natural leather soles, storm welts and orange laces. The shoes are fitting for the casual nature of the suit, though the light soles on dark shoes are jarring. The belt is light brown leather, which complements the shoes by coordinating with the light parts of the shoes.

This outfit is an improvement over Q’s outfits in Skyfall, with two problems that could be remedied: the fit of the suit and the shirt. The suit is ready-to-wear and looks it. The suit jacket and trousers neither follow Q’s body nor drape elegantly from it, while the shirt is neither the right colour for Whishaw’s complexion nor does it look mature enough for Q’s high position. But the suit’s details are creative, and the tie and shoes pair harmoniously with the suit.