Bonisseur de La Bath says that his black dinner suit is made of alpaca, and since the cloth has a bit of a sheen it is certainly possible that it truly is alpaca. Alpaca wool is unusual for a dinner suit, though its silky and luxurious hand makes it appropriate for evening wear. However, it wears warmer than ordinary sheep’s wool, making it a rather poor choice for the hot and dry desert climate in Cairo. Mohair would have been a better choice, though “alpaca tuxedo” sounds more humourous.

The suits for OSS 117: Cairo, Nest of Spies were beautifully made for Jean Dujardin by Parisian tailor Joseph Kergoat. The dinner jacket has a traditional button one front and medium-width, satin-silk-faced peaked lapels without a buttonhole. The jacket is cut with wide, lightly-padded shoulders, gently roped sleeve heads, a full chest and a gently suppressed waist. The jacket has satin silk pocket jettings, three-button cuffs and no vent. The jacket’s buttons are black plastic. The dinner suit’s trousers have a darted front, tapered legs and a satin silk stripe down each leg. Though much of this film is modelled on Sean Connery’s Bond films from the 1960s, non-pleated trousers are inconsistent with both what Connery wears in his 1960s Bond films and what was popular in the 1950s. These trousers should have had pleats to be more accurate, though pleats were becoming very unfashionable at the time the film was made. 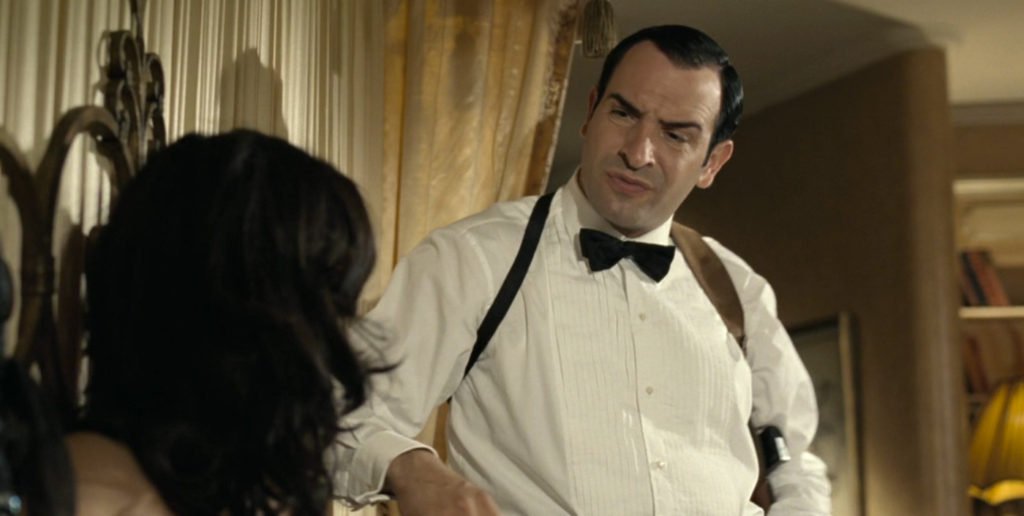 Bonisseur de La Bath wears a white dress shirt with a short spread collar, double cuffs and a pleated bib with twelve pleats on each side. The front is fastened with three mother-of-pearl studs—with regular buttons the rest of the way down below the bib—and the cuffs are fastened with matching mother-of-pearl cufflinks. With the outfit he wears a black satin silk batwing bow tie, a black satin silk cummerbund and a folded white linen handkerchief in his breast pocket.

From Tailors with Love: Craig v Cruise, with Chris Laverty