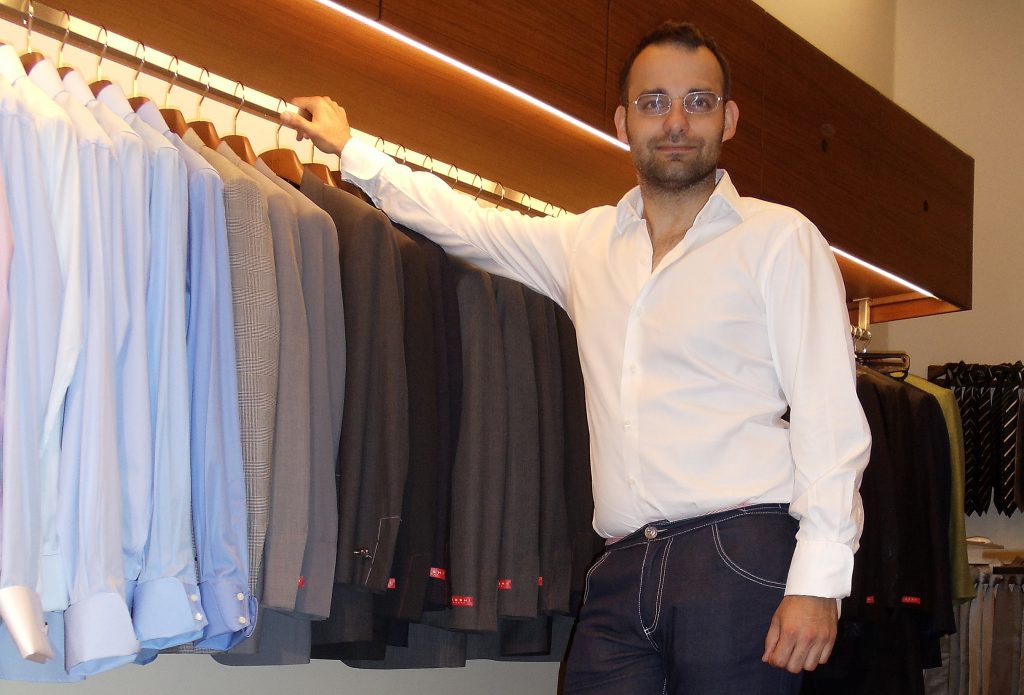 There’s a shop in Mayfair called Udeshi, run by a man named Oscar Udeshi. Oscar Udeshi started out as a banker but left that industry to open a clothing shop that combines fashion with tailoring. Mr. Udeshi is also a well-known James Bond fan and much of the clothing in his shop is Bond-inspired, from shirts with cocktail cuffs to grenadine ties to suit jackets with gauntlet cuffs. I spoke with Mr. Udeshi about the clothes he sells and his take on the clothing in the Bond films.

Matt Spaiser: How did you get started in the clothing industry?

Oscar Udeshi: The correct answer is I inherited my mother’s bottom. I couldn’t find anything that fit. I was a 38 jacket and a 40 trouser, of sorts. Also, I could never find anything the way I wanted it to be. If you went to a tailor it would fit well but it wouldn’t necessarily look very good, and if you go to a fashion house you’ll have something that might look well but doesn’t fit or isn’t comfortable. I was trying to find something that would balance the two out and is something that would look good and is comfortable and actually fits. And at the time I didn’t feel there was anything out there that would bridge that gap.

MS: When did you open the shop?

OU: Yes. Before that we sold wholesale, but with wholesale there’s a limit to how far your distribution can get. We also always had people go, I’d like this shirt but in a different fabric, or can you do this or can you do that. And why are we giving away that business? So it was the next logical progression. Very few stores would also stock the whole range.

MS: How do you like to describe your clothes?

OU: We walk the magic tightrope between fashion and tailoring. Tailoring usually, as I said earlier, the garment will fit correctly but won’t necessarily look that good. It’s a question of balancing proportion, having an eye to balance it and having the right clothing and the right look for that specific person. Whereas a tailor would make you something really that fits. Whereas with fashion you buy a suit and actually like it, and you want to come back 3 months later and say “I’d like the same thing in grey,” good luck. Or if you go to, Gucci is a good example, every time you go back there in 6 months they’ve changed the fit so it fits completely differently. I don’t know how they assume your body shape is going to change every 6 months just to fit it its clothes. And so for us it’s finding something that is comfortable but also makes you look good.

MS: Do you have suits in your shop that have different fits?

OU: Yes. We have 3 different fits and then with our made-to-measure and our bespoke you can have within reason whatever you want, but still we have a house style. We have relatively light shoulder pads, waisted but not too tight, relatively light canvas, light construction so it feels comfortable but still has some shape and isn’t a sack. For example, if you’ve ever have a Tom Ford suit on it’s almost like a suit of armour. Not a bad thing, it depends. Some people like pasta, some people like sushi. There’s no right answer. To each their own. But, we probably have a much lighter style than the average English suit on the market. We also have some completely unstructured jackets, whereas the Italians tend to have the Tom Ford “let’s stick the biggest sleeve head we can into an armhole.” Yes, lots of comfort, lots of freedom of movement but then you end up looking like a woman’s blouse with all the creases and pleats along the top shoulder line. Whereas an Englishman, that doesn’t work. I had a gentleman in here and I said to the client “What do you think of this jacket?” Why is he wearing a girl’s jacket, just because of that detail. Or for example, a Borelli shirt and one of my friends looked at it and goes “why is the buttonhole machine broken?” Oh, those are hand-made buttonholes. “They’re not consistent.” That’s the beauty of it. Eh! And again he complained about the sewing. “Why are you wearing a girl’s blouse? Why do you have creases on the shoulder?” Nothing wrong, different tastes. 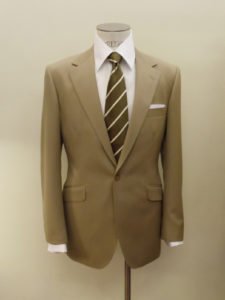 MS: What role has James Bond had in inspiring your clothes?

OU: When I was young, watching James Bond was a little bit more realistic than me learning how to fly or climbing up buildings. I’m not scared of spiders but crawling up on ceilings didn’t appeal to me and I tried flying, but that didn’t work. But chasing women, exotic locations, driving fast cars. After seeing a Bond film most women want to sleep with James Bond and most men would walk out a couple inches taller and want to be James Bond. I think one of the first films my dad took me to see was The Living Daylights, unfortunately. No, A View to a Kill. Grace Jones, yes. Won’t forget that one.

OU: Yes. Having watched all of them, having read all the books doesn’t necessarily make an expert on who’s the best Bond. I think Fleming said Connery was that milk man or that truck driver from Glasgow and really wasn’t happy about Sean Connery. It was Terence Young [director of Dr. No, From Russia WIth Love and Thunderball] who basically created the style, or the persona of James Bond. If you actually look at what Ian Fleming did, blues with blacks and cream shirts, it just sounded too much of a little bit of a dandy. And if you look at Ian Fleming in the photos at GoldenEye, with his slippers and everything, so that really doesn’t create that tough-guy image in my mind. Mind you, my world, our world, has been shaped by the perception of what a tough guy or what a man should be thanks to Bond as well. In my mind, Connery comes closest to what a James Bond should be. Timothy Dalton was a classically-trained actor who probably looked more comfortable in his Afghani costume; the clothing didn’t help. You didn’t get that tough-guy impression. Pierce Brosnan was a middle-aged businessman who had a briefcase. Roger Moore is more like a one-man comic. It was a completely different time in the 70s. And most of what he wore. There are probably intimidating photos of your parents wearing things. I know that my parents wore certain things like, “Dad, you wore a tie this wide?” “It was the fashion.” And back then if you had Sean Connery be James Bond in the 1970s, assuming he was 10 years younger, it just wouldn’t have worked. It was a different time.

MS: Even in Diamonds Are Forever his ties got much wider.

OU: He also got a lot… bigger. Considering he was supposedly a 46 inches chest with a 33 inch waist, which is basically like a spin top; it was like an inverted pyramid. To actually get something to fit him is quite difficult. So when people actually say the Conduit Cut, quite honestly on him, most things would have looked good back then. In Diamonds Are Forever he [his waist] was probably wider than his chest.

MS: What to you is the most memorable piece of Bond’s wardrobe?

OU: Initially it probably would have been like most people, I guess, the suit in Goldfinger. Now probably, as you can see from that rack over there it’s probably his shirts with the cocktail cuff. It’s different enough. It can be formal, you can dress it up or it can also be more casual. And in my mind it fits James Bond’s style ’cause, from the books at least, without having all the gadgets and having to remember cufflinks, in theory wouldn’t have to match your watch or any other jewelry you’d carry. Or your ring. It just dispenses with that, but it’s a little bit more interesting and a little bit more flair than just a normal button cuff. Back in the 60s it was also called a casino cuff or a Napoli cuff or a musketeer cuff. There was always something interesting about it. They didn’t invent it in the film, of course. I do think they did a lot to publicise it. And so probably that. I’ve also watched Thunderball one too many times and my casual shirts, short sleeve ones have a square tail with vents in the side like his. Most of the suits, most of the trousers have side adjusters. My jeans have side adjusters so I don’t have to worry about a belt. 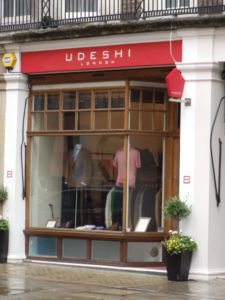 You can find more about Udeshi at udeshi.co.uk 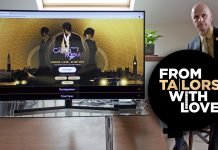 From Tailors with Love: Casino Royale at Secret Cinema and Bond Brands