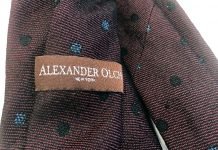 Alexander Olch and the No Time to Die Tie