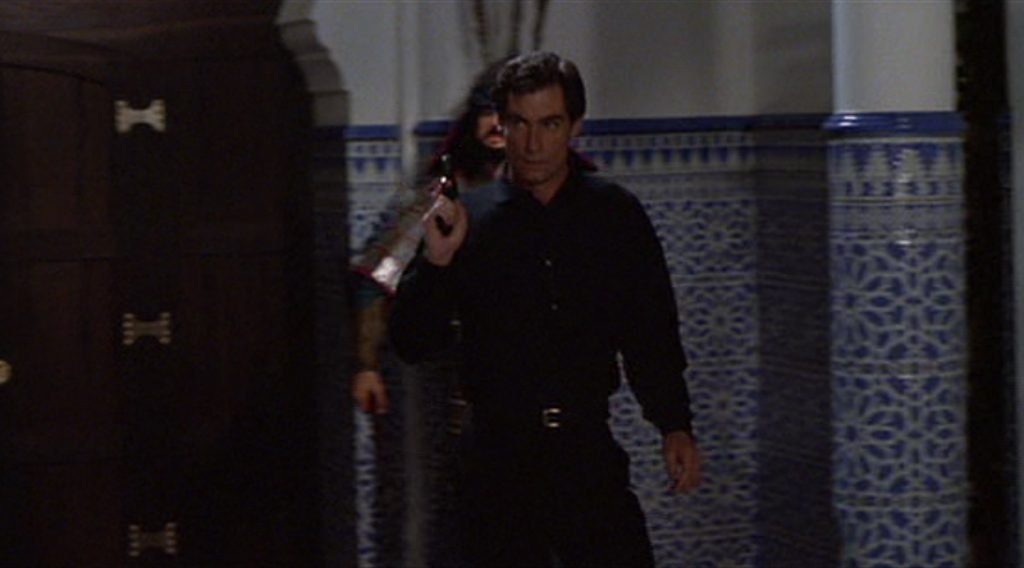 Timothy Dalton, who turned 66 last week, wears a navy and black outfit for his showdown with Brad Whitaker in The Living Daylights. Though black shoes are the default choice for a navy suit, the pairing of dark blue and black in most other situations is questionable. The textural contrast between navy cloth and black leather makes the shoe pairing work well. A shiny black silk tie against a matte navy suit can also work. However, navy cotton against black cotton clashes. Colours that are very close need a significant textural contrast to work well with each other.

Dalton’s navy knit polo-like shirt with a fold-down collar and a nine-button opening is the same shirt he wears earlier in the film under his beige blouson. The shirt looks black at first, though under bright light the blue shows and slightly contrasts with black trousers. The trousers are also the same double forward-pleat cotton chinos, but in black. Bond wears a black braided leather belt and a black trainers.

This dark outfit works well for hiding in the dark when Bond sneaks around Brad Whitaker’s lair for their final and only showdown. His clothes are not tactical gear; he’s dressed like a normal person in typical 1980s casual clothes. He’s able to walk down the street in these clothes and not attract any attention while also being prepared to take down a villain.