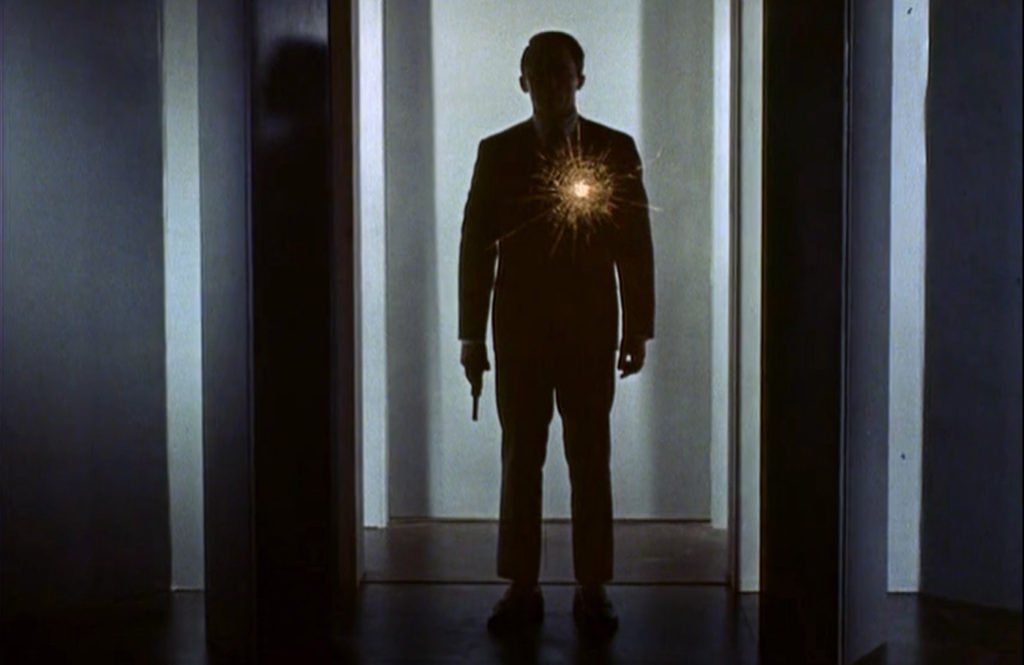 Ian Fleming’s character Napoleon Solo, played by Robert Vaughn in The Man from U.N.C.L.E., is introduced in 1964 as American television’s answer to James Bond. The pilot episode of The Man from U.N.C.L.E. titled “The Vulcan Affair” became the first episode of the series and was later made into the feature film To Trap a Spy. Napoleon Solo’s first suit in this first episode is based in traditional American style, but it applies 1960s fashion trends to it. The suit overall is very much a product of 1960s fashions, and the trends of the decade pervade the suit in a much more exaggerated way than any of James Bond’s suits of the decade do. The suave American spy dresses quite a bit differently from 007. 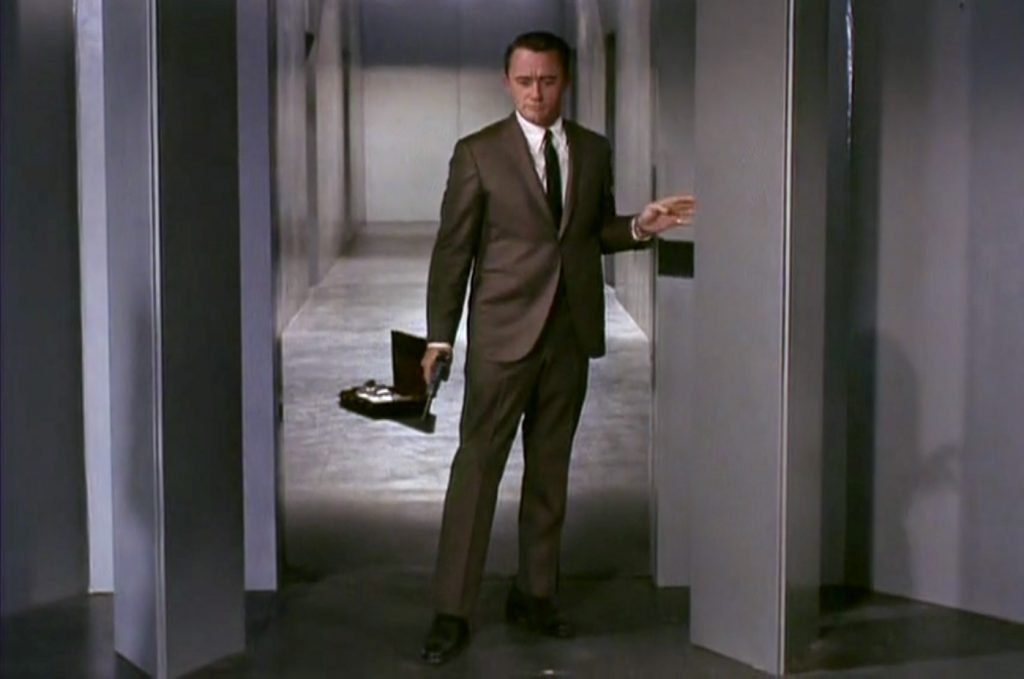 The suit is made of lightweight taupe wool, likely blended with mohair judging by the suit’s sheen. It is probably woven in brown and white yarns. The suit jacket is detailed in a very 1960s manner. The jacket has only a single button on the front and one button on each cuff. The narrow notched lapels are rounded rather than squared. The jacket has slanted pockets with narrow flaps, and both the lapels and the pocket flaps have swelled edges. The rear double vents are very short and about only four or five inches long.

In the American tradition, the shoulders are natural with little or no padding and the front has no darts. The lack of front darts makes the jacket look somewhat boxy, but it still fits closely and has waist suppression. The main different between a jacket with darts and a jacket without darts is that the one without darts has less fullness in the chest. Solo’s jacket has a very clean and close-fitting chest, whilst the waist is suppressed through the rear side seams and the darts under the arms. In following 1960s fashion, the jacket has a shorter-than-traditional length, but it is just long enough to cover the buttocks. This contrasts with today’s short jackets, which have no intention of keeping the buttocks covered. Vaughn has long legs, and the shorter jacket still makes him look out of proportion. The fashionably short length has the benefit of making the 5’10” Robert Vaughn look a little taller. Especially next to the 5’7″ David McCallum who plays Illya Kuryakin, Vaughn looks rather tall. 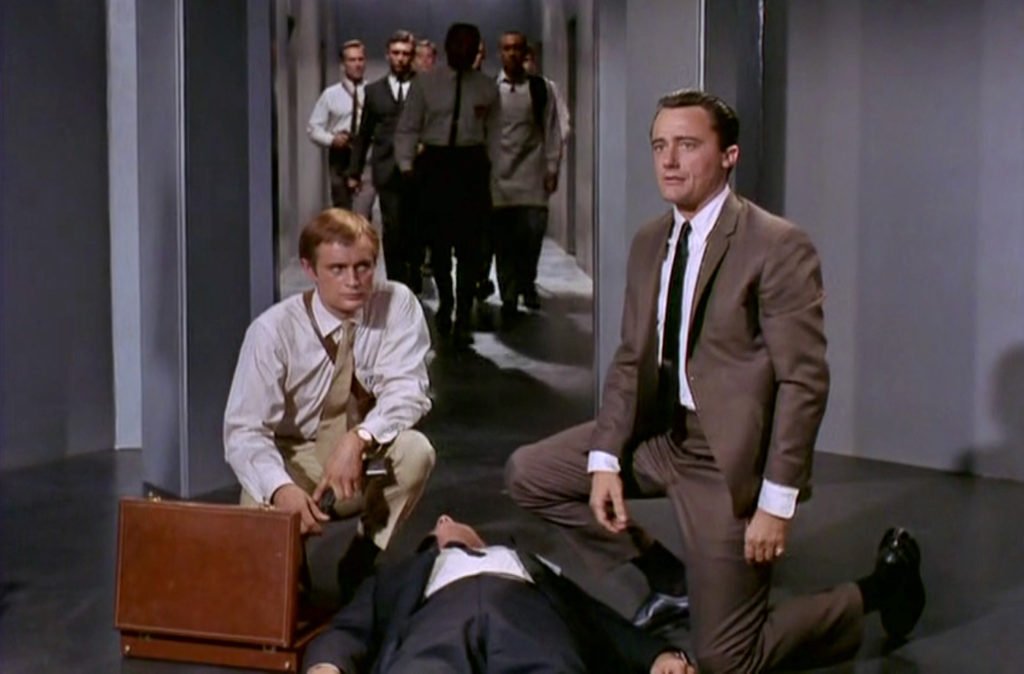 The suit trousers have a flat front, long rise, tapered legs and no belt loops. The long rise is the most significant part of Solo’s suit that separates it from today’s suits. It is long enough to almost meet the jacket’s front button. Going against American tradition, the trousers have plain hems. The trousers also are hemmed short, making these what some call high-water or flood trousers. It’s a traditional American style to hem the trousers too short, and Solo’s are about two inches above where the trousers would meet the shoes in front. The short hem shows off Solo’s black socks.

Solo’s white button-down shirt follows traditional American style just as many parts of the suit do. Likely made of oxford cloth, the shirt has a soft button-down collar, rounded single-button cuffs and a front placket. The narrow tie is black with a pronounced diagonal rib and tied in a small four-in-hand knot. The tie is held against the shirt with small tie clip placed just above the height of the jacket’s button. The tie clip is hidden when the jacket is buttoned. 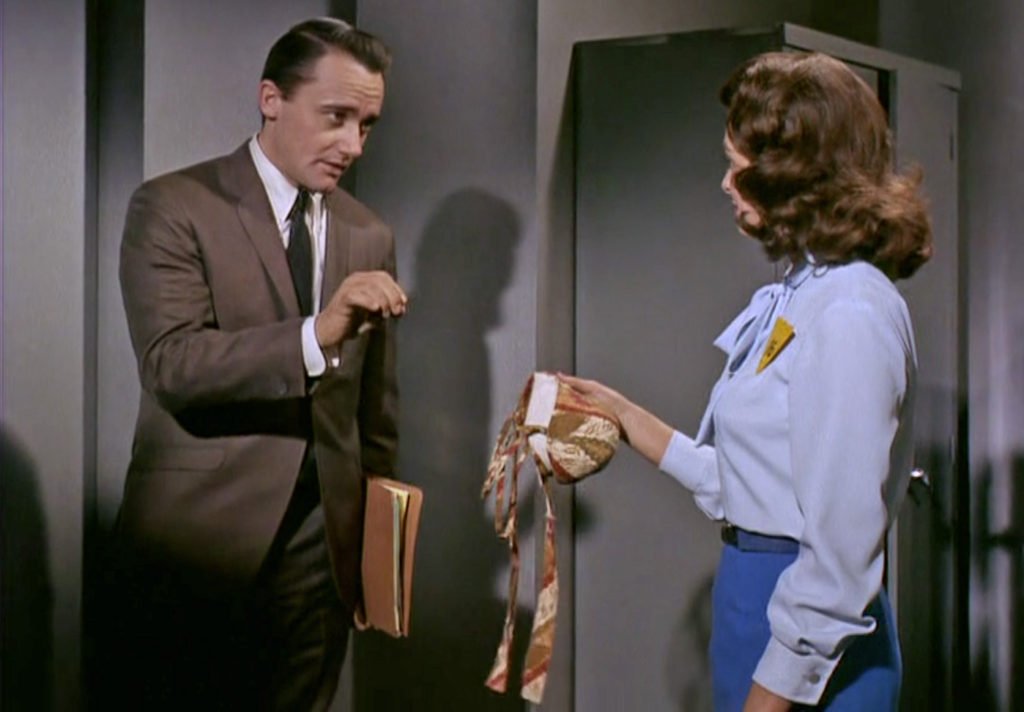 Solo’s black shoes are an American style of shoe called longwing bluchers. Longwings have a pointed toe cap like a wing-tip, but they have wings extending the full length of the shoe. Bluchers are similar to derbys in that they have open lacing, but on bluchers the vamp and quarters are one piece, and they have tabs sewn to the front for the lacing eyelets.

When off duty, Solo removes his jacket and tie, unbuttons the shirt’s collar and dons a beige cardigan. The heavy ribbed cardigan is mid-hip-length and fits close to the body. From the collar down to the hem, the front of the cardigan has seven smoke mother-of-pearl buttons, and Solo leaves the top button open. The cuffs have four smaller buttons, like what would be found on a suit jacket. The cardigan has a turndown collar, side vents and a patch pocket on the bottom of either side of the front. The cardigan’s front edge, the collar and the top of the pockets have black piping. The unbuttoned shirt reveals a white crew-neck undershirt, which is something Americans are accustomed to wearing. When the shirt is buttoned with a tie, a crew-neck undershirt follows the base of the shirt’s collar so the outline of the undershirt’s neck does not show. With the shirt unbuttoned, however, a crew-neck undershirt is distracting. 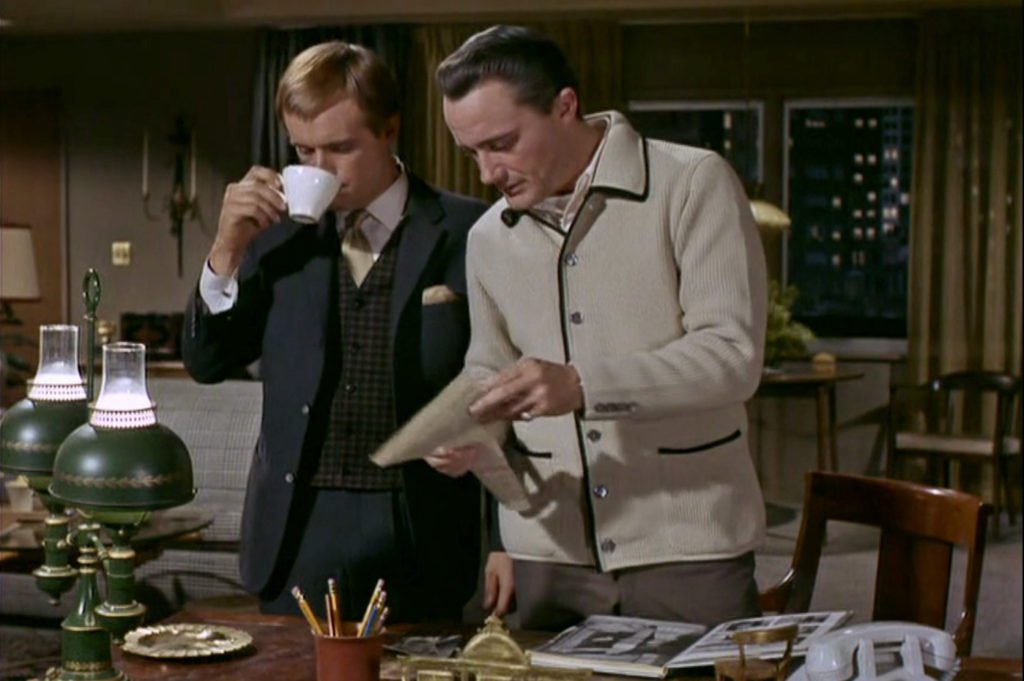 Though fans of certain American and 1960s fashions may appreciate this outfit, I suspect many fans of James Bond’s style will not. The fashionable and American style of Napoleon Solo differs considerably from the more traditional and English style that James Bond wears the same year in Goldfinger. After the first episode of The Man from U.N.C.L.E., Solo’s clothes became a little less fashionable, but also less interesting.

On a Bond-related note, this episode of The Man from U.N.C.L.E. features a brief uncredited—but unmistakeable—appearance of Richard Kiel (The Spy Who Loved Me‘s and Moonraker‘s Jaws) as a thug.