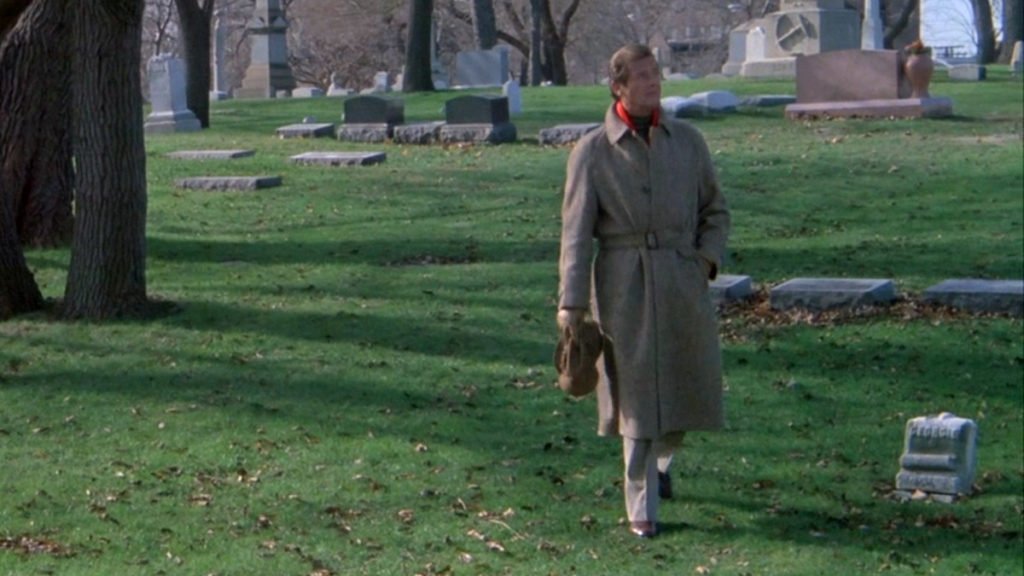 For the final scene of Roger Moore’s 1984 film The Naked Face, Moore wears a tweed balmacaan for a visit to a cemetery. Menswear author Alan Flusser defines the balmacaan in his book Dressing the Man:

A loose-fitting coat based on the original military version worn by the Prussian Army. Named for Balmacaan, an estate near Inverness, Scotland, it features raglan sleeves and a narrow, turned-down collar; both collar and coat are called “bal” for short.

Moore’s balmacaan is of the traditional length that reaches below the knee. Though long coats are typically more formal than shorter coats, the balmacaan is not a dressy coat. Thanks to the balmacaan, the warmth of a long coat need not be limited to dressing up. The relaxed raglan sleeves and loose A-line shape make this one of the least formal of long coat styles. Raglan sleeves extend to the collar without a structured shoulder and have a seam running along the top of the shoulder and down the outside of the arm. They offer more freedom of movement and comfort than set-in sleeves in exchange for their more relaxed look. The full A-line shape means that the balmacaan usually has a belt. The coat is excellent for casual use as Moore wears his in The Naked Face, though the full length means that it can also be worn over a suit, making the balmacaan one of the most versatile of coat designs. 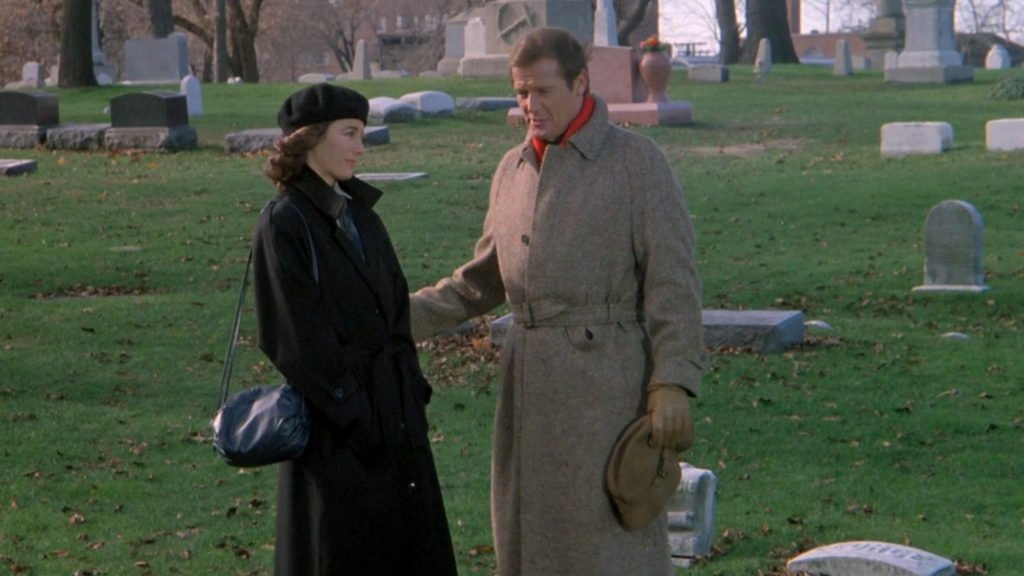 Balmacaans are typically either cotton gabardine—functioning as a single-breasted alternative to the trench coat—or an informal tweed. Moore’s is a dark brown and light brown herringbone tweed with red and yellow flecks. The coat’s collar is one of its defining features, which Flusser describes in Dressing the Man as “a high military collar that may be worn flat or turned up and buttoned. The collar is a band of material about three and a half inches wide, on a raincoat or topcoat.”

The coat buttons all the way to the neck for functionality over style. It has a fly front, though the top button fastens through to the outside. The raglan sleeves have straps at the cuffs. As mentioned before, the coat has a belt. Moore fastens the belt through the buckle and tucks the excess belt into the belt around his waist. There are slash pockets below the belt for hand-warming.

Though it may not be as stylish or as flattering as shaped coat like the chesterfield, the balmacaan prioritises comfort and functionality above all else. These aspects of the coat make is less formal but more practical. 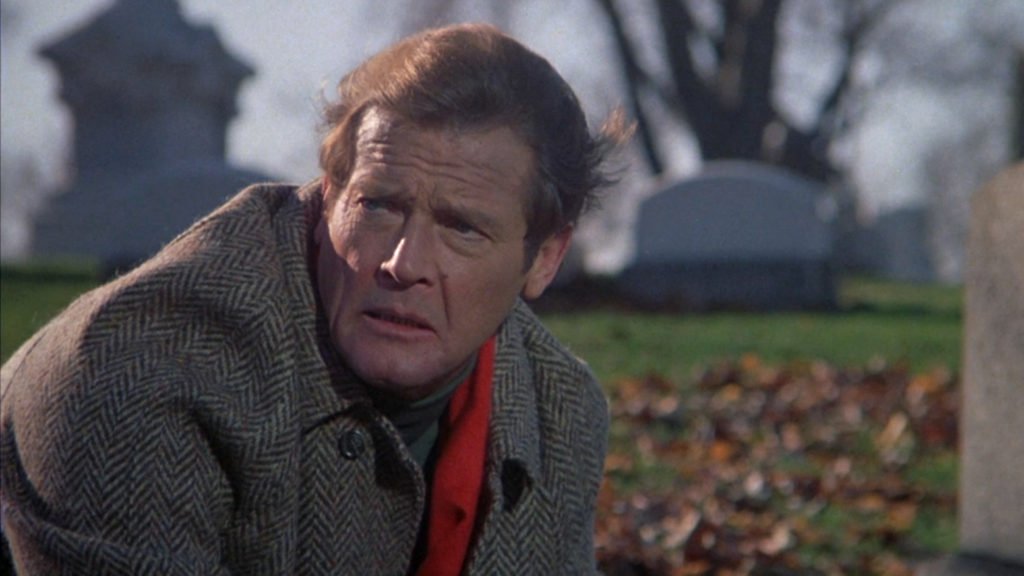 Moore’s coat is detailed with black plastic buttons that have subtle “B” engraved on them. I do not recognise what brand the “B” stands for.

Under the coat, Moore wears a rifle green cashmere polo neck jumper, beige trousers—possibly of wool gabardine or cavalry twill—and chestnut brown shoes—likely the loafers he wears elsewhere in the film. His scarlet red scarf draped inside the coat picks up the red flecks in the coat. The combination of a brown coat, green jumper and red scarf complement each other and flatter Moore’s warm complexion, but nevertheless at the expense of looking as if he has dressed for Christmas. At this time of year, it would be quite appropriate.

Moore’s outerwear accessories include tan gloves, possibly of deerskin or peccary, and a tan bucket hat that he carries. 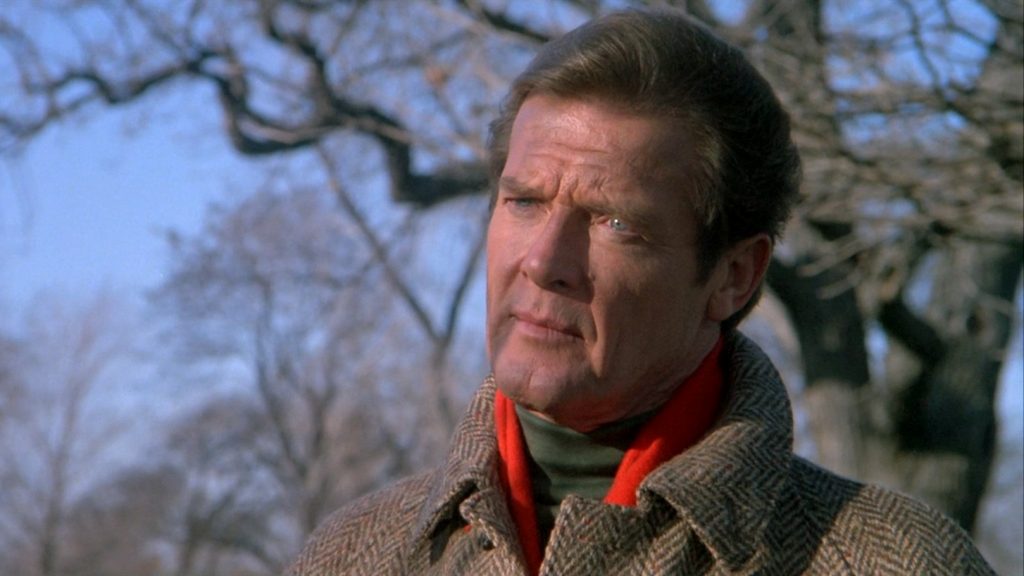 Though this outfit fits Moore’s character of psychoanalyst Dr Judd Stevens in The Naked Face, it is hardly something James Bond would wear. A balmacaan isn’t streamlined enough for Bond, though its full cut could be useful for concealing a firearm. The colour combination is not something we would see Bond wearing. Not even on Christmas!

Shades of Beige in Menswear