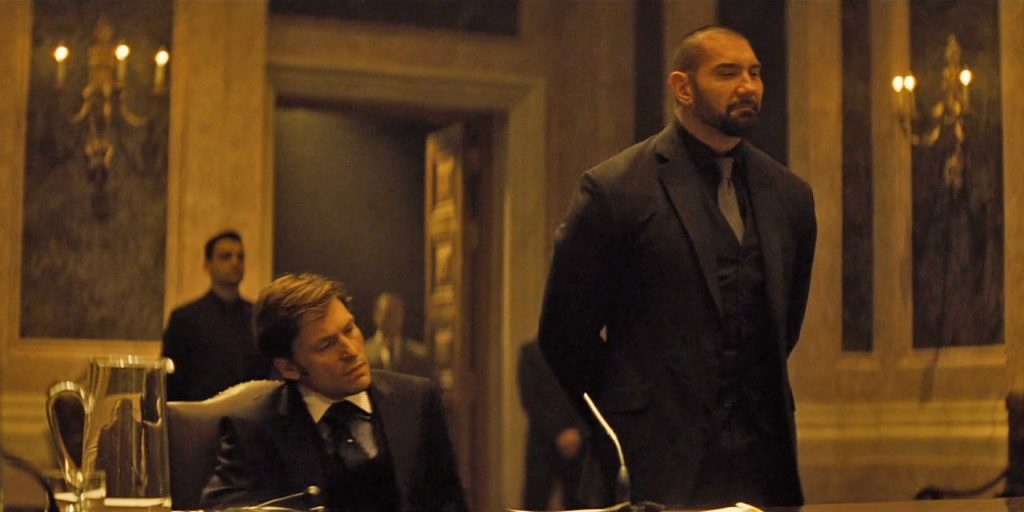 When Dave Bautista’s Mr Hinx is introduced in Spectre at a SPECTRE meeting, he is dressed the part of a classic henchman in a midnight blue suit and dark shirt. The dark suit and dark shirt is a classic bad-guy look, and with Hinx’s large frame it recalls the look of a more legitimate occupation: a nightclub bouncer. Hinx’s bespoke suit from London’s Timothy Everest is considerably finer than that typically worn by bouncers, but the effect is the same. No matter how fine the suit, matching a dark shirt with a dark suit will always lack a certain sophistication in exchange for looking bad and tough, but Hinx does the all-dark look as well as one possibly could.

Despite the overwhelmingly dark outfit, Hinx is meant to be a refined henchman. A three-piece suit gives an air of sophistication over a standard two-piece suit, showing Hinx as a man who cares about the way he dresses. While the suit looks black on screen, costume designer Jany Temime chose midnight blue for this suit instead of black. Midnight blue is really blue-black and can look blacker than black under artificial light. Since we only see Hinx wearing this suit only at night, and the film has a yellow tint over it, the suit looks completely black on screen. Midnight blue may have been chosen either because it shows Hinx prefers to wear something more interesting than a flat black suit, or it may have been chosen considering the yellow tint of the film so Hinx’s suit looks blacker and more menacing than the other men dressed in black. Many of the black suits that the other men wear in the meeting scene look more brown due to the film’s yellow tint. 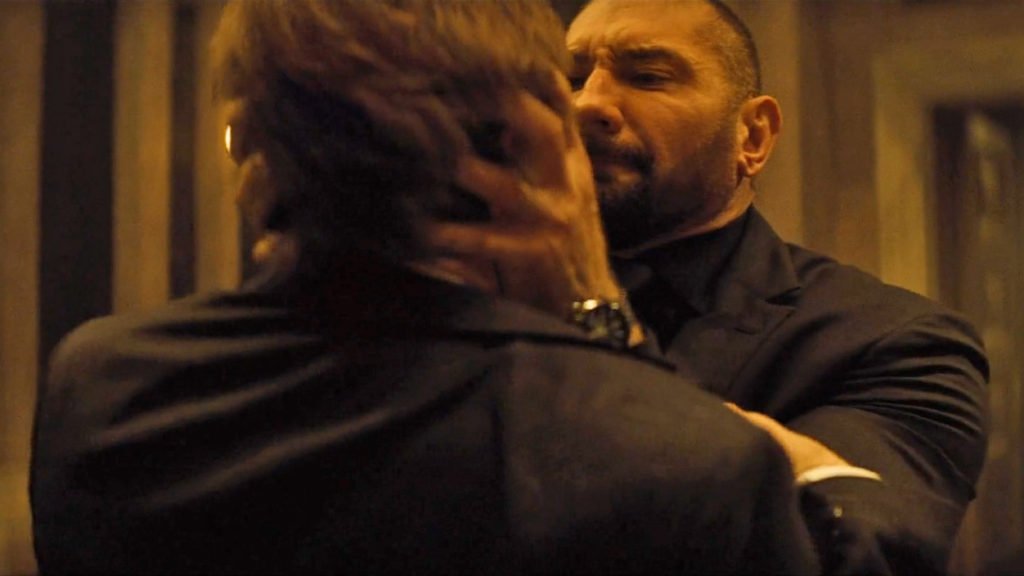 Since Dave Bautista is a well-built, muscular man, Timothy Everest had to work hard to fit him well. The button two jacket is tailored in an English fashion with straight shoulders on the natural shoulder line and roped sleeve heads for an elegant silhouette. The body is elegantly shaped with a fully chest and a suppressed waist, and the stiff structure inside the jacket means that the shape and silhouette are still present even when Hinx wears the jacket open. The jacket is detailed with double vents, slanted flap pockets and four buttons on each cuff. The suit’s buttons are black horn. The cut is the same as Hinx’s light brown suit that he wears later in Spectre.

The suit’s waistcoat has six buttons with five to button, spaced apart on the tall 6’6″/198 cm Bautista. The bottom button is placed on the cutaway portion of the bottom of the waistcoat so it cannot button. Hinx’s suit trousers are cut with a flat front and tapered legs. The trousers most likely match the trousers of the brown suit with slide-buckle side-adjusters, slanted side pockets, one rear button-through pocket on the right and plain hems. 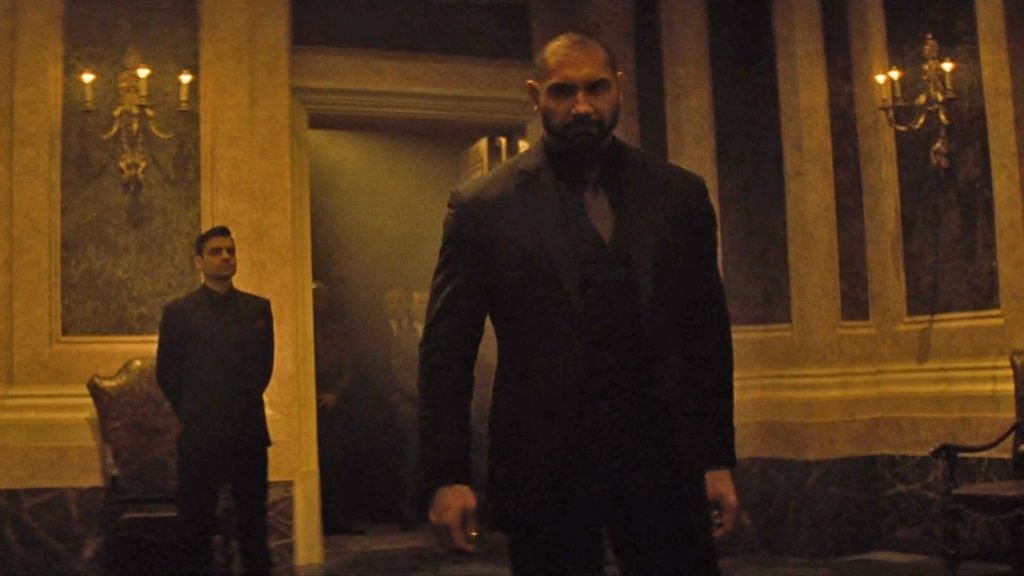 The shirt is most likely black because it doesn’t have the same cool tone that the suit has, although the shirt could be midnight blue to match the suit. A black shirt with a midnight blue suit has a similar effect to a midnight blue dinner suit with black trimmings. The different materials means there is less of a possibility that the two close colours will clash. The shirt has a spread collar and button cuffs. The tie has gold pindots on either a black or navy ground. Hinx ties it dimpled in a four-in-hand knot.

Overall, Hinx is well put-together, but he’s well-dressed whilst still looking like a henchman rather than like Bond’s equal. A dark shirt, when worn with a dark suit and a tie will always lack sophistication, no matter the quality. Hinx is both attempting to dress in a refined manner and trying to look like someone whom you should not mess with. He shows off that he’s a mean man while Bond—with his balanced outfits of light and dark—appears to be more of a gentleman on the outside whilst keeping his tough side hidden. 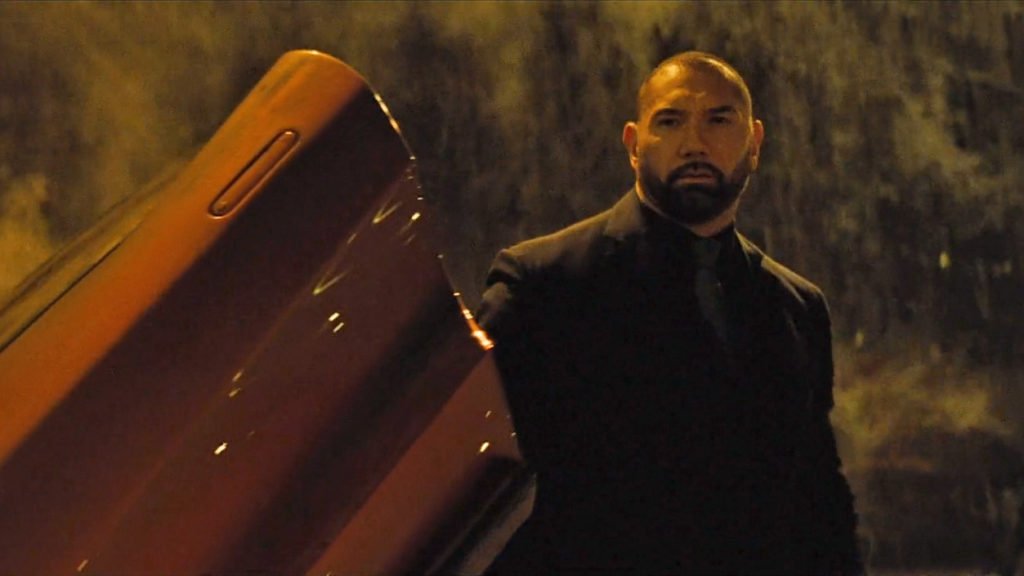