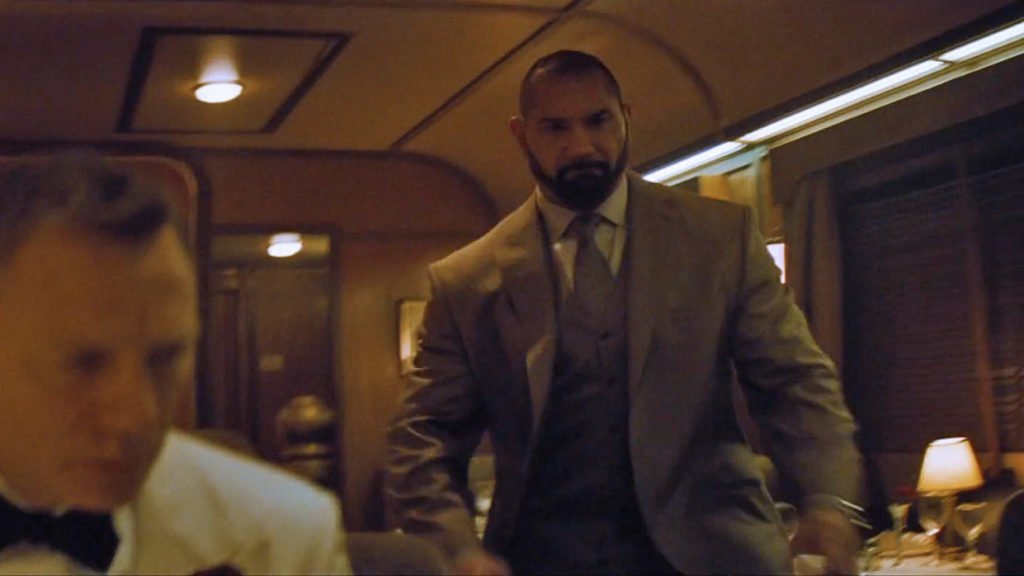 Sometimes the henchman in James Bond films are dressed better than their bosses, and Mr Hinx in Spectre, played by Dave Bautista, is one of these henchman. Bautista’s suits are tailored in an English style by London tailor Timothy Everest, who also tailored Ralph Fiennes and Christoph Waltz for Spectre. Bautista said about Hinx in an interview with Entertainment Weekly, “I really fought hard to not get typecast as your big, dumb muscle-head … But I wasn’t expecting the elegant wardrobe, the very manicured look.” 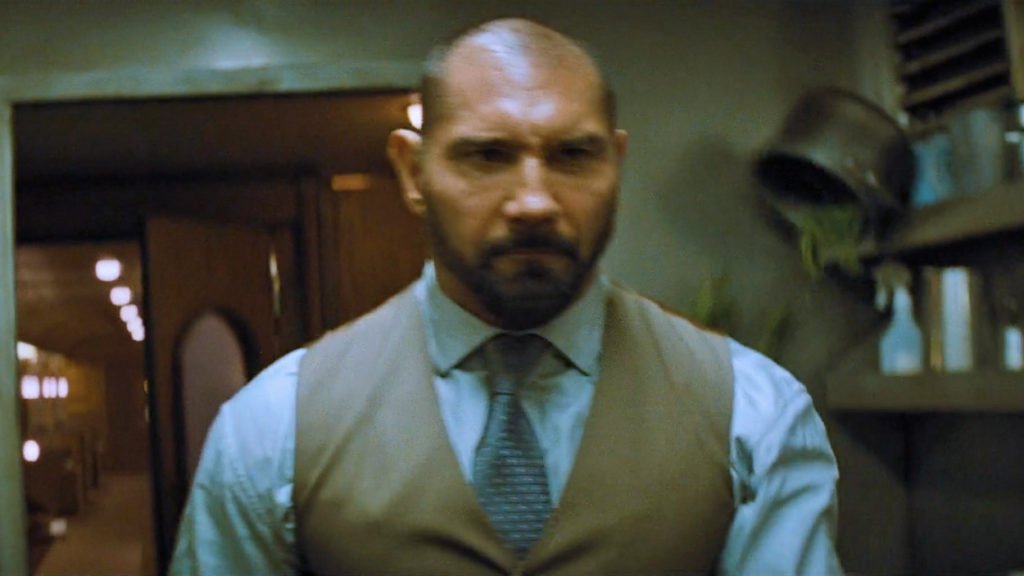 Hinx’s final scene in the film is an intense fight on a train travelling through Morocco, and for this scene he wears a three-piece suit that Everest says is made of beige Capri wool. I could not find much information on what capri wool is, but Versace sells clothes made from a blend of wool, cotton and polyester in an open weave that they call “Capri wool”. Though I can’t imagine a great tailor such as Timothy Everest would care to work with a cloth blended with polyester, polyester’s wrinkle resistance looks great on camera. Hinx’s suit looks very crisp for a lightweight suit, so perhaps it does have a small amount of polyester. And though Everest calls the suit beige, it’s darker and richer, more of a light brown. The light brown colour helps Bautista’s dark, warm complexion shine whilst also fitting in with sandy Morocco. 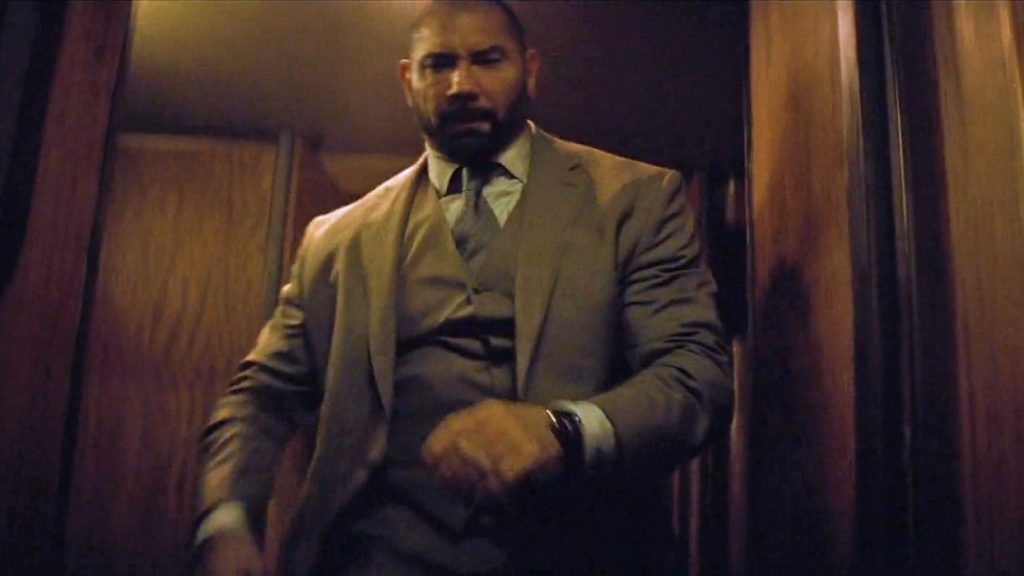 Bautista is a huge, muscular man, and this type of body is very difficult to fit. Since he is always in motion, the fit of his suit cannot be judged from what we see in the film. The button two jacket is tailored in an English fashion with straight shoulders and roped sleeve heads. Padding in the shoulders of Hinx’s suit jacket is used to straighten the shoulders rather than to build them up. The padding helps the cloth to drape over his shoulders neatly and elegantly. The jacket is detailed with double vents, slanted flap pockets and four buttons on each cuff. 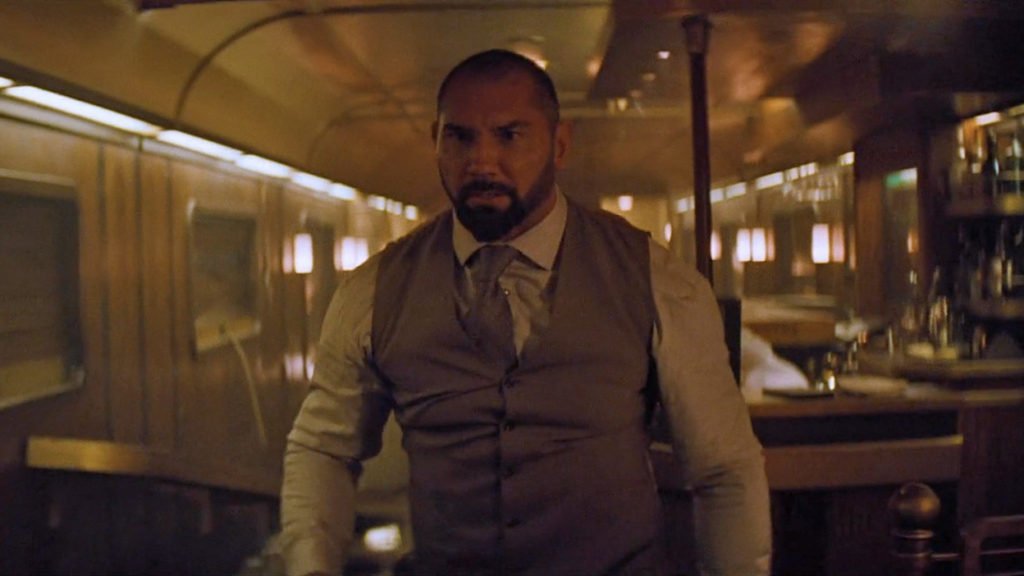 The suit’s waistcoat has six buttons with five to button, spaced apart to cover Bautista’s large frame. The waistcoat does not lay cleanly on Bautista’s large body, which may have been intentional, however, waistcoats are the most difficult garment to cut as they are required to fit the body more closely than any other garment. Though the armholes of the waistcoat are cut in an ordinary manner, they accentuate Bautista’s broad and muscular shoulders that burst out of the armholes when we see him without the jacket. Removing the singed jacket removes the sophisticated menace from Hinx’s appearance and replaces it one of pure menace. Without the jacket on, the shiny copper satin back of the waistcoat is revealed, flashiness that identifies him as a villain. The jacket is also lined in the same copper satin material. 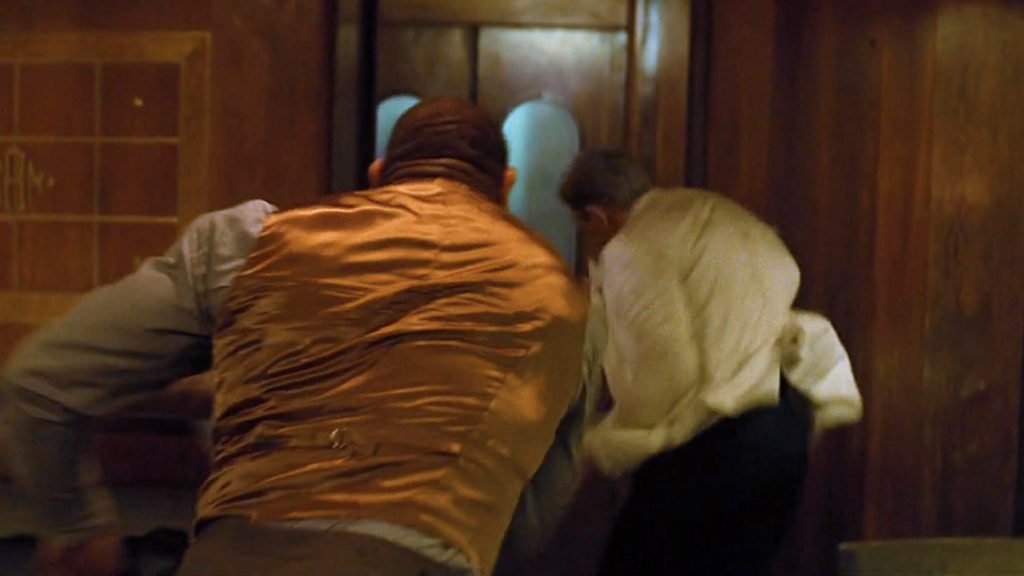 Hinx’s suit trousers are cut with a flat front and tapered legs that have plain bottoms. The trousers have slide-buckle side-adjusters, slanted side pockets, one rear button-through pocket on the right.

Hinx’s shirt is a microcheck, probably in grey and white. It has a wide but short spread collar and rounded single-button cuffs. The shirt’s buttons contrast the shirt in brown. Hinx’s tie is grey with black lines and white dashed lines horizontally across it. He ties it in a four-in-hand knot. Hinx’s socks are light brown and his shoes are chestnut brown that fasten with monk straps and have Dainite studded rubber soles. The shoes have a sleek, modern English last with a chiselled toe that make Bautista’s large UK size 12 feet look elegant. Though Crockett & Jones only takes credit for supplying Daniel Craig’s shoes for Spectre, these shoes resemble their Monkton model. The Monkton does not come with Dainite soles, but it’s entirely possible that Crockett & Jones made the shoes especially for Bautista with Dainite soles. 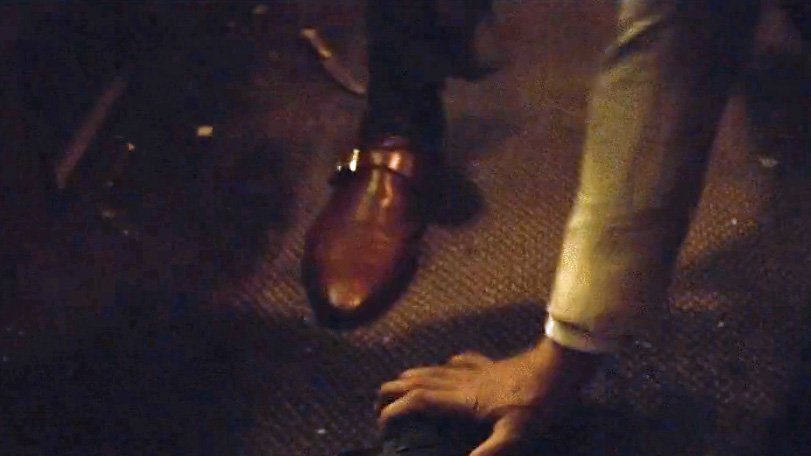