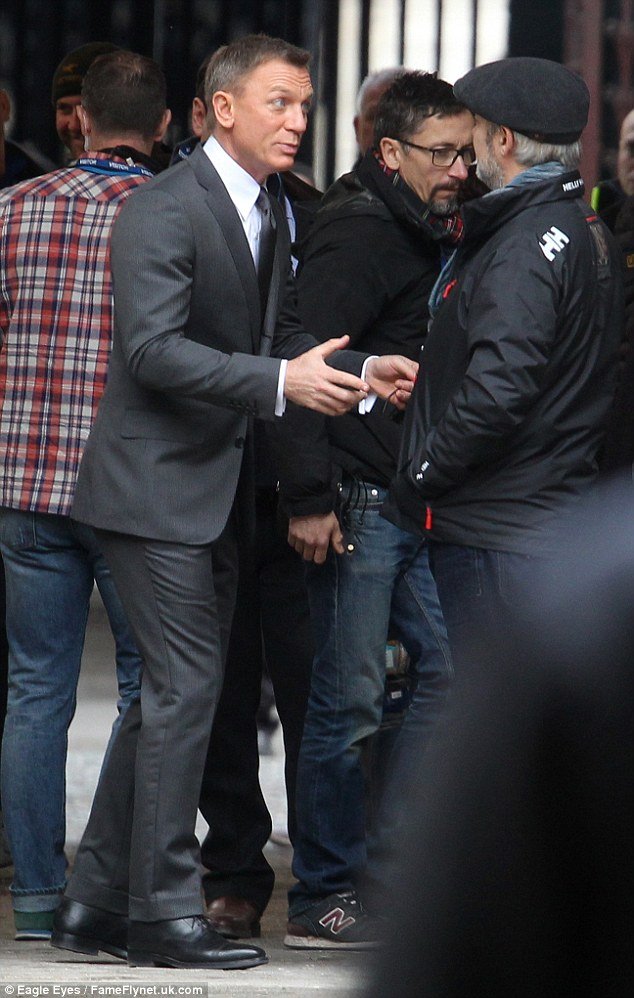 Spectre has been filming in London as of late, and James Bond is appropriately dressed for the city in a grey pinstripe suit and “Crombie” coat. There are many photos at Daily Mail. The Tom Ford suit is a combination of styles from Quantum of Solace and Skyfall, but it’s also something new. The suit is dark grey with narrow-spaced white pinstripes, which makes the suit look medium grey overall.

The suit jacket goes back to the Quantum of Solace buttoning arrangement of three buttons with the lapels rolled to the middle button. The lapels are narrow, but not overly so. The shoulders are straight with a little padding, the chest is clean and the waist is very suppressed, with only a little pulling at the button. The fit is much cleaner than the fit in Skyfall. The jacket has a single vent and slightly slanted pockets. All of each cuff’s four buttons are fastened, something unusual—but an improvement—for Craig’s Bond’s who usually leaves the last button open on his Tom Ford suits. The last buttonhole is longer than the rest, as usual for Tom Ford’s suits.

The biggest problem with the suit jacket is its length. Like the suit jackets in Skyfall, it’s about an inch too short—or perhaps two inches too short if you want a traditional English length. The too-short jacket emphasises his hips more and takes away from his masculine physique. In addition to being fashionable, the shorter length may be done to make Craig look taller. Overall, the fit is a huge improvement over the suits in Skyfall, and costumer designer Jany Temime has corrected some of the mistakes she made in her first Bond film.

The trousers have a flat front with side adjusters and turn-ups. Turn-ups with flat front trousers has a long tradition in America, and now with Bond since he has been wearing non-pleated suit trousers with turn-ups since The World Is Not Enough. The legs are narrow, but they have enough room to allow Bond to move around without constraint. The rise looks extremely low, but the trousers also appear to be sagging. Even with the sagging, the rise is still lower than it should be to ensure that no shirt and tie show beneath the jacket’s fastened button. They don’t look particularly comfortable around the fork.

The white shirt has a point collar—which is rather un-British—and double cuffs. The tie is grey and may be solid or have a discreet pattern. The tie is tied in a four-in-hand knot with a well-formed dimple. Bond’s shoes are are black five-eyelet, cap-toe derby shoes on a chiselled last with Dainite studded rubber soles, and most likely the Crockett & Jones Norwich model. Bond also wears Tom Ford sunglasses in some photos. 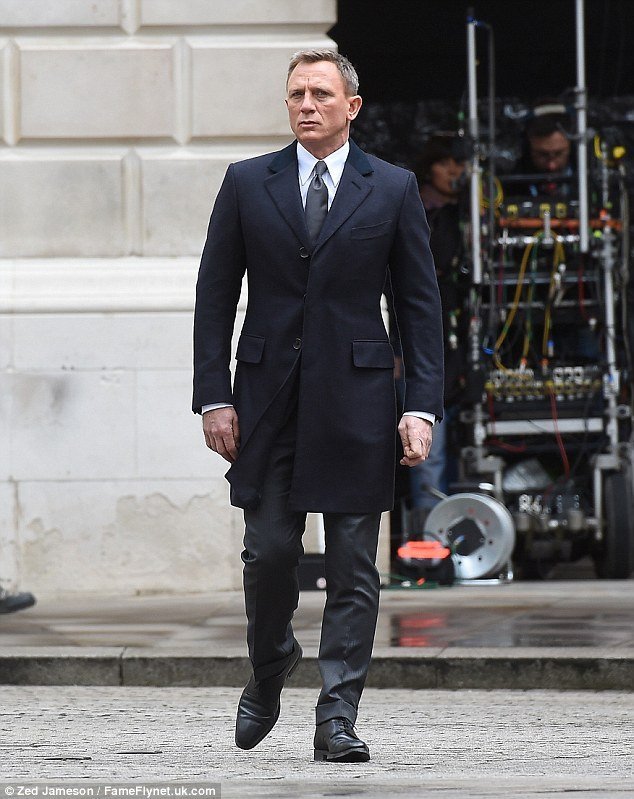 The navy “Crombie coat” is made by Tom Ford in Crombie’s famous style. The “Crombie coat” is essentially a three-quarter length chesterfield, and most classically in navy. Crombie has long been so well known for making this type of topcoat that the style is universally known by the brand name. Tom Ford only sets this coat apart from Crombie’s models with his curved “barchetta” breast pocket.

The topcoat is fitted with straight shoulders, a clean chest and a suppressed waist. The front is darted. In following the classic Crombie style, Bond’s Tom Ford topcoat has a navy velvet collar, a fly front with three large hidden buttons, straight pockets with flaps, a single vent and three buttons on the cuffs. Bond only fastens the middle button, which detracts from the elegance of the fly front because the top and bottom buttons are visible. And if the purpose of wearing a topcoat is to stay warm, why only fasten one button? It looks too tight to have the top button fastened anyway, which makes this a poorly fitted coat. The sleeves are also too short. The sleeves on an outercoat should be long enough to cover the shirt sleeves but not get in the way of the hands. Sleeves should be longer for the most warmth. The navy three-quarter coat with a velvet collar recalls Roger Moore’s double-breasted chesterfield in Live and Let Die. It’s just one of a few elements of Bond’s wardrobe in Spectre that has similarities to the clothes in Live and Let Die.